"Sunu Jant (Little Sun)" ia a solar-powered artwork to get light to the 1.6 billion people in the world with no access to electricity. The exhibition includes a series of photographs and sixteen short films by young, emerging filmmakers from Africa, the Middle East, Asia, Europe, and the Americas made in response to an invitation from Olafur Eliasson to produce works about light, energy and Little Sun. 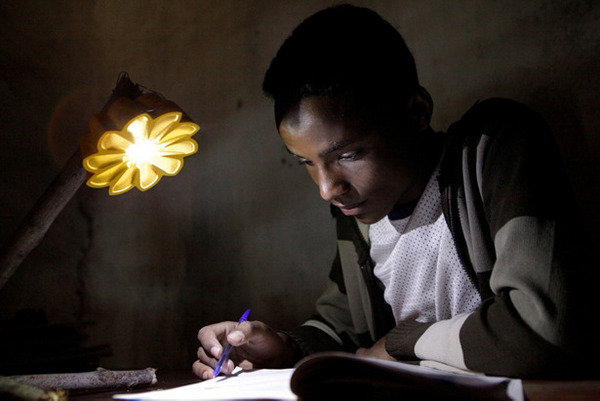 Suñu Jant is a Wolof phrase that means "our sun." From 28 February to 30 March 2013, Raw Material Company features Little Sun, a solar-powered artwork developed by acclaimed artist Olafur Eliasson and engineer Frederik Ottesen to get light to the 1.6 billion people in the world with no access to electricity. Suñu Jant marks the beginning of an ambitious plan to distribute Little Sun in Senegal, spearheaded by Raw Material Company.

Since the early 1990s, Danish-Icelandic artist Olafur Eliasson has continually pursued ideas of sharing and sensing space. He explores and challenges people's patterns of perception, finding nature a constant source of fascination, inside as well as outside. Little Sun is a powerful reminder that we share the same fundamental needs all over the world—happiness, love and light in our lives.

"The African continent possesses abundant natural energy resources, and yet sustainable forms of energy supply are not widely available to its population. Africa provides an ideal ground for discussing this urgent global energy crisis. Raw Material Company is very happy to join Little Sun in spreading light and safe energy in Senegal."—Koyo Kouoh

About Olafur Eliasson and Frederik Ottesen
Olafur Eliasson's critically acclaimed works have appeared in and been collected by major museums around the world since 1997. In 2003, he installed The weather project in Tate Modern, London, which was seen by more than two million people. Take your time: Olafur Eliasson, a survey exhibition organised by San Francisco Museum of Modern Art, travelled until 2010, stopping in New York in 2008 at MoMA and PS1. Seu corpo da obra (Your body of work, 2011) engaged three institutions around São Paulo and spread out into the vast metropolis. Projects in public space include The New York City Waterfalls, commissioned by Public Art Fund in 2008 with the support of Mayor Michael Bloomberg. Harpa, the Reykjavik Concert Hall and Conference Centre for which Eliasson created a crystalline façade, was inaugurated in August 2011. Little Sun, developed with Frederik Ottesen, was shown at Tate Modern this past summer as part of the London 2012 Festival and at Common Ground, La Biennale di Venezia: 13th International Architecture Exhibition in Venice. Eliasson is a professor at Berlin University of the Arts. www.olafureliasson.net

Frederik Ottesen is an experienced entrepreneur with a background in mechanical engineering and economics. In 2012 he co-founded LittleSun GmbH with artist Olafur Eliasson. A strong believer in sustainable technologies, Ottesen also works closely alongside Solar Flight's engineers and aviators in developing the company's new projects, such as the world's first two-person solar-powered airplane. He is the CEO of Matriks A/S, a software company he started in 1998. He lives and works in Copenhagen.

About Raw Material Company
Raw Material Company is a not for profit center for art, knowledge and society. It is an art initiative unfolding within the realms of exhibition making, creative residencies, knowledge sharing, and archiving and production of theory and criticism. It works to foster appreciation and growth of artistic and intellectual creativity in Africa.