The exhibition "Egyptian Chemistry - Deep Weather - Sahara Chronicle" presents a selection of Ursula Biemann's large-scale projects in spatial staging, focusing on two works: a single channel projection and an installation. Vadim Zakharov and Niklas Nitschke have worked together under the name Obamainberlin travelling though the German-Polish border regions, which they explore as a 'dead zone' by way of absurd, open-ended acts. 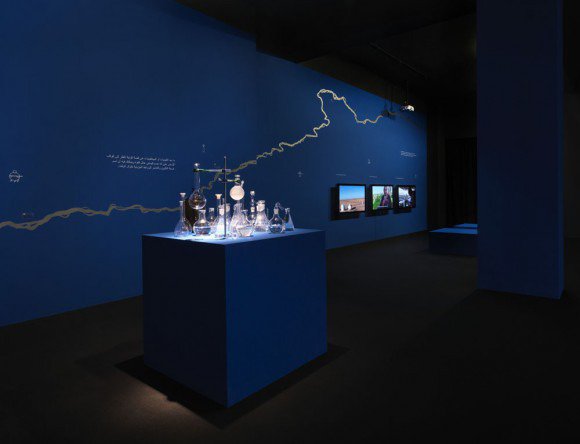 The exhibition Egyptian Chemistry – Deep Weather – Sahara Chronicle at Neuer Berliner Kunstverein presents a selection of Biemann’s large-scale projects in spatial staging, focusing on two current works that are shown for the first time on the European continent: the single channel projection Deep Weather (2013), which offers insights into the global causes and impacts of climate change, and Egyptian Chemistry (2012), an installation with a water laboratory and a five channel video that sheds light on the hybrid ecology of Egypt and the role of the Nile in this system. To complement the two new works, Sahara Chronicle (2006–2009) investigates clandestine migration routes within northern Africa, but also the points where labor migration and the overexploitation of resources like uranium and fisheries intersect.

Subtle and profound, Biemann’s work makes use of existing knowledge, reflecting upon correlations and subjective impressions and combining them with academic findings. Biemann’s artistic approach creates a new way of organizing knowledge and provides a platform for all actors upon which they can leave aside their classical roles as victim and enter into a differentiated dialogue on a par with the beholders. The non-linear narrative structure that characterizes Biemann’s works presents a narrative and visual mosaic of impressions that ultimately compose a complex image. For this reason, her impressive works are not documentaries in the representative sense, but rather coalesce subjective statements of eyewitnesses with academic questions and contrast knowledge from the public media with surprising images and contrary viewpoints from politics, history, culture, and sociology.

Since 2009, Vadim Zakharov and Niklas Nitschke have worked together under the name OBAMAINBERLIN travelling though the German-Polish border regions, which they explore as a “dead zone” by way of absurd, open-ended acts. The exhibition at the Showroom of Neuer Berliner Kunstverein presents video documentations of actions, photographic works, and artifacts created as part of these artistic explorations.

Vadim Zakharov (b. 1959) lives in Moscow and Berlin. He is one of the best-known artists of Moscow Conceptualism and will represent Russia at this year’s Venice Biennale. Zakharov works with video, photography, installation, performance, typography, and computer graphics, consciously avoiding any clear interpretation. He works with fictional characters, most recently with the “stupid Father Zond from Cologne,” which he sets in relationship to one another with constantly shifting perspectives to create complex narratives. Like the Russian literature of the nineteenth century, the motif of failure is a constant motif in these humorous (self) stagings.

Niklas Nitschke (b. 1970) is currently based in Breslack, Brandenburg. He develops his artistic system of reference not only using his own works, but also with works of others. In the process, he isolates certain elements that he doubles in his complex, in part ephemeral work, achieving the absence of the object, and freeing the work from representation.