"Cairo. Open City" explores all kinds of practices used in the media of photography and video, including pictures by photojournalists, recordings made by activists and 'citizen journalists', and documents collected by artists. This project elevates the open aspect of the political process to a formal principle. "Blumenfeld Studio Color, New York, 1941-1960" uses a series of rediscovered, original photographs in its examination of the little-known history of Erwin Blumenfeld's photography studio at 222 Central Park South in New York. 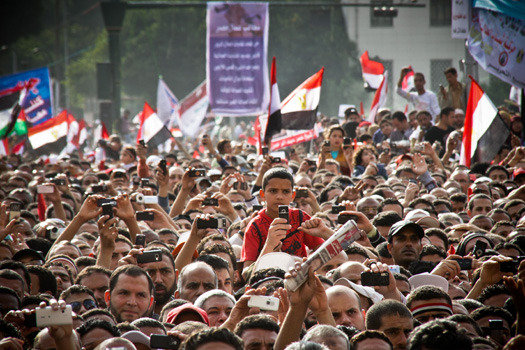 “Cairo. Open city. New testimonies from an ongoing revolution” is an experimental, continually regenerative exhibition project. Not only does it afford an insight into the freedom movement currently underway in the Arabian world but also seeks to write a new chapter in the history of images.

There are two different ways in which one can interpret the exhibition Cairo. Open city. The first looks to the political and social awakening of a generation that came to light with the onset of mass demonstrations on January 25, 2011 in Cairo’s Tahrir Square. This story is predominantly told by Egyptian artists and photographers, activists and curators. The second is linked to the role of images and new digital networks, which in part served to initiate the uprising, documented events and broadcast them to the entire world.

The exhibition explores a wide range of practices within the time-based media of photography and video, based on photographs taken by photojournalists, recordings made by activists and “civilian journalists” and documents compiled by artists. Photography and its diverse functions also come under the spotlight as a medium that is currently undergoing an important transformation: making opinions heard, influencing the course of events, creating images as recollections, commemorating victims and bearing testimony to events.

Based on the term’s meaning within the military, the title “Open City” references the exploitation of images in the battle for sovereignty over the public interpretation of events. At the same time, this meaning should not cause us to lose sight of the fact that it was not social networks or the Internet in general that brought about this revolution but rather the pent-up desperation and courage demonstrated by the people that took to the streets.

This extensive exhibition has been divided up into chapters and stations, curated by a team of renowned personalities from Cairo’s art scene, including artists Lara Baladi and Heba Farid, photographers Thomas Hartwell and Tarek Hefny, artist Jasmina Metwaly, filmmaker Philip Rizk and journalists Rowan El Shimi and Alex Nunns.

This is a collaborative project together with the Museum für Photographie Braunschweig. Funded by the German Federal Cultural Foundation.

The exhibition was realized in collaboration with the Goethe Institute.

The next stop on the exhibition’s tour will be Hamburg’s Museum für Kunst und Gewerbe.

A catalog to accompany the exhibition is due to be published in April 2013 by spector books, Leipzig.

Panel discussion
As part of the Cairo. Open City exhibition, a panel discussion will be held in April 2013 entitled “(De-)stabilization of an entire region? The political view of the changes in the Arabian world.” The event by the Ruhr Science Forum, the Institute for Advanced Study in the Humanities and the Institute for Diaspora and Genocide Research at Ruhr University Bochum has been realized in collaboration with the Centre for Mediterranean Studies at Ruhr University Bochum and Museum Folkwang.

During the 1940s and 1950s, Berlin-born photographer Erwin Blumenfeld (1897-1969) was one of the world’s most sought-after portrait and fashion photographers. His imaginative and unconventional photographic creations led to contracts with top US publications such as Vogue, Harper’s Bazaar, Life and Look. Blumenfeld Studio uses a series of rediscovered, original photographs in its examination of the little-known history of his photography studio at 222 Central Park South in New York.

After fleeing to the USA in 1941, the avant-gardist and experimental photographer Erwin Blumenfeld dedicated himself entirely to contract photography completed in his New York studio. Clothes, cosmetic products and fashion accessories form the focus of his stagings, which are in part intended to conform to the guidelines laid down by the magazines’ art directors, in part to the technical requirements of the lighting effects, makeup and props he used. Yet despite these limitations, Blumenfeld was always inventive, working with cropped images, multiple exposure, color filters, transparencies and a simple yet effective manipulation of pictorial planes.

In his carefully staged images, Blumenfeld not only looks to his own photographic creations but to art history alike, as a way of making us forget the commercial nature of the products advertised. In awe, Alexander Liberman, Art Director at Vogue, described him as “the most graphic of all photographers and the one who is most deeply rooted in the fine arts.”

The exhibition is centered on some 100 color photographs as well as a series of large-format slides that originally served as high-quality printing templates for contemporary fashion publications. After more than half a century, the images found in these faded photographs have been digitally restored. Furthermore, the vintage black-and-white prints and originals provide key insights into the magazine culture of the 20th-century, which was fundamentally shaped by Blumenfeld’s work.

The exhibition was devised and curated by Francois Cheval, Musée Nicéphore Niépce (Chalon-sur-Saône), Ute Eskildsen (Museum Folkwang, until autumn 2012) and Nadia Blumenfeld-Charbit, the photographer’s granddaughter. Florian Ebner, Head of the Photographic Collection at Museum Folkwang was in charge of the exhibition’s execution.