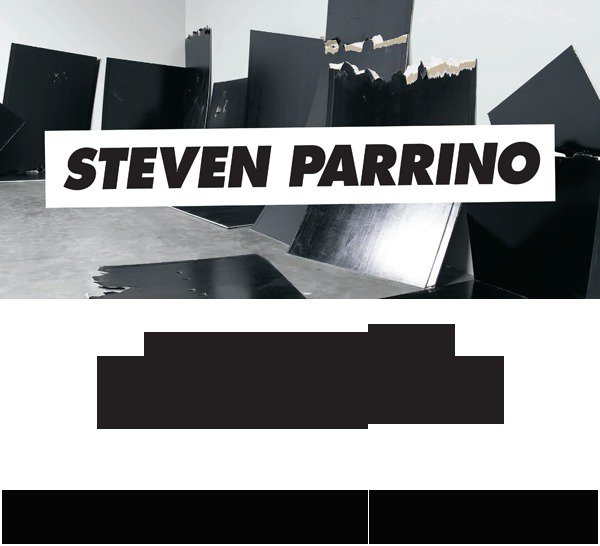 When I started making paintings, the word on painting was "PAINTING IS DEAD." I saw this as an interesting place for painting [...] Death can be refreshing, so I started engaging in necrophilia...
Steven Parrino

We are not painters.
BMPT

Bringing an extreme punk sensibility to bear on the history of abstraction, from the late seventies Parrino began to literally attack the canvas, piercing and tearing its surface, or twisting it off the stretcher to disrupt the conventional rectangular plane. These "misshaped" canvases painted in viscous enamel or lacquer, such as Spin-Out Vortex (Black Hole) (2000) and Skeletal Implosion (Thick Stripes) (2001), were in part muscular, performative responses to the refined aesthetics of abstract precedents. 13 Shattered Panels (for Joey Ramone) (2001) is a wall-size installation of plasterboard painted shiny black, a spontaneous and emotive abstract composition born out of destructive action and Parrino's shrine to the punk legend whose rock band, The Ramones, forever changed the American music scene of the late seventies with driving reductive guitar rhythms and a minimalist visual style of black leather and torn jeans.

A keen awareness of the history, semiotics, and spatial possibilities of painting, together with his allegiance to radical popular culture led Parrino to produce bold and unprecedented iterations of symbolic rupture. This daring leap imbued his paintings with a tremendous sense of objecthood and latent physicality, as well as powerful intimations of time, existence, and sublimated content.

Clear visual links can be made between the work of Parrino and two generations of European artists, beginning with BMPT. BMPT was founded by Buren, Mosset, Parmentier, and Toroni to challenge established methods of art-making and theorize a new social and political function for art and artists. In 1966-67, they presented five performative exhibitions, or 'manifestations,' that questioned authorial prerogative and the institutionalizing role of the Paris Salons. More broadly, BMPT reflected critically on the spectacular, self-conscious nature of the new avant-garde in France. They tested established ideas of artistic authorship and originality by implying that they often made each other's works, while emphasizing the objecthood, rather than the originality, of their paintings. Seeking to create art that was simple and self-evident, they suppressed subjectivity and expressiveness in favor of practical systems, such as the utilization of neutral, repetitive patterns and an apparent eschewal of aesthetic historical grounding, as in Buren's painting with its woven black and white stripes and undulating stretcher Peinture aux formes variables (1966), Parmentier's bold composition 30 Janvier 1968 with bright red bands of varying width, and Niele Toroni's metric square brush strokes in oil on canvas. This stance reached its apotheosis in the "zero degree paintings" of Mosset, with whom Parrino shared a close friendship and artistic affinities that resulted in occasional collaborations. One of more than 200 identical oil paintings of a small black circle at the center of white canvas one meter square produced between 1966 and 1974, Untitled (1970) aptly demonstrates Mosset's quest for formal purity that ended in total ambivalence.

Though attuned to the achievements of BMPT, Armleder, Barré, and Hantaï adopted looser, less orthodox attitudes. Armleder's art, which encompasses everything from abstract drawings to "sculptural furniture," performances, and photographic prints, is represented by CRE (Furniture sculpture) (1986/2006) a row of four identical utilitarian Eames chairs juxtaposed with a sober striped painting. From the seventies onwards, Barré explored the possibilities of systematic abstraction, changing course whenever a chosen system became too stable or predictable.In the spray paintings,he exchanged traditional brushwork for linear mark-making and chromatic contrast, creating the illusion that the final compositions were cut from larger ones. In 65-A (1965), a black line, spurting across the corner of a taupe ground, seems to transcend the limits of both canvas and frame. The spray paintings thus predicated Barré's subsequent work, where pictorial relationships operating within and between painting series became paramount. Hantaï is best known for his pliage technique, developed in the late fifties, which gave a paradoxically lyric quality to his compositions. Etude Reverdy (1969), a huge crumpled canvas in rich hyacinth blue, has a dynamic, variegated design emerging out of the process of folding and unfolding the painted material. Parrino would employ a similar technique, although with very different results.