Gemeine Wahrheiten. Pictures, drawings, collages and sculptures are testimony to the sheer wealth of Buttner's ingenuity and irony, but also to his biting sarcasm with respect to social realities. 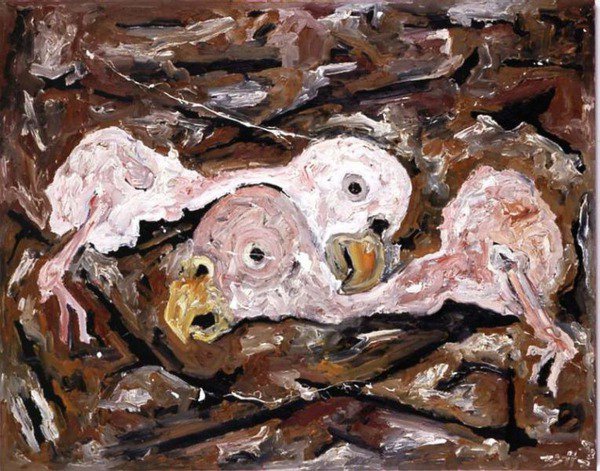 With the retrospective “Werner Büttner. Gemeine Wahrheiten” the Werner Büttner ZKM | Museum of Contemporary Art is to hold the most Gemeine Wahrheiten comprehensive exhibition to date of the work of Hamburg artist Exhibition Werner Büttner. Together with Martin Kippenberger and Albert Oehlen, the artist has continued to exert a sustained impact on the European art scene since the early 1980s. Pictures, drawings, collages and sculptures are testimony to the sheer wealth of Büttner’s ingenuity and irony, but also to his biting sarcasm with respect to social realities. The exhibition highlights the significance of Werner Büttner in the context of the development of late 20th century German painting to which he made a decisive influence, and presents him as one its central figures and pioneers. “At that time, no less than I do today, I took and continue to take painting Press Contact as seriously as I do my cookware or my car.” (Werner Büttner) Dominika Szope

At the beginning of the 1980s a vital, impetuous and at times radical painter’s scene began establishing itself in several centers of German art. The common attitude was one of provocative questioning of that which painting was or sought to be. With the choice of consciously trivial or absurd motives and themes, painting was reduced to the apparently ridiculous. Brusque rejection was the initial response to this art scene, the most important centers of which began crystalizing in Cologne, Berlin and Hamburg. With an apparently pointedly succinct painting style oscillating between abstraction and borrowings from the world of objects, the artists produced large-scale paintings, conceived as an assault on ‘good taste’ and ‘quality art’. Malice and cynicism towards the emerging neoliberal society of the Helmut Kohl era was the characteristic tenor of many of the works. In spite of the adopted “who gives a damn?” attitude, the art scene that gathered around Büttner was a decidedly political one. Alongside Werner Büttner, Martin Kippenberger and Albert Ohelen were also at the center of the former Hamburg painting scene to which the likes of Hubert Kiecol, Markus Oehlen and Georg Herold were also associated. “Büttners concept of art is more realistic. The only truth of the post- revolutionary phase runs: the tactic of survival also applies to art. (...) Thus, Büttner uses his pictures as a formula for battle, his paintings as a weapon with which he opposes, with which he attacks and defends himself. He attacks all and everything, even himself and painting. (...) His works thus have such wonderful, ironic titles such as Probleme des Minigolfs in der europäischen Malerei [The Problem of Minigolf in European Painting] (1982/1983) – ‘propaganda against everything’, ‘rebellious reinterpretation of mean truths.’” (Peter Weibel) The exhibition’s 300 paintings, drawings, collages and sculptures of the primarily comprise Werner Büttner’s works who, following the reinvigoration of object painting during the 1960s and 1970s, began to break with its illusionism and to finally strip it of everything bourgeois.

By Weserburg, Bremenway of his emphatically rough and coarse technique, Büttner turned against the accepted notions as to what abstract and object art should be. He recorded all written, oral or artistic expressions from his lifeworld, crushed the found both in terms of motif and content before going on to reassembling them into the picture, so that at times distinctive combinations emerge, such as “Stilleben mit Wolpertinger und beschädigtem de Chirico” [Still Life with Jackolope and Damaged de Chirico] (1984). In his more recent works, C-Prints, Büttner assembles the motifs – in spite of their proximity to digitally produced pictures – entirely by hand with a knife and scissors, making the inclusion of an entire range of expressive forms from the lifeworld even more evident.

No other artist from the Hamburg painter’s scene of the time cultivates such a cryptic treatment of language and its relationship to art as does Werner Büttner. Titles such as “Die Probleme des Minigolfs in der europäischen Malerei“ [The Problems of Minigolf in European Painting] (1982) or “Moderne Kunst kann man verstehen, moderne Welt nicht” [One can Understand Modern Art, but not the Modern World] (1985) testify both to his sinister humor and depth of discourse in art. Other titles, such as “Die Russische Revolution vom Hörensagen und in Öl” [The Russian Revolution from Hearsay and in Oil] (1985) or “Wetterfester Schmetterling” [Weatherproof Butterfly] (2008), again testify to Büttner‘s social criticism.

Curators at the ZKM: Peter Weibel and Andreas Beitin
The exhibition Werner Büttner. Gemeine Wahrheiten is to be held in cooperation with Weserburg Museum in Bremen, where the show can be seen from October 2013 onwards.

ZKM | Center for Art and Media