For his solo show Hughes has turned the gallery into a stage for a magic dance performed by a street gang of enchanted lamp posts, ice-cream-wafer garden walls, and broken memorial statues found in the most dilapidated and dark corners of (British) suburbia. 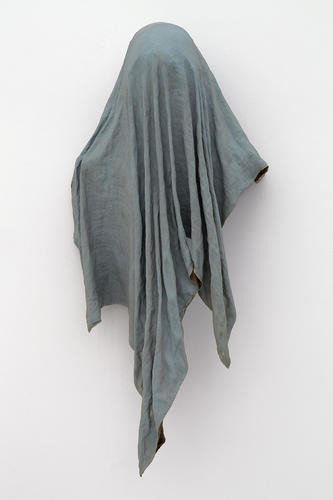 For his third solo show at Anton Kern Gallery, UK-based artist Richard Hughes has turned the gallery into a stage for a magic dance performed by a street gang of enchanted lamp posts, ice-cream-wafer garden walls, and broken memorial statues found in the most dilapidated and dark corners of (British) suburbia. With his first artist monograph freshly published by JRP Ringier and two recent solo exhibitions at Tramway Art Space in Glasgow and Firstsite in Colchester, England, Hughes' work is at the center of public attention.

Richard Hughes is known for his exceptional skill to turn ordinary, sometimes slightly repulsive objects that might be found in a hovel of a rooming house or unceremoniously dumped by the side of the road—bleak monuments to abused domestic or public spaces—into narrative sculptures. Their placement in a gallery space instantly invites questions as to its recent history, use, and function, or imminent action. Upon closer inspection, all objects reveal themselves as casts, meticulously crafted replicas of everyday things injected with an element of fantasy. The beauty within this ostensibly abandoned world lies in the moment of surprise when materials reveal themselves as "fakes." This is the moment when hidden images and cultural memories become visible and intelligible, when the vernacular becomes a universal language. Hughes' sculptures are not ready-mades. As facsimiles of common objects, it's not the object that is transformed, but its meaning and ability to speak to the viewer. Gradually, these objects-turned-sculptures reveal their inherent capacity to tell stories, to evoke narratives that are charged with everyday life experience and humor.

Richard Hughes has had solo exhibitions at Tramway, Glasgow (2012); Sculpture Court, Tate Britain (2006); The Showroom, London (2004), and is currently presented at Firstsite, Colchester, UK, in an exhibition titled Time is over, time has come. His work has been exhibited internationally, including presentations at the François Pinault Collection, Punta della Dogana, Venice (2009); the Schirn Kunsthalle, Frankfurt (2008); and the Museum Abteiberg, Mönchengladbach, Germany (2006). Hughes was selected for the 55th Carnegie International, Carnegie Museum, Pittsburgh (2008); the fourth Liverpool Biennial (2006), and the British Art Show 6 (2005). He was nominated for the Beck's Futures award in 2006 and was the recipient of the EAST International award in 2003.