Sleep is for the Gifted. Known for his performances and curatorial interventions, Johannesburg-based artist Wa Lehulere presents an installation composed of recent drawings, photographs, sculptural works and video. 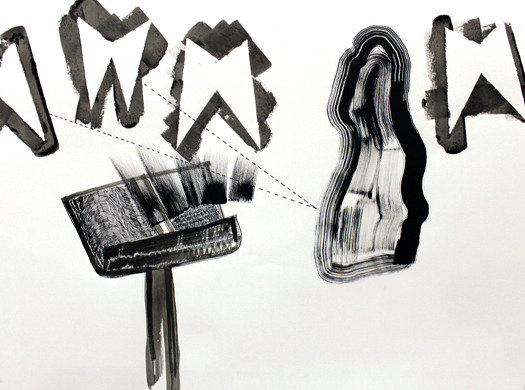 The exhibition's title—Sleep is for the Gifted—hints at both the artist's chronic insomnia and his obsession with the resurfacing of buried memories of apartheid greatly felt by the younger generation of South African artists. This new series is inspired by a myriad of pre-existing sources: short stories, theater, the artist’s own writings, and fragments culled from newspaper articles. Wa Lehulere creates events and environments as an attempt to understand both South Africa’s past and present. The artist’s acts of extraction and translation form a personal and cultural palimpsest; the ongoing process of re-writing and re-authoring begins to constitute the texts themselves.

Wa Lehulere embraces the ambiguity of his practice, opening up a discursive space between past and present, art and literature, the self and the collective. His drawings exist within this psychological space, straddling symbolism and abstraction, drawing from both personal and collective iconographies. The artist’s ink drawings evidence his compulsive attempts at articulation, producing meaning in the physical act of production and reproduction. Wa Lehulere’s unique blend of formal and representational exploration gives his drawings a sense of mystery, leaving them open to each viewer’s interpretation. For Sleep is for the Gifted, he is also producing site-specific chalk drawings on the gallery’s walls, utilizing his own visual vocabulary, referencing long-standing traditions of wall painting and highlighting the ephemerality of the medium itself.

His Polaroid photographs read as quick glimpses into the artist’s archaeological methods: soap suds and a pair of hands outstretched could belong to the guilty Lady Macbeth or Winnie Mandela, accused of conspiracy in the murder of African National Congress activists. Another photograph shows the artist, his face obscured by a newspaper whose headline declares a woman’s failure as a Sangoma—a traditional healer who uses bones as a means of communication with the spiritual world. The fogged frames of these Polaroids emphasize their technical obsolescence, highlighting the aspects of South African past that resist accommodation to the structural tools of the present.

These performative gestures of unearthing and re-writing history flatten the distance between time, space, and media—suiting themselves to Wa Lehulere's interdisciplinary use of drawing, sculpture, photography, and video.

Kemang Wa Lehulere (b. 1984, Cape Town) is a multimedia artist who currently lives and works in Johannesburg, South Africa. His work has been exhibited internationally, most recently in The Ungovernables, The New Museum, New York; Air de Lyon, Fundacion Proa, Buenos Aires; Thirty Minutes of Amnesia: Act I, Goethe Institute, Johannesburg; and the 11th Biennale de Lyon, A Terrible Beauty is Born. With the Center for Historical Reenactments, Wa Lehulere will complete a residency this year at the New Museum, New York, as part of their Museum as Hub initiative. He will also be in residency at the Rijksakademie, Amsterdam, later this year and will participate in a group show at La Maison Rouge, Paris, this May.