Brown's most recent paintings treat the subject of the nude ensemble, revealing an attitude that draws equivocally from the genre of history painting and pop culture. By freeing her subjects and inspirations from their original contexts, Brown subverts the role of narrative. Exhibited in its entirety, 'The Lost Album' by Dennis Hopper reveals casual portraits of artistic luminaries, leading actors and mythic musicians, as well as stirring images of the Civil Rights Movement. 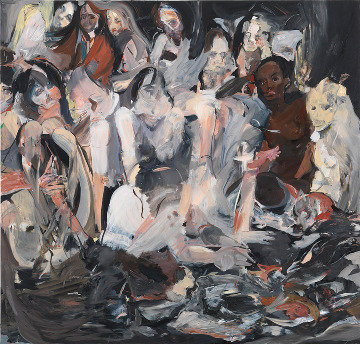 Gagosian Gallery is pleased to present recent paintings by Cecily Brown, her first solo exhibition in New York since 2008.

Brown’s most recent paintings treat the subject of the nude ensemble, revealing an attitude that draws equivocally from the genre of history painting and pop culture. By freeing her subjects and inspirations from their original contexts, Brown subverts the role of narrative in the construction of genre and points to the slippage inherent in quoting from source. In her visible grapple with formal concerns, she crowds each canvas with stylistically diverse anonymous figures—some loosely suggested, others identifiably expressive—who fulfill her explicit aim of conveying figurative imagery in a just-elusive shorthand, as directly and vigorously as possible.

In fleshy yet chromatically sober paintings, such as a monumentally scaled untitled work of 2012, clusters of diverse and individuated nudes crowd the scene, glaring and grimacing, as if from some unnamed purgatory. At the base of the painting, the odd limb is visible, the body to which it belongs buried beneath the confrontational energies of the group. Fragmented figures and faces, reduced to complexions or expressions, dissolve into kaleidoscopic concentrations of grey, purple, and sienna with a sudden accent of electric teal or orange. Eyelashes, teeth, hair, the curve of a breast or a shoulder blade may stand out from contrasting brushwork, or separate into momentary tonal distillations amidst the compositional chaos. Brimming with the intensity of human presence, these paintings play out Brown's persistent fascination with the tension between bold painterly gesture and figurative content.

This is a story of a man/child who chose to develop his five senses and live and experience rather than just read.
—Dennis Hopper

Gagosian Gallery is pleased to present photographs from The Lost Album of the late Dennis Hopper. This historically significant body of work from the 1960s has not been exhibited in the United States since 1970.

Hopper established his reputation as a cult director with Easy Rider (1969), while maintaining his reputation as an edgy character actor with gritty performances in The American Friend (1977), Apocalypse Now (1979), Blue Velvet (1986), and Hoosiers (1986). Before his rise to Hollywood stardom, he captured the establishment-busting spirit of the 1960s in photographs that travel from Los Angeles to Harlem to Tijuana, and which portray iconic figures including Tina Turner, Andy Warhol, and Martin Luther King, Jr. The Lost Album in its entirety comprises over 400 black and white photographs taken between 1961—when his first wife Brooke Hayward gave him a Nikon camera for his birthday—and 1967. He would not make photographs again until the early 1980s.

Hopper’s photographs, shot with a Nikon camera and a 28-millimeter lens, are uncropped and produced with available light. His preference for full-frame added to his candid approach, producing such poignant images as Beverly Renee on Bed, where the model's intentional but awkward pose is underscored by the nonchalance of the setting, from the unmade bed to the dark upper reaches of the image. This and other photographs of women reveal more intimate, playful and voyeuristic aspects of Hopper's gaze. In one of many photographs that he took of Hayward, she peers coquettishly from behind cat's-eye sunglasses, wearing a crown with the price tag attached.

Hopper followed Martin Luther King, Jr. during the Selma-to-Montgomery marches of 1965, capturing the fervor of the national quest for civil rights, from King speaking into a cluster of microphones before a spellbound audience to young black men holding aloft American flags, embodying the hope that the stars and stripes would come to represent a nation of equals under the law. These images, together with the many other cultural events, iconic individuals, and intimate moments that caught Hopper’s attention, constitute a panoramic view of the sixties that combines political idealism and humanistic optimism with California cool.

For further information please contact the gallery at newyork@gagosian.com or at +1.212.744.2313.