The exhibition "Afterimage" brings together 18 works by Mat Collishaw dating from the '90s to the present and a new video installation which will be premiered at Arter. "Don't Forget to Remember" is conceived as a large installation consisting of seven new pieces by Volkan Aslan alluding to personal and social reflexes and sentiments about the days of the week. 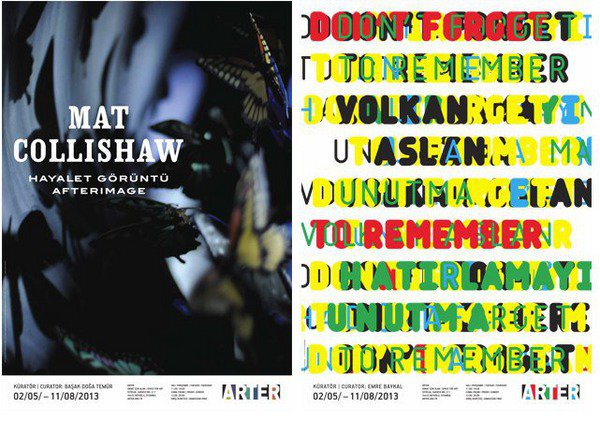 ARTER is hosting Mat Collishaw's first solo exhibition in Istanbul between 2 May and 11 August 2013. Titled Afterimage, the exhibition is curated by Başak Doğa Temür and brings together 18 works dating from the '90s to the present. It also features a new video installation funded by the Vehbi Koç Foundation, which the artist has produced exclusively for this exhibition and will be premiered at ARTER.

Mat Collishaw has been exploring the darker side of human nature by using the power of images in his artistic production, which spans a period of over 20 years. In his photographs, oil paintings, sculptures and installations, he delicately brings together pain and beauty, loss and light, decay and innocence. Inspired by the potential for emotional manipulation inherent in the image, Collishaw's work employs beautiful, inviting and seductive images in order to tackle concepts such as despair, disease and evil.

Afterimage presents a selection of Collishaw's works that form the myriad intersections of media, material and conceptual themes: his photographs, sculptures and installations that use light, surface and projection in unconventional ways. The exhibition takes its title from a term used to describe a specific optical illusion, whereby an image continues to exist even after the stimulation. In this sense, Afterimage could be thought of as a key concept in understanding Collishaw's visual approach and works.

Mat Collishaw often uses real images of disaster and suffering, or staged images related to these, producing attractive, fascinating and even hypnotic works that draw us in. Whether directly using documentary images as in the works Kristallnacht (2002), Barbarossa (2002/2013) and Suicide Suite (1993/2013), or a staged image based on a background event as in Burnt Almonds (2000) or Last Meal on Death Row (2010), Collishaw's work often leaves us experiencing contradictory feelings in the face of universal issues.

Prize Crop, the video installation produced for the exhibition at ARTER, is a 3D animation where he sets in motion photojournalist Kevin Carter's iconic Pulitzer Prize-winning 1993 photograph titled Famine in Sudan.

Collishaw also borrows various elements of nature in his work: butterflies, birds, savage dogs or flowers. The Venal Muse (2012) is a work that pays homage to Charles Baudelaire's Les Fleurs du Mal and features diseased or wounded flowers made of artificial resin, sprouting out of lead-coloured soil. On close inspection their fine petals have a flesh-like appearance, with anthropomorphic scars and sores pitting the skin. They are reflections on the depraved state of modern, media-saturated culture or spectres of genetic manipulation.

ARTER will be hosting Volkan Aslan's exhibition, titled Don’t Forget to Remember, from 2 May to 11 August 2013. Curated by Emre Baykal, this solo exhibition is conceived as a large installation consisting of seven new pieces alluding to personal and social reflexes and sentiments about the days of the week.

Don’t Forget to Remember reflects on the concept of time. Volkan Aslan infuses the days of the week with his personal rhythm and sense of time by inserting several other everyday patterns into the template known as ‘the week.’ Although the titles of the works have been borrowed from a fixed and repetitive pattern of time that progresses in a straight line, Aslan is interested in a subjective perception of time, within which this linear flow is interrupted through the act of ‘remembering’ and ‘forgetting.’ Here, the past and the future are transposed and brought into the present moment. As our weekly calendars thrust us collectively forward, the ‘days’ in Don’t Forget To Remember draw Aslan back towards the past, and towards the impressions that occupy his personal memory.

The works Volkan Aslan has produced for Don’t Forget To Remember subject his main strategy of instrumentalising templates and readymade objects—a method he frequently employs—to experimentation on a new template. As he uses the days of the week as the backbone of the exhibition, Aslan connects each day to his own personal experiences and perceptions by associating them with various readymade objects and patterns.

Designed by Esen Karol and edited by İlkay Baliç, the book of the exhibition brings together the photographs which Volkan Aslan took almost every day as a diary starting on the New Year’s Day 2013 and ending on 3 April—his birthday—alongside quotes from his notebooks and from a conversation on ‘the days of the week’ made during the production process of the book.