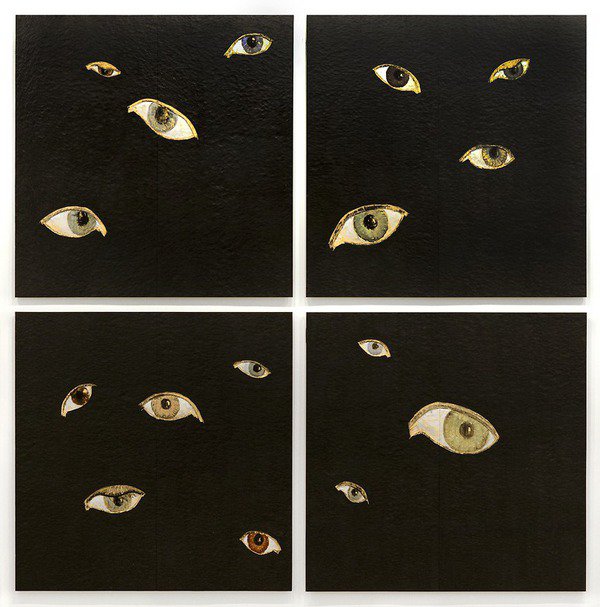 Galerie Thaddaeus Ropac Salzburg presents a solo exhibition by the German sculptor Stephan Balkenhol (b 1957 in Fritzlar, Hessen) in the exhibition venue HALLE.

The exhibition combines three groups of works: 1. the installation Universe (2008), which consists of monumental, free-standing reliefs, first shown in 2008/09, in Balkenhol's major retrospective in the Hamburg Deichtorhallen; 2. the wall sculptures from Balkenhol's widely discussed exhibition in the Church of St. Elisabeth in Kassel, shown parallel to documenta 13 (2012); 3. new sculptures.

During his studies with Ulrich Rückriem at the Hamburg Academy of Fine Arts (1976-82), Stephan Balkenhol had already decided on figurative work. In view of the conceptual strictness and minimalism of his teacher's works, and the dominance of abstract trends in sculpture in the 1960s and '70s, this was by no means a matter of course. His first coloured wood sculptures, created in 1982 and 1983, evinced a typical Balkenhol style which continued to develop over the ensuing years, gradually expanding to include a growing body of themes. An archaic, expressive treatment of the wood is combined with the representation of human, animal or fantastic figures, either frozen in unpretentious poses or involved in everyday, emotionless interaction. Despite precise coordination of the proportions, the wood remains as roughly split, carved material. The creatures depicted are either over- or undersized – never their natural size. This method of alienation creates an interesting field of tension: while from a human angle the figures seem very close, they are spatially detached and far removed from reality. In addition, Balkenhol's figures are not associated with any particular milieu, and are not to be regarded under social aspects. Their content is open and neutral, and they convey no other message apart from that of their own presence. On the one hand, with his commitment to banality and playfulness Balkenhol demonstrates an affinity with Pop Art, and with his insistence on autonomy and self-referentiality a kinship with Minimal Art. On the other hand, in his endeavour to liberate sculpture from political, religious or allegorical implications, he stands in the tradition of sculptors such as Aristide Maillol, Georg Kolbe or Wilhelm Lehmbruck.

Balkenhol says: "I don't want garrulous, overly expressive figures. So I look for an open kind of expression which will allow any state of mind or situation."

In a conversation held in 2011 about the Faustian element in Balkenhol's works, Thomas Oberender remarked: "The indeterminacy, the waiving of any effort at narration inherent in these totally passive figures of Balkenhol's is basically not quite so indeterminate – for a start, they are young. Then they are emphatically so undefined that they can stand for almost anything; in their white shirts and black trousers, in their simple clothes, these people could equally well come from town or country, they could be rich or poor sad or contented. They ... look. They are poised very precisely in that state of repose that makes them somehow universally familiar. In their attitude, too, they are subtly unpredictable because they are occupied with nothing but waiting, looking into the distance whence they came and whither they are going, apparently without wish or intention. Balkenhol's reliefs, moreover, look at us actively; his women stare back at us, discreetly, but from the depths of the wooden panel. Usually quite amiably. I think this indeterminacy that we find so attractive is achieved by most precise calculation. In addition, Balkenhol's realism is always close to Minimalism, to Concept Art – the material remains in evidence, the working visible; the mimetic quality of his sculptures emerges from a block or a trunk that does not obliterate the traces of his working, but makes it an integral part of his sculptures. Some of his women have no ears to hear with – their existence is always fixed within art, far less real than the images would suggest. What I mean is that his sculptures are thoroughly artificial."

Stephan Balkenhol lives and works in Meisenthal (Alsace), Karlsruhe and Berlin. His works are to be seen in the collections of major international museums of contemporary art, and have been presented worldwide in institutional solo exhibitions since the 1980s. His most recent comprehensive solo exhibitions have included the Musée de Grenoble (2010), Deichtorhallen, Hamburg (2008/09), Staatliche Kunsthalle, Baden-Baden, Museum Küppersmühle, Duisburg, Museum der Moderne, Salzburg (2006/07), National Museum of Art, Osaka (2005) and Sprengel Museum, Hanover (2003).

His highest sculpture to date – the 6m-high cedar-wood male torso Sempre più, probably one of the artist's most impressive sculptures in public space – stood in the Forum Caesaris in Rome in 2009 and 2010.

To mark Richard Wagner's 200th birthday, the City of Leipzig has dedicated a new sculpture to the composer. Stephan Balkenhol's competition design was selected; the painted bronze sculpture representing a young Wagner with a huge shadow towering over him is to be unveiled on 22 May 2013.