Wall drawings #343a - #343b - #343c - #343g and works on paper. Wall Drawings are made up of straight lines, arcs and broken lines; later, geometrical figures appear. Thanks to LeWitt's instructions, the work can be reproduced by an assistant trained in his technique, through the auspices of the LeWitt Estate, thus perpetuating the artist's intentions. 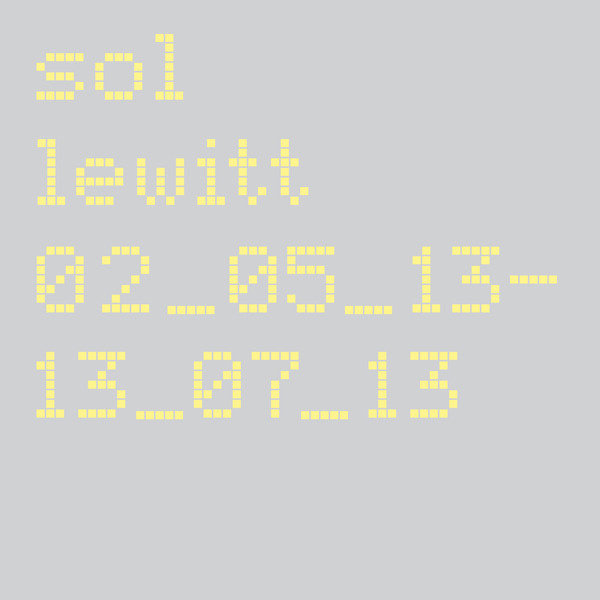 At the heart of the exhibition are four Wall Drawings: #343a, #343b, #343c and #343g. Their first installation at the Gagosian Gallery in Venice, California, goes back to 1980, the date at which Sol LeWitt conceived a series of nine geometrical figures. The four Wall Drawings were exhibited in 1994 at 14/16 Verneuil, Paris. They will be accompanied in Geneva by several works on paper from the 1990s. The visitor will therefore have the opportunity to gain a unique experience of LeWitt's work.

The first Wall Drawing by LeWitt was made for the Paula Cooper Gallery in New York on October 1968. Wall Drawings are made up of straight lines, arcs and broken lines; later, geometrical figures appear.
LeWitt chooses a wall as the support for his work in order to avoid any illusionism. Each drawing is therefore ephemeral and can be seen only for the duration of an exhibition. Its permanence is, however, ensured by a title and a succinct definition given by Sol LeWitt. Thus one of the Wall Drawings in the exhibition is defined by the artist in these words: 'On a black wall, the triangle within a square, the background is filled in solid white.' At first glance, the work produced by this definition seems to be a simple black triangle on a white background. But the Wall Drawing is in fact the white background, made up of many lines according to the instructions of the artist.

Thanks to LeWitt's instructions, the work can be reproduced by an assistant trained in his technique, through the auspices of the LeWitt Estate, thus perpetuating the artist's intentions. By bringing other hands than his own into the execution of the work, LeWitt renews the practice of the fresco painters of the Renaissance. Every Wall Drawing therefore remains distinct and unique and corresponds to the place where it is executed.

For Sol LeWitt, the material result is secondary to the initial concept. Ideas can thus be works of art in their own right and exist independent of their material execution. LeWitt declared in his Paragraphs on Conceptual Art (1967):

'I will refer to the kind of art in which I am involved as conceptual art. In conceptual art the idea or the concept is the most important aspect of the work. When an artist uses a conceptual form of art, it means that all of the planning and decisions are made beforehand and the execution is a perfunctory affair. The idea is a machine that makes art.'

The works of Sol LeWitt can be found in the most important collections from MoMA in New York to the Centre Pompidou in Paris. He is considered a founding representative of Minimalism and conceptual art. Wall Drawings constitute a major part of LeWitt's oeuvre: a retrospective of the Wall Drawings, initiated by the artist himself, began in 2008 (for the extraordinary duration of 25 years) at the Massachusetts Museum of Contemporary Art, North Adams. The four Wall Drawings exhibited in Geneva have been selected for this retrospective.