Recent Paintings. The exhibition comprises eight new oil paintings and a painting-installation made by the artist in 2012 and 2013. 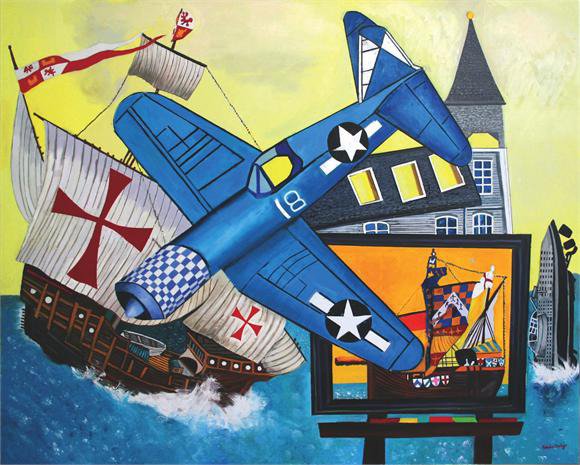 It is with great pleasure that Xavier Hufkens announces a new exhibition by Malcolm Morley. It comprises eight new oil paintings and a painting- installation made by the artist in 2012 and 2013.

Morley’s mastery of colour and composition come to the fore in this exhibition. His painting technique, which he has always referred to as ‘Superrealism’, revolves around the exquisite rendering of details. Each of his chosen images, which are drawn from found or remembered source material, is subdivided into a grid of small squares that are transferred to the canvas one by one. This method enables the artist to achieve an extraordinary pictorial intensity. Dynamic images fragment into mosaics of small abstract paintings, in which there is no longer a distinction between background and foreground. Upon close inspection, each square centimetre of Morley’s paintings is nothing less than a small masterpiece. Says Morley: “The subject of all these paintings is the painting of them.” In these recent works, Morley combines his signature subjects – ships and old airplanes, advertising images, the Second World War, England, and British and American history – with the epic themes of discoveries (of Bermuda, a British overseas territory, and America) and disasters (most notably shipwrecks). Corsair and Santa Maria (2011), for example, combines the image of a Corsair fighter aircraft (a type that saw service in World War II and the Korean War) with one of La Santa Maria, the largest of the three ships sailed by Columbus on his first voyage to the New World – and which was shipwrecked on Christmas Day, 1492.

Bermuda, which features in several works in the exhibition, was colonised as the result of a shipwreck. In 1609, British Admiral Sir George Somers steered his ship to safety there during a ferocious storm. The island’s past resurfaces in Balloons Over Hamilton (2012), which depicts a scene in the capital of Bermuda. The work shows the historic Sessions House (built in 1817), the interior layout of which is identical to the Houses of Parliament in London, and a boat painted with the letters ‘SISL’, is a reference to Somers Isles Shipping Ltd (a modern-day Bermudian freight shipping company named after Admiral Somers).

Literature, which has long been a source of inspiration to Morley, inspired the painting The Island of the Day Before (2012). The title is identical to that of a book by Umberto Eco. The protagonist of the novel is the seventeenth century Italian nobleman – and sole survivor of a shipwreck – Roberto della Griva. The story, however, is narrated from the point of view of the modern editor who is attempting to organise della Griva’s papers. In the book, past and the present are interlaced, and time and space dissolve, just as they do in Morley’s paintings.

Morley, who grew up in the midst of World War II, and is an avid reader of historical books about the period, has vivid memories of the Blitz that destroyed his childhood home. The war is a recurrent theme in his oeuvre and the artist returns to it once more in the striking painting-installation entitled The Spitfire (2012). The work takes its name from Morley’s hand-painted, double-sided pub ‘sign’ that hangs perpendicular to a large painting of the ‘Spitfire pub’ itself. Morley is particularly interested in the fact that when viewers stand in front of the pub sign, it is reduced to a black line and seems to disappear. He also had a friend shoot through the ‘sign’ with a gun. Other typically British elements include the painted cut out of a naval officer and the bulldog with the British flag, which refer to the Royal Navy and Winston Churchill. Juxtaposed with these is the image of the young Palestinian man jumping over the wall. This figure derives from an earlier painting, Wall Jumpers (2002), the source of which was a media image showing Palestinians scrambling over the separation barrier built by Israel in the occupied territories. The Spitfire is a world in which the personal and public collide.

Malcolm Morley was born in London in 1931. He studied at the Camberwell School of Arts and Crafts and the Royal College of Art. Since his first show in New York in 1957, he has had countless exhibitions in Europe and North America and has taken part in international exhibitions, including Documenta 5 and 6. His first retrospective in Whitechapel Gallery earned Morley the honour of being the first to receive the Turner Prize for British artists (1984). Recent solo exhibition include: Malcolm Morley: Paper and Process, Parrish Museum of Art, Southampton, New York (2012-13), Malcolm Morley in a NutShell: The Fine Art of Painting 1954- 2012, Yale School of Art, New Haven, Connecticut (2012) and Malcolm Morley, the Hayward Gallery, London (2001). Malcolm Morley has been exhibiting with Xavier Hufkens since 2000. He lives in New York.