Anatol Echo. The focus of Bitzer's current work (paintings, sculptures, drawings) is on the resonance of familiar sounds and the perpetuation of past images. These works are brought together in a comprehensive installation. 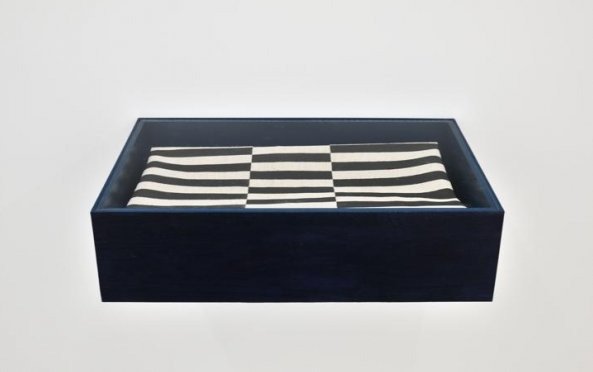 An echo is created when the resonances of a sound wave are slowed down to such an extent that their vibration is perceptible as a distinct acoustic occurrence. Thus the nymph Echo from Greek mythology, unhappy in her love for Narcissus, was condemned to repeat forever the last words she hears.

The focus of Matthias Bitzer’s current work (paintings, sculptures, drawings) is on the resonance of familiar sounds and the perpetuation of past images. These works are brought together in a comprehensive installation that fills the new Parisian space of the Almine Rech Gallery. It is therefore as a sign of his renunciation of the primacy of linear temporality that one must read the poetic citation chosen by the artist: ‘You reflect everything and your reflection is in everything’. The interrelatedness of the past and present, the fresh illumination of a moment one believed to be already lost bring to mind Walter Benjamin’s notion of ‘now-time’.[1] The multiplicity of these facets is reflected in Bitzer’s Phosphor Notes, a wall installation that evokes picture atlases as much as illustrated diaries. Even after repeated viewings, these individual pieces retain their enigmatic character and only sporadically reveal the isolated traces of their seeming ly heterogeneous origins. Matthias Bitzer’s interest for the questions of authenticity and construction of reality, his exploration of the structures of configuration of a plural personality and masked identity networks are represented by Anatol, the protagonist of the one-act play of the same name by Arthur Schnitzler published in 1893 and a figure which appears as paradigmatic in this exhibition.[2] This Viennese dandy goes through various hopeless love affairs in the melancholy atmosphere of the fin-de-siècle and despairs of ever finding a constant love, an absolute truth. The kaleidoscopic fragmentation of his ego, triggered by the intoxication of illusion, circles indefatigably around these same ideas. The lamentation of Goethe’s Faust that ‘Two souls live, alas, in my breast’ traverses his artistic work like a leitmotif.[3]

In our attempt to escape from the whirlpool of life with its multitude of role models and expectations, one generally succeeds in getting closer to one’s own self by passing through striking intersections, memorable biographical segments and not least a constant reflection of one’s fluctuating self. Motionlessness is an illusion. The perpetual to-and-fro between the outermost points of elapsing time repeats itself cyclically – the rotation of the Earth proves it: everything is in movement.