"A Universal Archive: William Kentridge as Printmaker" include 100 prints in all media dating from 1988 to the present, ranging in scale from intimate etchings and drypoints to linocuts measuring 2.5 metres high. With a stress on experimental and serial works, this exhibition will highlight Kentridge's distinctive use of light and shadow and silhouettes, his concern with memory and perspective, and his absorption in literary texts. 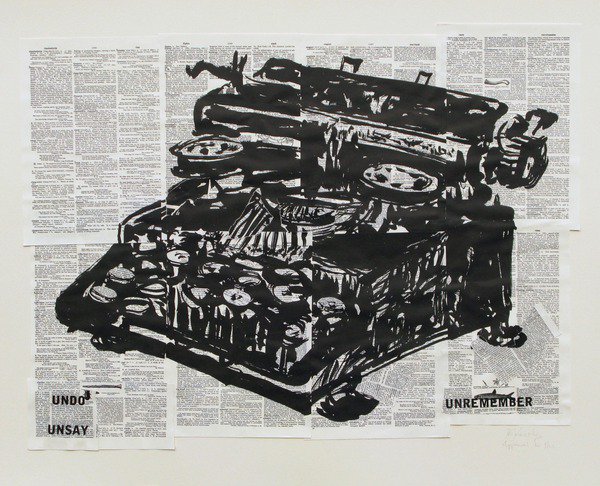 A Universal Archive: William Kentridge as Printmaker, a Hayward Touring exhibition opening at QUAD in Derby, will be the first UK exhibition to focus solely on the internationally renowned South African artist’s prints. This major exhibition will include 100 prints in all media dating from 1988 to the present, ranging in scale from intimate etchings and drypoints to linocuts measuring 2.5 metres high. New works from Kentridge’s ongoing series Universal Archive, including Cat Assemblage (2012) and 12 Coffee Pots (2012), will be shown in Britain for the first time. With a stress on experimental and serial works, this exhibition will highlight Kentridge’s distinctive use of light and shadow and silhouettes, his concern with memory and perspective, and his absorption in literary texts.

Highlights of the exhibition include Art in a State of Hope and Art in a State of Siege (both 1988) early silkscreens which mark Kentridge’s transition from designing posters for political protests and theatre productions into fine art printmaking; Living Language (1999), a series of experimental drypoint prints on vinyl 33rpm LPs; Telephone Lady and Walking Man (both 2000), two surreal life-sized figures in linocut; Portage (2000), an accordion-folded book spanning 4 metres, with silhouetted figures collaged onto pages of the French encyclopedia Le Nouveau Larousse Illustré.; Nose (2007-2010), a series of thirty small–scale prints inspired by the Russian novelist Nikolai Gogol’s story ‘The Nose’.

Acclaimed for his animated films, drawings, theatre and opera productions, Kentridge studied etching at the Johannesburg Art Foundation, and printmaking has remained central to his practice ever since. In the past two and a half decades he has produced more than 400 prints, including etchings, engravings, aquatints, silkscreens, linocuts and lithographs; often experimenting with challenging formats and a combination of techniques.

A Universal Archive: William Kentridge as Printmaker, a Hayward Touring exhibition from Southbank Centre opens at QUAD on 15 June and runs until 18 August 2013

The exhibition will be part of QUAD’s season of ‘Memory’, which includes exhibition events and a film season. The exhibition is free to visit. For more information please go to: www.derbyquad.co.uk/exhibition/universal-archive-william-kentridge-printmaker

QUAD is Derby’s centre for art and film, on the Market Place in Derby city centre. QUAD is a gallery, cinema, café bar and workshop that anyone can use. QUAD is a partnership between Derby City Council, Arts Council England, EM Media, European Union, East Midlands Development Agency, Derby and Derbyshire Economic Partnership, Derby City Partnership and Derby Cityscape.

This exhibition coincides with an exceptionally productive period in the artist’s career. ‘William Kentridge: Five Themes’ opened at the San Francisco Museum of Modern Art in 2009 and has shown at major museums worldwide including the Museum of Modern Art, New York, galleries in Paris, Vienna, Jerusalem and Moscow, and most recently at the Australian Centre for the Moving Image, Melbourne in 2012. His production of Mozart’s The Magic Flute at La Scala in Milan and his presentation of Shostakovich’s The Nose at New York’s Metropolitan Opera in Spring 2010, were widely praised. In 2012, William Kentridge gave the Norton Lectures at Harvard and presented a new multimedia video installation The Refusal of Time in Documenta 13, Kassel, Germany. In addition, his work I am not me, the horse is not mine was recently on show in the Tanks, Tate Modern in Winter 2012-13.

A Universal Archive: William Kentridge as Printmaker was organised with the generous cooperation of David Krut, in whose Johannesburg print studio William Kentridge has produced many of his prints, and the artist’s studio.

Hayward Touring produces exhibitions that tour to galleries, museums and other publicly-funded venues throughout Britain. Hayward Touring collaborate with artists, independent curators, writers and partner institutions to develop and tour imaginative exhibitions that are seen by approximately half a million people in over 100 cities and towns each year. Hayward Touring also extends to smaller monographic print, photography or new media exhibitions touring to a variety of venues, including galleries, libraries, universities, colleges and schools, arts centres and historic sites. Current and recent exhibitions include The Universal Addressability of Dumb Things curated by Mark Leckey, Curiosity: Art and the Pleasures of Knowing, and George Grosz: The Big NO.