The City as Artwork. In presenting concrete, focused aspects of how a city is imagined, the exhibition goes beyond the notion of artificiality to achieve revealing views of Amsterdam in its multiple complexities. Works by Thomas Hirschhorn, Barbara Visser, Lawrence Weiner... 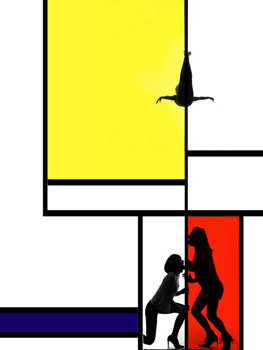 The dynamic of cities is causing dramatic changes in society and culture worldwide. Cities are experiencing vast demographic, economic, social and cultural shocks that they are not prepared to assume. Amsterdam is the opposite example of a city where regulations seek to keep not only an urban coherence and scale but to prevent the city from disappearing into the waters.

The term "artificial" pops up frequently when referring to Amsterdam. It does not only allude to the physical character of a city "stolen" to the sea, but to a general feeling about the city's life, its culture, its submission to tourism, its paradoxical ruled liberality...a place where everything is under control, a postcard city.

The well-known cultural critic Armando Silva has brought attention to how cities are perceived the same way as artworks are, that is, as the result of a subjective relationship, beyond their material, social and cultural patterns. He has researched the psychology of urban imaginaries, the "imaginary sketches" by which the city is recognized by the people, who symbolically construct the urban image.

Is Amsterdam an artificial city? Or do these apparently ordered façades conceal a completely different Amsterdam—one which is far from as well-regulated? How does this city function as a source of inspiration for artists? Various artists who have resided in the city and have special bonds with it have responded to these questions in the framework of this exhibition curated by Gerardo Mosquera in collaboration with Rieke Vos. In presenting concrete, focused aspects of how a city is imagined, the exhibition will go beyond the notion of artificiality to achieve revealing views of Amsterdam in its multiple complexities.

Similar to the participants in the exhibition A'dam & Eve: On sex, tolerance and other dependencies (2002, de Appel arts centre), who tackled the outsider's view of Amsterdam as a sexually liberated, open and fun, free wheelin' society, the artists in Artifical Amsterdam explore the multiple faces of the Dutch capital. Among the pieces being presented in this exhibition are idiosyncratic films about Amsterdam by Lawrence Weiner (US) and Ed van der Elsken (NL), new works by artists like James Becket (SA/NL), Egle Budvytyte & Bart Groenendaal (LT/NL) and Hans op de Beeck (BE), a monumental mural by Jan Rothuizen (NL) and a 'map' of his famous Spinoza Monument by Thomas Hirschhorn. In her work, Cristina Lucas (SP) connects Mondriaan with the erotic. Fernando Sánchez Castillo (SP) realizes an ironic ode to the 1970s riots around the neighbouring Nieuwmarkt square. And in the autumn the Japanese artist Tatzu Nishi presents a spectacular project in our partner institution, the Oude Kerk.

Side programme
A diverse range of activities are being organized in connection with the exhibition: an interview with the curators and artists, evening walking tours of the Wallen in cooperation with the Oude Kerk, performances in the city centre and educational workshops