Artworks that question the repercussions of the system on artistic production and attitudes with an often self-deprecating and humorous approach. 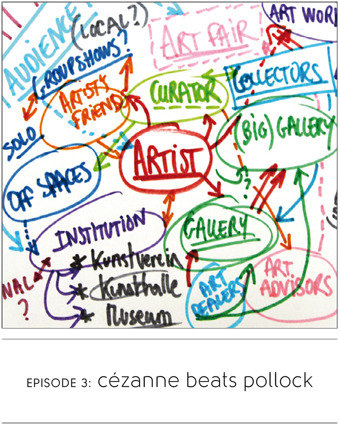 In parallel to Berlin's’ big autumn art events: abc Berlin and the Berlin Art Week, insitu presents »Episode 3: Cézanne beats Pollock« a group show that reflects and discusses mechanisms of the art market as well as the art system itself. An artist's professional ascension is ruled by numerous, often very hierarchical steps. Besides the studio work and the artistic content itself, an artist is confronted more and more with various concerns. These concerns can include networking, recognition in the media, plus the accumulation of shows and public appearances, all of which lead to forms of “starification” in the art world. Invented by Hollywood, implanted into the art field by Andy Warhol, and widely applied since the 2009 TV show “School of Saatchi” (which looked for the next upcoming artist star), this strongly competitive system within art induces an often ambivalent situation in which artists find themselves trying to produce independent and authentic artworks while being dependent on and influenced by the rules of gallerists, curators, and collectors. Therefore, reflections on the pressure to succeed, financial security or the sustainability of art pieces are often embedded into the content of art production itself.

»Episode 3: Cézanne beats Pollock« assembles artworks that question the repercussions of this system on artistic production and attitudes with an often self-deprecating and humorous approach.