The exhibition features 62 recent works by eight international artists who are redefining photography as a medium of experimentation and intellectual inquiry. Their porous practices - grounded in photographic books, mass media, photomontage, music, film, and science - mark a shift in the understanding of "what a picture could be". 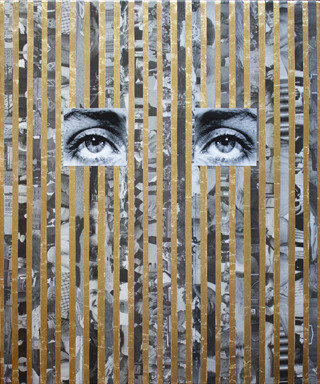 The exhibition is organized by Roxana Marcoci, Curator; with Katerina Stathopoulou, Curatorial Assistant, Department of Photography, The Museum of Modern Art.

The Museum of Modern Art’s 28th annual New Photography exhibition, held from September 14, 2013, through January 6, 2014, features 62 recent works by eight international artists who are redefining photography as a medium of experimentation and intellectual inquiry. Their porous practices—grounded in photographic books, mass media, photomontage, music, film, and science—mark a shift in the understanding of “what a picture could be.” The artists selected for this year’s exhibition are Adam Broomberg and Oliver Chanarin, Brendan Fowler, Annette Kelm, Lisa Oppenheim, Anna Ostoya, Josephine Pryde, and Eileen Quinlan. In its expanded discursive field, photography’s relationship to other artistic disciplines is yet unmapped. This expanded understanding of photography leads to images that document, invent, interpret, and invite sustained transformations of their subject.

“Underscoring the idea that there has never been just one type of photography,” Roxana Marcoci says, “the artists in this exhibition explore reversals between abstraction and representation, documentary and conceptual processes, the uniquely handmade and the mechanically reproducible, analogue and digital techniques. They turn pictures back into questions, creatively reassessing the meaning of image-making today.”

Adam Broomberg (South African, b. 1970) and Oliver Chanarin (British, b. 1971) contribute War Primer 2 (2011), an artist’s book that physically inhabits the pages of the 1998 first English-language edition of Bertolt Brecht’s War Primer (originally published in German in 1955). In his book, Brecht matched World War II newspaper clippings with four-line poems that he called photo-epigrams, in an effort to demystify mass-media images. Brecht was skeptical of the role photojournalism played within the political economy of capitalism, and he referred to press pictures as hieroglyphics in need of decoding. In their version, Broomberg and Chanarin have silkscreened text directly onto Brecht’s book and superimposed low-resolution screen-grabs of images from the “War on Terror” culled from the Internet. Through this layering of photographic history, the artists have constructed their own critique of imagery as it relates to contemporary conflict.

Brendan Fowler (American, b. 1978) is a musician who has been practicing as a visual artist since 2008. In his signature works, Fowler overlaps up to four framed pictures by literally crashing one through another, mixing photography, sculpture, and performance. In a large-scale work specifically conceived for this exhibition, Winter 2012–Fall 2012 (Joel and Sean and Carol and Chadwick installing at Untitled 3, "Miles'" Security Jacket, Andrea told the people at Cafe Gratitude that it was Maxwell's birthday when it wasn't, Andrea's Cousin's Cousin's House on Easter, Ry showing new UNTITLED logo, Photographic Arts Center, Coronado Ter. Screen Door, Proofing ANPQ 16 with Casey, What Wendy Saw) (2013), Fowler reveals both the fronts and backs of several photographs’ frames, stacked and screwed together. His three-dimensional pictures combine snapshots of personal friends, arrangements of flowers, the artist’s studio, mirrors, and screens in restructured autobiographical narratives. Known as BARR on the rock/DIY (“do-it- yourself”) underground music circuit, Fowler's background is in free-jazz percussion.

Annette Kelm (German, b. 1975) taps a variety of artistic, historical, and cross-cultural references by conflating several genres into single works or into series on a single motif. Kelm is interested in typologies; in models of mass production; in stylistic developments of patterned textiles, design, and technology; and in issues related to the function of objects and the nature of their representation. Taken with large and medium-format analog cameras, and individually printed by hand, her pictures are carefully composed, similar to advertisements. Yet, this sense of precise objectivity is undercut by artifice and strangeness. Kelm turns out baffling narratives, as in Untitled (Cardboard, Paisley, Ladder, Hands) (2013), in which the concealed photographic setup unexpectedly crops up within the picture frame.

Lisa Oppenheim (American, b. 1975) produces experimental films and photograms that use special techniques to create unique images. In the Smoke series (2012) and other related works, she searches Flickr for images by using generic keywords or phrases, such as “volcano,” “industrial pollution,” or “bombing attacks,” in order to find and download images of fire in natural or industrial disasters. She then outputs these images onto digital negatives, focusing on selected segments from the original pictures. Instead of using the light of an enlarger to expose the negatives, she uses firelight, and then develops the exposed paper (or film) in solarol to create a solarized effect, reversing lights and darks. The schism between the optical expressiveness of pictures and the scientism of captions (which are long, descriptive, and include the date and location of the event) suggests that one’s understanding of the world is partial, that photography can only re-present the world, and that the documentary genre itself is ultimately fraught with uncertainty.

In her conceptual practice—which incorporates photomontage, painting, and writing—Anna Ostoya (Polish, b. 1978) revisits the histories of lesser-known avant-garde movements in East- Central Europe, paralleled with their renowned Western counterparts. Using a “pseudomorphic” method, she pairs visually similar subjects into compelling new images. In Female Pseudomorphisms (2010), she highlights the critical role women have played in 20th-century culture by matching two film icons, French actress Brigitte Bardot with Polish movie star Kalina Jedrusik. In Mixed Pseudomorphism of True/False Cry (2010), she juxtaposes a 1931 picture by Germaine Krull of model Wanda Hubbell in tears with a still from Bas Jan Ader’s 1970 silent film I’m too sad to tell you. And in Anamorphic Visual Pseudomorphism (2010), she uses images from censored films, such as Luis Buñuel’s 1929 Un Chien andalou and David Wojnarowicz’s 1988 Untitled (Desire). Ostoya questions the photographic image as a purveyor of memory and symbol of modern culture, and opens up history to uncharted narrative paths.

In her series of photographs It’s Not My Body (2011), Josephine Pryde (British, b. 1967) references both the history of darkroom experiments and contemporary medical imaging techniques. In this series, she superimposes low-resolution MRI scans of a human embryo and its mother against desert landscapes shot through tinted filters. Pryde explores questions regarding the reproduction of images and the impact visuals have on political debates surrounding issues of “personhood” and a woman’s right to choose. In Scale (2012), Pryde presents a series of guinea pig portraits that simultaneously allude to pets in faux-stock photography and rodents in laboratory research. Pryde deploys props—ribbons, strings, Mylar, and words—to instill personality in the pets’ deadpan expressions, but also plays with photographic conventions, manipulating the snapshots through close-ups, double exposures, and camera shifts in focal length.

Eileen Quinlan’s (American, b. 1972) forays into abstract photography are grounded in feminist history and material culture. In Sophia (2012), Quinlan photographs a yoga mat—an emblem of social wellbeing and contemporary lifestyle—that has been tackled, scrunched, and draped directly to the wall. The work’s title, however, refers to the proper name of one of the 39 women in Judy Chicago’s installation The Dinner Party (1979). In Laura (2012), named after the fictional character of Laura Palmer in David Lynch’s 1990s Twin Peaks television series, Quinlan experiments with an expired black-and-white film that yields both a Polaroid and a viable negative. The film, however, failed to fully develop, creating an accidental double-pinnacle form at the top of the picture, which Quinlan scanned and colorized digitally.

PUBLIC PROGRAM:
Brendan Fowler. And Martin. 2013. 30-min. performance And Martin, a performance piece by Brenden Fowler created for MoMA, takes place on Monday, September 16, at 4:30 p.m. in The Donald B. and Catherine C. Marron Atrium. And Martin is a radical update of BARR, the performance/band for which the artist first became known in the early 2000s. Taking the prior project's deconstruction of the pop singer as a starting point, this new performance mines a wider field of both the stand-up show and the TED Talk.
The performance program is organized by Roxana Marcoci, Curator; with Katerina Stathopoulou, Curatorial Assistant, Department of Photography, The Museum of Modern Art.

The exhibition is accompanied by a website featuring original audio content, including interviews with select artists from the exhibition.