Recent Photography and Video from Israel. The work of established and emerging artists, who are emotionally and intellectually invested in their country's fate, gives voice to their sense of unease and threat, reveal, interpret, and question, if complicated love, Israel's politics, culture, and future. 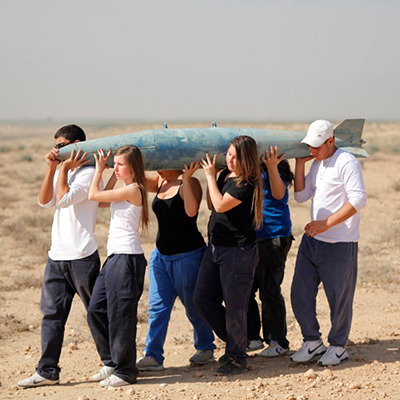 When it comes to the subject of Israel, nothing is simple; not its history, geography, politics, peoples, or multicultural and religious core. The points of view are as varied and passionate as the people who populate this land that is the site of conflict, ancient and recent, and promise. A new exhibition, The Compromised Land: Recent Photography and Video from Israel, organized by the Neuberger Museum of Art of Purchase College, confronts many of Israel's issues head on. Organized around themes of coexistence and conflict, history and memory, and the importance of land, the work of twenty-one contemporary artists will be on view from August 11 through December 1, 2013.

The Compromised Land revolves around the notion of land, which, in Israel, is regarded as a sacred as well as a geographical, economic, social, and political organism, rooted in the psyche and culture of its peoples, and thousands of years of history. The work of established and emerging artists, who are emotionally and intellectually invested in their country's fate, gives voice to their sense of unease and threat, as they consider, reveal, interpret, and question, often with an abiding, if complicated love, Israel's politics, culture, and future. The exhibition also examines Israeli photography and video, practices that dominate contemporary Israeli art and for which Israel is internationally recognized.

The exhibition is curated by Helaine Posner, Senior Curator of Contemporary Art, and guest curator Lilly Wei, and is accompanied by a fully illustrated 96-page catalogue with essays by Ory Dessau; Ron Pundak, Israeli historian and chairman of the Israeli Peace NGO Forum; and the co-curators.

According to Ms. Posner and Ms. Wei, "The Compromised Land brings together a selection of works that underscore the shift from the utopian goals of the first generation of Israelis to the escalating complications and disillusionments expressed by present generations, as they grapple with a host of issues through the lens of the political, the nationalistic, the militaristic, the social, the religious, and the personal."

Neu Words: Artists and Curators in Conversation
Wednesday, September 25, 6:30pm
One's relationship with the land is a central theme in The Compromised Land. Artists Dana Levy and Gilad Ratman express this theme through their work, but their engagement manifests in very different ways. Exhibition's co-curators Helaine Posner and Lilly Wei join Levy and Ratman in a lively conversation.

Yaseen Lecture Series
Endowed by Helen and Leonard Yaseen, this biennial Lecture Series was established in 1974 for scholars and artists to discuss their work and address contemporary ideas and issues. It has featured noted speakers, including Claes Oldenburg, Maya Angelou, and Chuck Close. This year's speakers and dates will be confirmed shortly. Please check www.neuberger.org and reserve your free ticket by calling 914 251 6125. Held at the Performing Arts Center.

Sunday, September 22, 2pm
Gannit Ankori, scholar of Israeli and Palestinian art and professor at Brandeis University, will address the exhibition's themes and works of art.

Tuesday, October 8, 6pm
Artist Oded Hirsch discusses the tension between the individual and the community, and the role it plays in his work.

Thursday, October 24, 6pm
Gilad Ratman shares his inspirations and process for creating works such as The Boggy Man (2008), included in this exhibition. Ratman represents Israel at this year's Venice Biennale.