Go Back. Paintings, Posters and Drawings 1980 - 2013. With just a few gestures, simple brushstrokes and a limited selection of everyday objects, the artist told his story. The exhibition comprises more than 100 of the artist's works. 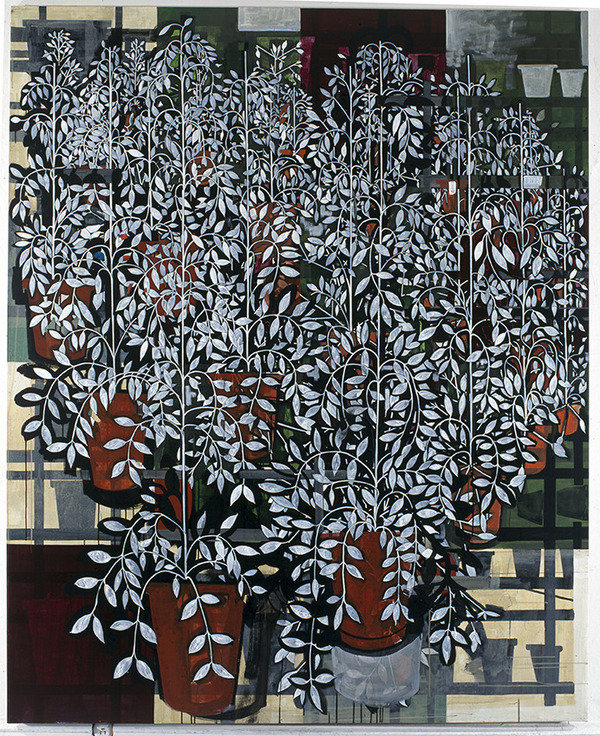 Jesper Christiansen is one of the low-key giants within Danish painting. While the young “wild ones” raged in the 1980s, Christiansen began to explore paintings as a sign language. With just a few gestures, simple brushstrokes and a limited selection of everyday objects, the artist told his story. And Christiansen has since then, in painting after painting, lifted the quiet life of a Danish residential street to the level of a grand style presented on richly coloured canvases in which words, images, signs and motifs all find their place among each other.

With the large-scale exhibition, entitled Go Back, Brandts celebrates Jesper Christiansen as one of the most significant names in Danish art today. The exhibition comprises more than 100 of the artist’s paintings and works on paper, ranging from the earliest to the most recent. The work introducing the exhibition is an impressive painting in a gigantic format, executed directly on a wall at Brandts. The rest of the exhibition unfolds as an architecture of spaces where as a guest you can easily lose yourself in an infinity of details, possibilities, traces and narratives.

Jesper Christiansen, born in 1955, works and lives in Copenhagen. His paintings are represented at a great many museums in Scandinavia, and he has carried out a series of public decoration assignments in Denmark, including a large mural in the Crown Prince and Crown Princess’s Palace at Amalienborg in 2010. With his original approach to painting, Jesper Christiansen has influenced new generations of artists as professor at the Royal Danish Academy of Fine Arts from 2003 to 2008. In 2009 he was awarded the Danish Arts Foundation’s lifelong grant for an extraordinary artistic achievement.

The exhibition is organized in collaboration with the Holstebro Kunstmuseum, where it will later be shown.

Brandts will be publishing a richly illustrated book on Jesper Christiansen. The book will feature texts by Henrik Wivel, Lisbeth Bonde, and the artist himself. It will be available at Brandts Museum Shop from around 15 November.

We thank the Danish Arts Council, the Oticon Foundation, the Beckett Foundation and the Augustinus Foundation.