Accelerated Buddha. the Fondation juxtaposes Sugimoto's artworks with antique masterpieces from his personnal collection. The works include an art video of the thousand Bodhisattva of Sanjusangendo - a 13th century temple in Kyoto - will be presented. A process of accelerated photographs makes us see the thousand Buddhas becoming a million. 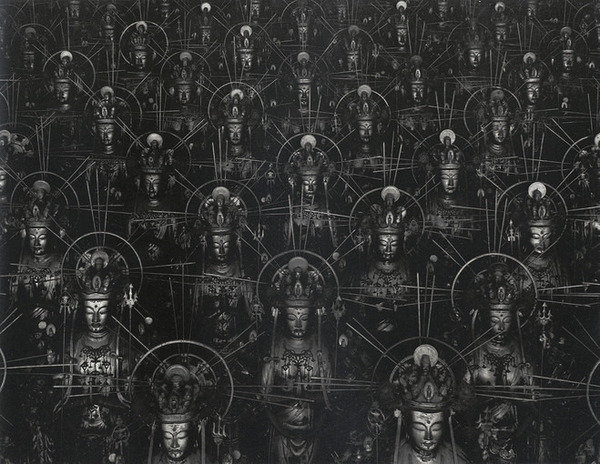 On the occasion of its 20th exhibition, the Fondation Pierre Bergé – Yves Saint Laurent gives a carte blanche to Japanese artist, Hiroshi Sugimoto. For Accelerated Buddha, the Fondation juxtaposes Sugimoto's artworks with antique masterpieces from his personnal collection.

The works include an art video of the thousand Bodhisattva of Sanjûsangendo — a 13th century temple in Kyoto — will be presented. A process of accelerated photographs makes us see the thousand Buddhas becoming a million.

Hiroshi Sugimoto is a major figure in contemporary photography who pioneered the use of very long exposure times. His work explores time and man's relationship with reality.

Civilisations rise, spread, and die out. The glories that were Egypt and Greece, Celtic Europe and the Inca Empire all vanished, leaving but evocative traces whose spirit was carried forward in part by successive civilisations. People originally co-existed with their gods. People are thought to have turned from animals into humans with the emergence of consciousness some five million years ago. Consciousness brought a heightened awareness of time and with it special ceremonies for mourning the dead. Death was omnipresent, or rather death was thought to be a constant universal state and life only an exceptional transition. The gods existed at the fringes of life and death, and people spent their brief lifespans preparing for the journey into eternal death. Nobles commissioned gigantic tombs for themselves and offered living sacrifices to the gods. Then sometime during Neolithic Age, as the dawn of conceptual thought overtook the sentient obscurity, the gods were now envisioned as manifesting themselves throughout the natural world — in fire, in water, in stone, in trees, in wolves, in foxes, in the sun and moon. Perhaps as early as five thousand years ago, humanity reached the age of civilisation. People domesticated animals, raised plants and irrigated fields. Amidst growing self-realisation, they stored and transmitted their knowledge in writing. History was born.

People became arrogant in their self-confidence. The myriad Neolithic gods and spirits gradually transformed and fused into humanised deities. People sought out the most spiritually gifted and bestowed upon them godlike stature. They abandoned the worship of graven images and idolised special people instead. The holy men of Buddhism, Christianity and Islam were elevated to ever greater heights, which led to bloody sectarian fighting in the name of religion. Buddhism grew out the Vedic beliefs of India some two thousand five hundred years ago as preached by Gautama Siddhârtha, the Sage of Sâkya Clan who became known as the Buddha or “Enlightened One”. He taught that the world was full of suffering and that both life and death repeated an endless cycle of reincarnation, yet we might aspire to escape this wheel of suffering by striving toward enlightenment. Buddhism later faded away in India, but split into different schools elsewhere in Asia, the orthodox Theravâda sects remaining to the south, while the more interpretive Mahâyâna teachings crossed the Himalayas into China and flourished in Chang-an. By the early sixth century, Buddhism had reached Japan, where it was established in the seventh century as the national religion to protect the state built around the imperial lineage. This exhibition features a video rendering of a thousand Bodhisattva statues enshrined in the thirteenth century temple Rengeô-in, better known as Sanjûsangendô, in k yôto.

In five minutes, you will see forty-eight separate photos of the thousand statues gradually accelerate and multiply into a million figures. Rengeô-in was built by the retired Emperor Go-shirakawa as a visionary model of Amida Buddha’s Pure Land Paradise, accelerated here until it dissipates. Displayed alongside the video, various Buddhist relics and treasures also provide an overview of Buddhist thinking throughout the ages. As every civilisation speeds toward destruction — and our present civilisation is no exception to the rule — it should be obvious to anyone that mass reproduction and economic growth cannot continue forever. w e can easily see ourselves in these r eplicating Buddha figures, accelerating toward oblivion. Humankind now approaches the realm of enlightenment, beyond the cycle of life and death.

Fondation Pierre Berge' Yves Saint Laurent
3 rue Léonce Reynaud, 75116 Paris
Open from Tuesday to Sunday, except public holidays from 11 am to 6 pm (last entry at 5.30 P.M.)
Full price 7€ Reduced price 5€ for students, people under 25 and seniors
Free for children under 10 and job-seekers