How Values Changed Making 1789-2013. Left-wing political values such as collectivism, equality and the search for alternative economies have continuously influenced the making of art and visual culture. This group show examines this relation from the French Revolution to the present day. "Palle Nielsen: The Model" is the most comprehensive display of archival material from Danish artist Palle Nielsen. 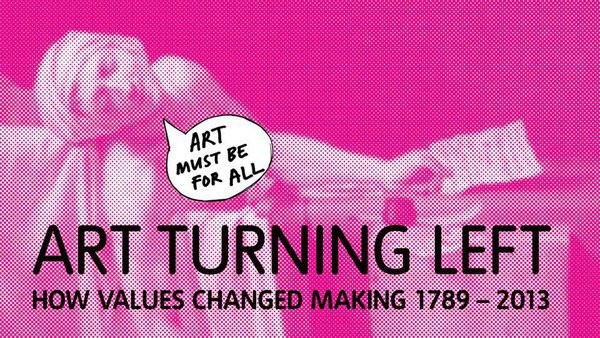 Palle Nielsen: The Model is the most comprehensive display of archival material from Danish artist Palle Nielsen’s (born 1942) groundbreaking social experiment The Model – A Model for a Qualitative Society 1968. The display includes sound recordings, documents and photographs from the original project.

The Model – A Model for a Qualitative Society transformed the Moderna Museet, Stockholm, into an adventure playground. Over the course of three weeks in October 1968 The Model saw more than 20,000 children make use of the jungle gyms, climbing ropes, water chute, foam rubber ‘diving pool’, theatrical costumes, carnival masks, LPs and turntables, swings, and many other elements that comprised the playscape. The project remains one of the most ambitious museum interventions to date, yet is still a relatively unknown episode in art history.

Nielsen’s 1968 experiment at the Moderna Museet was a large scale production of one of the playground ‘actions’ that Nielsen and the activist group Aktion Samtal (Action Dialogue) produced in and around Stockholm both before and after The Model. These ‘actions’ often took the form of constructing playgrounds in public spaces in order to aid the development of new social structures. The Model utilised the institutional space of the museum in order to raise the profile of Action Dialogue and bring their ideas to a larger audience. Palle Nielsen: The Model will include press and television coverage of the original installation.

The Model 1968 was developed at a time when the idea of childhood and the rights of children were political issues and the debate surrounding nature vs. nurture was at the fore of sociological study. Tate Liverpool’s archival reconstruction of the project aims to capture its original political motives, its conceptual complexities, and its roots in the activist networks of Sweden and Denmark.

Palle Nielsen’s The Model addressed the role of play in the museum, emphasising the importance of the process of children’s freedom and creativity. Visit Art Dock on the 1st Floor with your families to explore, share, learn and play together and also design your own environments. Come back to the exhibition during the weekend of 18–19 January 2014 and see how your ideas have been made into an interactive installation for everyone to enjoy.

Palle Nielsen: The Model is programmed in parallel with Art Turning Left: How Values Changed Making 1789–2013, the first exhibition to examine how the production and reception of art has been influenced by left-wing values, from the French Revolution to the present day. Palle Nielsen: The Model focuses on artistic production, interaction and participation, and visitors can explore these themes further in Art Turning Left.

Art Turning Left is the first exhibition to examine how the production and reception of art has been influenced by left-wing values, from the French Revolution to the present day.

Left-wing political values such as collectivism, equality and the search for alternative economies have continuously influenced the making of art and visual culture, from the way in which William Morris organised his production line to the deliberate anonymity of the designers of the Atelier Populaire posters in Paris 1968. The direct involvement of visual artists in politics and the social and ethical values of left-wing politics can be traced to the French Revolution, when artists such as Jacques-Louis David granted permission for their artwork to be reproduced to support the Republican cause. Versions of David’s iconic image of The Death of Marat 1793–4, one of the most famous images of the Revolution is an exhibition highlight.

Art Turning Left is a thematic exhibition, based on key concerns that span different historical periods and geographic locations. They range from equality in production and collective authorship to the question of how to merge art and life. The exhibition moves away from the political messages behind the works and claims about the ability of art to deliver political and social change, and instead focuses on the effect political values have had on the processes, aesthetics and display of artworks.

Programmed in parallel with Art Turning Left, Tate Liverpool also presents a display of archival material from Palle Nielsen’s social experiment The Model – A Model for a Qualitative Society 1968. The Danish artist converted the Moderna Museet in Stockholm into an adventure playground in order to observe children and present viewers with the opportunity to visualise a more equal society. Our display Palle Nielsen: The Model is the most comprehensive collection of material from the project including sound, documents and photographs.