Comprising sculptures, objects and interventions, the exhibition of Andreas Slominski forms a complex reference system between art, the institution, the topographical context and the historical figure Brecht. Based on the traditions of modernism in Brazil, the artists of the show "Conversation Pieces" develop their own post-conceptual approaches. 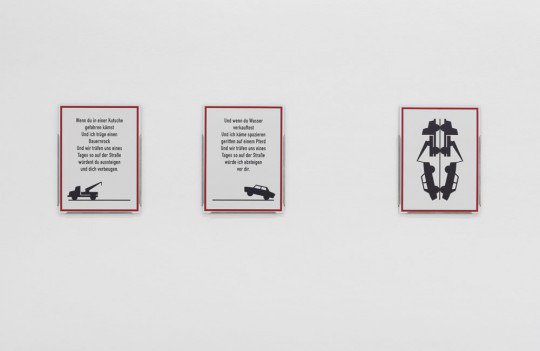 By being awarded the Hannah-Höch-Preis 2013 by the State of Berlin, Andreas Slominski is honored for his extensive work. Slominski became internationally known with his traps, which—effectively being placed in the exhibition space—are expanding the concept of sculpture. His conceptual works reflect social, historical and economic coherences and explore social conditions and conventions.

The exhibition of Andreas Slominski takes place at Neuer Berliner Kunstverein and at the Brecht Weigel memorial rooms, as well as on the sidewalk along the walls of the Französischer and Dorotheenstädtischer cemetery.

Comprising sculptures, objects and interventions, the exhibition project forms a complex reference system between art, the institution, the topographical context and the historical figure Brecht. Andreas Slominski developed several groups of works, connecting both the exhibition venues and the cemeteries, topographically located in between, in an overall ensemble. As a reference to the automobile lover Brecht, the artist installed several towing signs on the sidewalk between Neuer Berliner Kunstverein, at the gates of Französischer and Dorotheenstädtischer cemetery, up to the garage in the courtyard of the Brecht Weigel memorial rooms. Where there were signs missing, they were added. Brecht’s former bedroom is located directly above his garage, in which once his ENW convertible was parked. Again, at Neuer Berliner Kunstverein, Slominski exhibits a sculptural ensemble made of two galvanized flat roof garages, inside of which exhibits from the Brecht memorial rooms can be seen, including personal items and a showcase with the eponymous Brecht poem Die Freunde (The Friends). Furthermore, a piece of stonework made of stones specially imported from China was built at Neuer Berliner Kunstverein—an allusion both to Brecht’s affinity for Chinese culture as well as to the tombs of the neighboring Dorotheenstädtischer cemetery, where Brecht is buried. The admission ticket to both venues represents a two-part object—one each at each venue—which the visitors are welcome to take home as a work of art after visiting the exhibition.

Publication
A catalog accompanying the exhibition is published by Verlag der Buchhandlung Walther König Cologne, with a foreword by Marius Babias and texts by Durs Grünbein, Dietmar Rübel and Harald Welzer.

Thursday, 23 January 2014, 6pm
"Das Gesicht der Dinge" (The Face of Things): a movie night
Lecture by Dietmar Rübel (Professor of History and Theory of Arts at the Dresden Academy of Fine Arts), followed by a visit of the Brecht-Weigel memorial rooms at the Brecht House.

Based on the traditions of modernism in Brazil, the artists of the exhibition Conversation Pieces develop their own post-conceptual approaches. In their works they draw a differentiated picture of the society in Brazil today. An international generation of artists have their say, showing, beyond Euro-centric notions of Latin America, how the current changes in politics, economy and culture can be artistically explored and analyzed. Videos, installations, objects and photography are drawing a line from the Portuguese colonial era in the 16th Century to the urban liberation movements in the 19th and 20th Century, up to the 2016 Olympic Games as a major international event.

**Special edition of the magazine on the theory and practice of art Arte e Ensaios of the UFRJ | Universidade Federal do Rio de Janeiro (degree course Fine Arts) in cooperation with the Berlin-Weissensee School of Art (degree course Space Strategies) as part of the Germany Year (scientific pillar) in Brazil 2013–2014.