The Quiet Rooms. The exhibition explores the usually ignored aspects of daily life the artist has never stopped questioning. 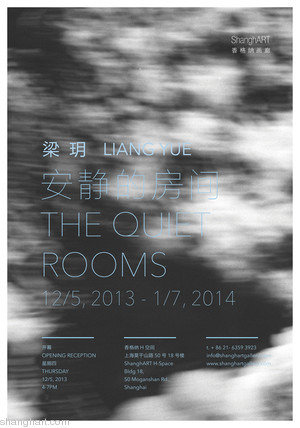 On 5 December 2013, LIANG Yue will present her second solo exhibition The Quiet Rooms at ShanghART H-Space. Since her first exhibition at ShanghART back in 2003, the artist has been developing her visual language in the past ten years mostly through photography, video as well as video installation. LIANG Yue explores the usually ignored aspects of daily life and has never stopped questioning.

Her images are highly experimental and subversive, revealing an extraordinary tenacity and dedication. Whether it is through photography or video, LIANG Yue contemplates seemingly boring everydayness, scenes of so-called meaningless triviality and eternal natural sceneries which is often deemed worthless. Yet, it is exactly those neglected that are continuously captured by her lens, recorded and tracked down, and appear ultimately in a very philosophical affirmation. In the last fifteen years of her career, LIANG Yue constantly simplifies and refines her artistic creation by, for instance, reduction of movement of the lens, less video editing and even using only one shot in video with sound eliminated.

This approach causes a kind of final purification which renders her artworks almost meditative. In this solo exhibition, the audience can follow the artist into her creation of The Quiet Rooms, where one can forget the hustling and bustling of the city and get its share of tranquility. This kind of experience ensures the viewers likewise to follow the artist’s recent examination on life, to ponder on the ordinary, which is ignored yet so lively in its quiet way, and to question the so-called meaning and value of artistic creation.