The exhibition examines wide-ranging artistic interpretations that have redefined the wall as a visual support and space-defining element since the 1960s. Works - by artists such as Daniel Buren, Gunther Forg, Sarah Morris, Matt Mullican and Rosemarie Trockel - are presented in dialogue with other works from the Nationalgalerie's collection. 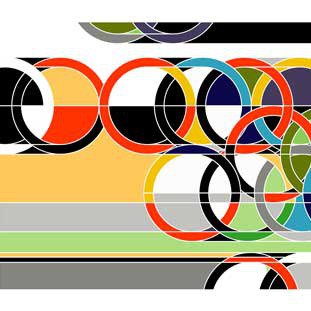 The exhibition “Wall Works” examines wide-ranging artistic interpretations that have redefined the wall as a visual support and space-defining element since the 1960s. The starting point was an extensive and diverse group of wall paintings and wall objects from the Edition Schellmann, recently acquired for the museum collection by the Verein der Freunde der Nationalgalerie, which is now being presented in an initial selection of works. The acquisition of the entire group was largely made possible due to generous cooperation on the part of the Edition Schellmann, for whom the works were conceived and created as architecturally-related “Wall Works” from 1992–2009. These works, which are created in very diverse techniques, are based on site-specific designs by artists working within the context of varied artistic positions and tendencies – including Minimal and Conceptual Art, Arte Povera, video art, or related to postmodern practices. Wall works – by artists such as Daniel Buren, Günther Förg, Sarah Morris, Matt Mullican and Rosemarie Trockel – are presented in the exhibition in dialogue with other works from the Nationalgalerie’s collection (the Friedrich Christian Flick Collection at Hamburger Bahnhof, the Marx Collection and the Marzona Collection), as well as with selected loans and new wall works created especially for the exhibition by Friederike Feldmann, Katharina Grosse and Nasan Tur.

Against the historical background of mural paintings and wall designs dating back over millennia, artists in the early 20th century – like Piet Mondrian, Theo van Doesburg, Oskar Schlemmer, El Lissitzky and Vladimir Tatlin – devised concepts for wall paintings, picture walls and wall reliefs, which went beyond the frame of an individual image in order to take an entire wall or interior space into view. The boundaries of painting and sculpture have been further advanced through their connection to this notion since the 1960s, while also questioning the conditions under which art is produced, how it presents itself, and how it’s reviewed and traded. From within the context of Minimalism and Conceptual art artists examined the “White Cube” in a museum or gallery space, and the wall, as part of the exhibition display, was taken up as a central theme. In differing ways, walls serve as temporary surfaces for staging graphic, painterly, cinematic and language-based works, and they can, in fact, be interpreted as sculpture. Walls are sometimes also physically attacked or the masonry beneath the plaster is exposed. In essence, the wall, pictorial space and architectural space combine to create an entity in every work, each in its own way.

The exhibition presents the diversity of artistic approaches towards the wall, focusing on central works by renowned artists as examples.
Moreover, each of the five sections of the exhibition addresses a different series of questions. Nevertheless, a walk through the exhibition will repeatedly point out cross-currents and overlap between the individual subject areas.

In Hall 1 and Hall U2 the main emphasis is on Minimalist and conceptual positions, in which the spectrum of works spans from the 1960s to the present.
Hall 2 and the subsequent small galleries are concerned with the juxtaposition of painting and drawing on the classical visual supports of canvas and paper and large-scale wall works, which are transferred directly onto the walls in the form of silkscreen prints, wallpaper, and pencil drawings or by means of stencil techniques.
At the junction between Hall 3 and Hall 4, as well as in Hall U3, emphasis is placed on signs, symbol systems and messages –notations, which manifest themselves in the urban space – that have been taken up as such and further developed by artists.

Relationships between objects and the wall are the focus in Hall 4, and these relationships are presented as wall objects or dialogues to wall paintings, in which their effects unfold through interplay with the objects. The relationship between the body and the wall is the central theme in Hall 5, addressed by several of Bruce Nauman’s works, as well as a current work by Antonio Paucar realized on site.

A publication on the exhibition, documenting the presentation in the Rieckhallen, with texts (Ger./Eng.) by Gabriele Knapstein and Uta Caspary, et al., will be published in spring 2014.

Artists’ talks, to be announced separately, will take place in the exhibition beginning in February 2014.