The exhibition begins with that which we are all familiar with from art and the products of mass culture. Within art, animation is a common effect used to evoke life and vitality, in particular through movement, although it is also present when art works appear to return the gaze of the viewer. 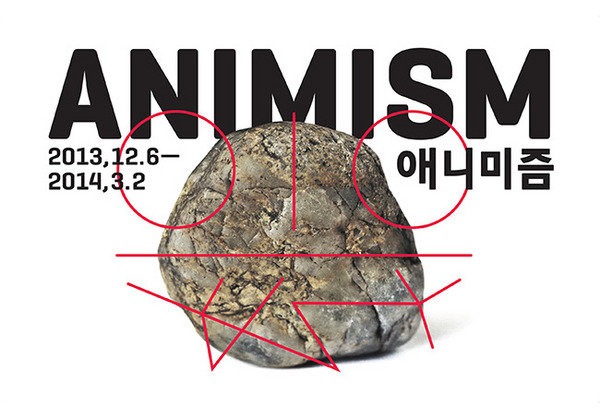 From December 6 to March 2, 2014, the Ilmin Museum of Art (Director, Kim Taeryeong) will be hosting Animism, an exhibition that brings together a diverse body of work by international artists from the early twentieth century together with the museum’s own research archive. The show includes over 50 pieces by a total of 37 artists and teams from around the world whose work inspires the humanistic imagination to to re-examine today’s modern condition through the concept of animism.
Animism, the belief that objects possess souls or agency, has been largely excluded or ignored by the rationality and reason that represent modern society; however, it is deeply embedded in our lives even today. This exhibition brings into focus the phenomena and discourse surrounding the concept of animism and suggests the possibility of a new narrative told from its perspective. The show offers works of art and archival materials dealing with a variety of subjects including nature and artifice; the construction of logic; systems of intelligence; and shamanism and faith. It seeks to re-examines the hidden side of the world of animism and provides an opportunity for reflecting on our contemporary condition.
Animism tries to break away from simply looking at animism as non-modern or non-Western; it goes beyond the restrictive conception of animism as the attribution of souls to inanimate objects to look at works of art, documentaries, and intellectual activities that encompass the understanding, expression, imagination, and discourse concerning this concept. To the extent that animism had been classified as pre-modern and primitive in the process of forming the modern rational agent, this exhibition’s curator Anselm Franke takes an alternative, self-aware approach to the subject. He views animism as a tool for delineating the boundaries of the “West” and a device for establishing a divide between the modernized West and the colonized other. The show additionally considers resistance to the destruction of indigenous culture in today’s society and a new politics based on an animistic worldview.
In the exhibition, Candida Höfer, a German photographer who creates work based on typological photographs, presents a series of works that deal with the laboratory and the museum. Also included are early twentieth-century experimental films by Len Lye, who has gone down in the history of visual culture as a pioneer of experimental film; and the 1929 The Skeleton Dance, a piece directed by father of animation Walt Disney. In his new work Parallel (2012) the most important living German film director and media artist, Harun Farocki, shows computer-generated landscapes and real landscapes side-by-side, referencing the boundaries between organisms, nature, and the virtual. A large-scale painting by Adam Avikainen fills one wall of the second floor exhibition hall; the artist created the piece during his three-month stay in South Korea.
Animism also features several works by Korean artists, including photographs by Park Chan-gyong, who works on the subject of the rise and fall of indigenous shamanistic faith after modernization; Jeju Prayer, (2012) by visual artist and film director Heungsoon Im; Under the Vein (2012), a video work by Donghee Koo; Sangdon Kim’s Mirror (2009), which shows the primal, wild nature and indigenousness in inverted Korean landscapes; and Chosil Kil’s The Breathtaking (2012), which consists of a glass bottle imbued with the breath of a shaman and focuses on the unseen energy in art and incantations. Also included are photographic works by Hosang Park and Dongyeop Lee that had been shown in two Ilmin Visual Culture publication series, The Investigation of Things and See, Show and the Windows, and other works chosen during research. Other archival materials were selected from the Museum of Humanities and the Dong-A Ilbo archives.

About the Curator
Anselm Franke is a Head of Visual Arts at the Haus der Kulturen der Welt in Berlin. He recently curated the exhibition and publication project Animism in various collaborations and chapters shown in Antwerpen, Bern, Vienna, Berlin and New York between 2010-12. He was director of Extra City Kunsthal Antwerpen (2006-2010) where he organized exhibitions such as Sergei Eisenstein – The Mexican Drawings and Mimetismé, and he was a co-curator of Manifesta 7 (2008), the 1st Brussels Biennial (2008-2009), and the Taipei Biennial (2012). He is a researcher at Goldsmiths College University of London and a lecturer at the Hochschule für Gestaltung Karlsruhe. Since 2006, he is co-curator of the Forum Expanded of the International Filmfestival Berlin.

ANIMISM: THE EXHIBITION AND ITS CONCEPTS
by Anselm Franke

The exhibition Animism begins with that which we are all familiar with from art and the products of mass culture—the cartoon for example—as animation. Within art, animation is a common effect used to evoke life and vitality, in particular through movement, although it is also present when art works—sculptures or specific pictures—appear to return the gaze of the viewer. However, what we accept as an effect in art is a subject of historical contention beyond its confines. What do we perceive as being alive? When we ask this question outside the field of art it invariably raises questions which call on us to provide further distinctions for the purpose of clarification. The mere effect of vitality is not to be equated with independent life, this appears beyond doubt. But where is the dividing line? What possesses a soul, life, and the power to act? That the border between animate and inanimate matter, or between pure subjects and mere objects, is in no sense a natural given is demonstrated by the simple fact that in different cultures this border is perceived and conceived of in highly different ways. Consequently, there can never be an ultimately “objective” designation of the “correct” division. However, the dividing line is not a “purely” subjective matter either—after all, it is just as important for the organization of our material relations to nature as for the question of the social and political status of living beings in a specific society. Is it possible to examine this dividing line itself, together with the organizing knowledge systems and practices? The project Animism proceeds from the premise that imaginary demarcations symptomatically reflect cultures, that representations, aesthetic processes and media images consolidate, reflect and transgress these dividing lines. Consequently, the exhibition explores how this border is reflected in aesthetic subjectification and objectification processes, and attempts to situate these aesthetic processes in the concrete socio-political contexts of colonial modernity.

The most radical antitype to the modern Western world view (whose dualistic conception is built on a categorical separation of subject and object) is to be found in animism. Animism is applied to those world views in which there is seemingly no division between nature and culture, in which objects, nature, or the entire cosmos, are perceived of as being alive, and thus quasi subjectified. At the end of the 19th century, at the zenith of colonialism and the belief in scientific progress, the modern world view attempted to find self-confirmation in its image of the pre-modern other. Animism became the exemplary manifestation of this idea of the other. Animism is an antitype to the “disenchanted,” objectified, reified world of modernity. From the modern perspective, it stands for a world of magic transformations in which the borders are supposedly misconceived, or—in a romantic-utopian turn—overcome.

As real as animistic cultures are on the one hand—around 40 percent of the world’s population today have so-called “animistic beliefs”—they proved hard to explain for the tradition of Western modernity. If we start from the basic assumptions as to what constitutes “nature” and “culture,” “subject” and “object” that underwrite modern knowledge and its scientific disciplines, then it appears that we have no other option than to characterize animism as a “faith” or “mere belief”, which fails to grasp the objective reality of things, explaining it in the last instance as a “psychological mechanism.” Animists, for modern knowledge, were people who failed to arrive at “objective knowledge”, becomes they “erroneously” confused their inner psychological reality with the facts of the outer world. And this view seemed to be supported in the eyes of the modern voices by the fact that animist cultures are far less busy in conquering their environments by means of technology. But the modern view of animism is a projection throughout: It measures what animist people say about reality not as reality, but only through the lens of unquestioned assumptions on which their own knowledge is built, for instance, the assumption that the world “out there” basically consists of indifferent, inanimate matter that follows only material laws.

We have taken animism as our theme precisely because it represents a real limit to the conception of Western modernity, a provocation to the modern principle of reality which has become deeply inscribed in perception and the order of knowledge in our division of scientific disciplines in the modern academy. At best animistic practices are recognized under the category of “culture,” but only as long as they don’t raise any claims to making statements about the actual character of the cosmos and the world.

Consequently Animism is not an exhibition about animism which exhibits ethnographic objects in display cases which other cultures claim to be animate in one or another way. The Western-modern idea of animism as the pre-modern other that falsely believes in the ensoulment of objects which are in fact inanimate is itself a symptomatic expression of this modernity’s basic assumptions. In contrast, the intention is to view the term and the idea inscribed within it as a mirror which can be used to examine these basic assumptions at the root of Western modernity, and thus recognize them as the product of demarcations, of actual border-making practices, technologies and mythologies. The project Animism raises the necessity of a revision and decolonization of the modern imagination of which it the concept is an expression and symptom.

“DISORIENTATION: the animate image in contemporary Southeast Asia” by David Teh David Teh (Prof. of National University of Singapore, Director of Future Perfect) Dec. 13. 2013, 4 pm.

“The Ghosts Wandering the Age of Empires” by Suki Kim  Kim Suki (Curator and Publisher of Hyunsil Books)
January 15, 2014, 4 pm.