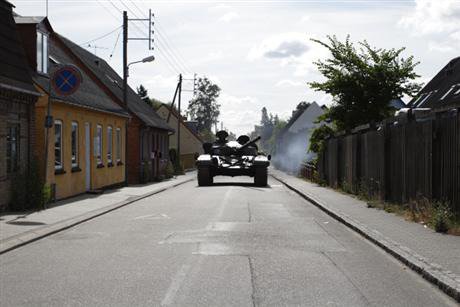 Köken Ergun’s video works focus on rituals of distinct social groups and subcultures. He has extensively researched and followed Turkish weddings in Germany, the Ashura commemorations of Caferis in İstanbul, beauty pageants organized by Philippine immigrant workers in Israel, and military ceremonies that take place on Turkey’s official holidays, to reveal through his work the formation of common identities and performative representations.

Ergun’s interests lie in the interactions and dynamics of social conclaves. Rather than having a documentarist attitude, Ergun’s curiosity helps him offer an unexpected and lighthearted analysis of rituals within religion, societal conventions and protocols of traditionally prepared entertainment. He produces genuine investigations of these activities, by taking into account the views of diasporas, differences, nationalism, and secularism. Ergun’s personal today and the attitude of the original 1930s ceremonial aesthetics. TANKLOVE (2008) takes place in the small town of Jyderup in Denmark. A tank rolls over the streets, as if it has popped out of a film set, its dramatic appearance questioning human response to military intervention on everyday life in a context where its impact is normally unencountered.

Binibining Promised Land (2009-2010) is about the beauty pageants organized by Philippine immigrant workers in Israel. The work displays more than a beauty pageant, by revealing work conditions, issues of immigration and the cultural codes that arise in those situations.

Crowds and Power opens on the last day of 19th Festival on Wheels investment in his subjects invites them into his practice and results in long radiating relationships.
The exhibition borrows its title from Elias Canetti’s book Masse und Macht [Crowds and Power]. Ergun questions the negative impact of authoritarian power on individuals and crowds with wit, to reveal awry mechanisms within the structures of our society.

In Untitled (2004), an early work about body politics, we watch Ergun as he covers his head. His confident movements gradually break down as he battles with conflicting positions regarding the contemporary body under stress.

I, Soldier (2005) deals with militarism and nationalism, as played out in the celebrations of May 19, Youth and Sports Day, in Turkey. The Flag (2006), which won a prize at the Rotterdam Film Festival, was shot at the April 23, National Sovereignty and Children’s Day celebrations. These works address similarities between the compulsory convocations of organized by Ankara Cinema Association with the support of the Turkish Ministry of Culture and Tourism.

Köken Ergun is a video artist based in İstanbul and Berlin. His works have been exhibited in international institutions such as Platform Garanti, Palais de Tokyo, Stedelijk Museum Bureau Amsterdam, KIASMA Museum of Contemporary Arts, Digital ArtLab, Casino Luxembourg, Heidelberger Kunstverein and Kunsthalle Winterthur, as well as in the film festivals of Oberhausen, Berlin, Rotterdam, Sydney and Zagreb. Ergun received an award at the Rotterdam Film Festival in 2007 for his work The Flag (2006) and another at the 63rd Berlinale Film Festival in 2013 for his work Ashura (2012).