The group exhibition focuses on how the media, politics and the advertising industry are instrumental in the manipulation of awareness of 'free choice' and problematizes the role of the sense of sight in these manipulation processes, from physical, social and mental aspects. In her latest work, Erel enhances the idea of space that is present at the foundation of her paintings and focuses on her own personal history through the spaces she has lived in. 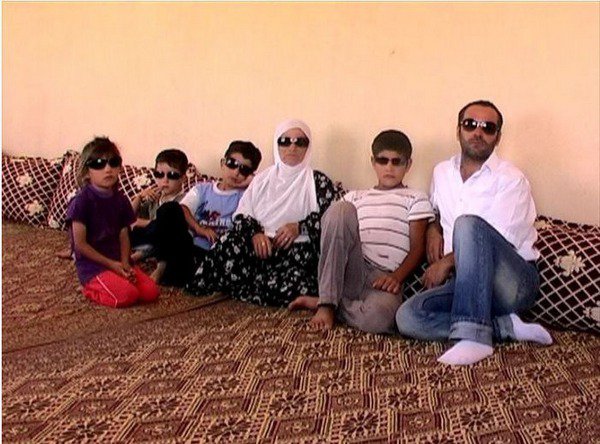 The term “inattentional blindness” is coined in psychology and refers to the condition that the subject fails to notice a fully visible but unexpected object, because attention has been engaged on another task, event or object. This phenomenon is not the result of visual impair or deficiency.

The exhibition at Galeri Zilberman focuses on how the media, politics and the advertising industry are instrumental in the manipulation of awareness of “free choice” and problematizes the role of the sense of sight in these manipulation processes, from physical, social and mental aspects. The artists in the exhibition deploy various strategies in relation to notions of visibility and perception.

Political questions about our perception of justice, the normalization of injustice and its social consequences are raised in Sophie Dvořák’s drawings, while Claudia Larcher’s video animation challenges our spatial perception. Berat Işık’s videos deal with the strong connection between invisibility and otherness: “Dancer in the Dark”, reminds the audience the notion of social blindness, whereas “Eyes Wide Shut” shows the mechanisms of keeping masses blind. “Apocalypse Please” on the other hand, imagines a family representing the suppressed other, deciding to abolish their sense of sight.

In his site-specific installation, Şakir Gökçebağ shifts the possible meanings that are embedded in materials and daily objects. At his photography work “Untitled (leafs)”, he creates optical illusions by directly manipulating the objects he shoots, instead of digitally retouching them.

A game of soccer is reduced to the shadows of the players on the field in Liddy Scheffknecht’s video “Outshine”, while her work “Crop” persuasively connects an otherwise irrelevant shadow and a false object, by shifting the viewer’s attention.

With her performative act, Aylin Tekiner contributes to information manipulation processes. Bernd Oppl’s version of “Angular Field” addresses questions on the subjectivity of perception, and the interaction between the virtual space and the autonomous object. While his work “Sick Building” and “Delay Room” shift viewer’s perception of the architectural space, the work “Hotel Room” goes a step forward, presenting a subtly and slowly freezing impersonal hotel room.

The exhibition “Inattentional Blindness” is accompanied by a catalogue, and will be on view through February 22.

“Territory”, the new exhibition by the young and prolific Seçil Erel opens at Galeri Zilberman on January, 10.

In her latest work, the artist enhances the idea of space that is present at the foundation of her paintings and focuses on her own personal history through the spaces she has lived in. Detailed textures which have been constructed in geometrical series in her abstract paintings, render the architectural structures with mathematical models and present a projection of her life experience there.

In this last series, units come together to form wholes, and the things that accumulate in personal memory come side by side in an abstract exposition, on the painting surface as well as the gallery space. The compositions which the artist has created using her idiosyncratic analytical extrication, present the audience with an extended analysis advisory with its stylistic and chromatic construct. The dimensions which mathematically fold into one another, set up a strong and consistent internal order with the rhythmical structure she creates. Erel’s delicate analytical extrication follows –after the plans of the spaces her growth and development periods mirror— a time-index sequence with the spaces that served as her workshop in which she materialised her artistic work and herself as an artist. The memory consisting of the life experiences and remembrances translates itself onto a plastic planar dimension through colours and traces. The organic colours and textures that spread in every direction during the first process Erel applies onto the canvas, follow a similar procedure in reverse order, setting a strong ground for a sharp, controlled and determined construct that’s built upon it.

The work that appears at the centre of the exhibition space is a painting-installation that consists of 55 separate pieces, called “Arsan Apt: Kurgu Ev” (Arsan Apt: House of Fiction). In this work which is made up of surfaces that have been sized through systematic growth, Erel tries out a structure in which she makes architectural values clash with personal ones. Created using a pictorial mapping technique, this work institutes a structural similarity with the construct the artist has built on the surface with layers of paint. Through this painting-installation, the artist renders possible the idea of the movability of the ‘immovables’.

“Territory”, Seçil Erel’s search for her own personal history through the traces of her own painting style, can be visited at Galeri Zilberman at Mısır Apartmanı until February, 22.