The Autoconstruccion Suites. A presentation of sculptural objects which were characterized by the acts executed during production: the enveloping, tearing, folding, bending and compressing of the materials involved. 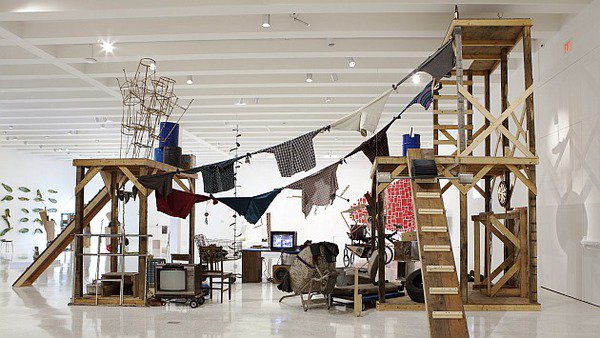 With this exhibition, Haus der Kunst stresses its continuing commitment to pronounced positions of sculpture in contemporary art. This exploration included "Sculptural Acts" (2011), a presentation of sculptural objects which were characterized by the acts executed during production: the enveloping, tearing, folding, bending and compressing of the materials involved.

The installation by Manfred Pernice, installed in autumn 2013 in the middle hall (DER ÖFFENTLICHKEIT - VON DEN FREUNDEN HAUS DER KUNST. Manfred Pernice, Tutti IV) navigates in the ambiguous zone between stability and instability, combining pieces from earlier works. The "Autoconstrucción Suites" by Mexican-born artist Abraham Cruzvillegas presents an intriguing concept of thinking about sculpture in its urban and social context.

"Rather than simply presenting models of poor people's architecture, my main purpose is to generate knowledge and understanding of how human activity produces forms. Buckminster Fuller said that matter should be organized by sympathy, a concept that I apply to my collections of objects, images, and sounds as well as my three-dimensional work." - Abraham Cruzvillegas

Over the past ten years, Abraham Cruzvillegas (born in 1968 in Mexico City) has developed a compelling body of work that integrates his interest in form and matter within the physical landscape of Ajusco, a volcanic landscape just south of Mexico City.

The construction of a settlement there began in the 1960s. The building was a direct consequence of the migration from country to city caused by the state's neglect of agricultural issues in favor of industrial development, which was perceived as a recipe for progress.

The numerous immigrants from the countryside found themselves in a precarious economic situation once they arrived in Mexico City. They therefore created their own dwellings with no funding and no architectural plan. The materials and techniques people used were almost entirely improvised and based on whatever was available in the immediate surroundings.

The self-constructed buildings in Ajusco reflected concrete needs in concrete family situations, like building an extra room, modifying a roof, improving, changing, or eliminating one space or another. The extended community of relatives and neighbors was involved in the building process. Autoconstrucción (self-building) is generally a process of human warmth and solidarity. Abraham Cruzvillegas lived in the Ajusco settlement and "for the first 20 years of his life he watched the construction of the house where his family lived and took part in the process."

The video "Autoconstrucción: A Dialogue between Ángeles Fuentes and Rogelio Cruzvillegas" (2009) - the artist's parents - underscores the importance of securing basic rights like water and education alongside constructing urban space. Fuentes remembered different moments in these struggles, such as when the immigrants filled the street with dirty laundry to demand access to running water, or when they organized independent public schools. Under the slogan of "No somos machos pero somos muchas" (We're not men, but we are many), the women of Mexico City's working-class neighborhoods won basic rights.

The exhibition concentrates on works that follow the principles of self-construction. The "Autoconstucción Suites" begins with a look at the house as a whole; its details and improvised techniques born of the organic need to create a human habitat by any means necessary, a space that becomes spontaneous, contradictory, and unstable as it progresses. Instead of emphasizing construction details, Cruzvillegas shows the dynamics of the building process, closely observing especially unstable elements like obstacles, debris, constraints, leaps and jumps, tremors and unevenness, falling materials, ricochets and cracks.

Between 2005 and 2012, the artist embarked on a series of artist residencies that enabled him to work within different environmental and ecological contexts in Europe, Asia, and the United States. "Bougie du Isthmus" (2005), for example, is inspired by an improvised device made by fishermen in Istanbul that is rigged to a tire, enabling no-hands fishing.

The wine racks that support the rods refer to wine production in the Loire Valley where the Atelier Calder is located; while the colorful fabric flags recall traditional village festivals originating in the Isthmus of Tehuantepec in Oaxaca, Mexico, where women march in the streets with colorful scarves attached to sticks and brooms. In Scotland in 2008, where he spent six months, Cruzvillegas worked with what he terms "local economic systems," sourcing and scavenging materials - wool, sheep dung, chicken wire, discarded furniture, cardboard, stones, and grass - directly from the countryside and city.

In 2010 Cruzvillegas began producing a series of standalone anthropomorphic self-portrait sculptures. The components are comprised of his personal belongings (shoes and tote bags appear often in these works) and carry complex, often humorous titles, like "Autorretrato jacarandoso con las manos ocupadas" (Merry Self-Portrait, with My Hands Busy), inferring a specific place and time. In this way, Cruzvillegas proposes that a true portrait is not the sum of an integrated whole, but is rather a collection of disparate "experiences, sensations, knowledge, and language."

Elements of composition are the disparate, cumulative, and affective search for expressive signs. A distinctive feature of Cruzvillegas's work is that it always possesses a consciousness of physical presence, immediacy, and urgency - as a result of an interaction with objects.