The show brings together the artist's 3 sculptures of island cities -Hong Kong Island (Chinese) (1998), Little Manhattan (2007-2009), and the recently completed Venezia (2013)- each metropolis intricately miniaturized into a single block of marble. 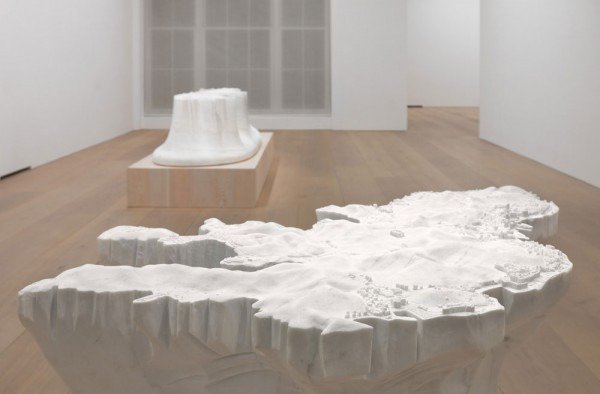 David Zwirner is pleased to present Sculpture, an exhibition by Yutaka Sone in the London gallery. The show brings together the artist’s three sculptures of island cities—Hong Kong Island (Chinese) (1998), Little Manhattan (2007– 2009), and the recently completed Venezia (2013)—each metropolis intricately miniaturized into a single block of marble. Exhibited together for the first time, they span over twenty years of Sone’s practice, and occupy a momentous part of his oeuvre.

Across a wide range of media—predominantly sculpture but also painting, drawing, photography, video, and performance—Sone’s work revolves around a tension between realism and perfection. A conceptual framework, paired with a meticulous attention to detail, has characterized his practice since the early 1990s, informing equally his self-contained jungle environments, life-size roller coasters, magnified snowflakes, and staged events. His sculptures in particular attest to a profound interest in landscapes, whether natural or architectural, and their ability to capture light relates them to a genre primarily associated with painting and photography.

Sone’s inspiration for the island sculptures derives from this captivation with landscapes and a general aversion to national borders. Their self-contained shapes offer him the unique opportunity to present a whole. As he puts it: “I don’t like to cut up a landscape. An island is a single thing: it has no ends, no beginnings. There is no editing, no exclusions.”He carves his three-dimensional cities in hands-on collaboration with marble artisans in a village in southwest China, where he keeps a studio. While each sculpture has developed gradually over several years, the technology used has changed significantly. For Hong Kong Island (Chinese), the artist relied on maps, aerial photographs, and frequent trips to the island. To create Little Manhattan, he added helicopter rides and an early version of Google Earth. For Venezia, completed earlier this year, Sone made almost exclusive use of the internet application and undertook only a handful of site visits.

The works offer commemorative portraits of the ever-changing urban landscapes with a refinement that recalls classical sculptures of antiquity. Hong Kong’s skyscrapers, housing complexes, stadiums, and harbor are as faithfully rendered as the hills in the center of the island; the avenues and cross streets of Manhattan receive equal prominence to the paths through Central Park; and the myriad canals that intersect the historical district in Venice create a visual contrast to the streamlined train tracks near the bridge to the mainland.

Also exhibited will be a new Canary Island palm tree made from rattan woven around a metal armature. Carefully crafted at the artist’s studio in Mexico, the leaves, stems, and trunk have been hand-painted and include naturally occurring flaws in their pigmentation. From a distance, the tree looks like its living counterpart, offering an almost perfect mimesis that echoes the perfectionism of the marble sculptures.

Born in 1965 in Shizuoka, Japan, Yutaka Sone studied fine art and architecture at Tokyo Geijutsu University. In 1999, the artist joined David Zwirner, where he had his first United States solo exhibition that same year, marking the first of five at the gallery in New York.
Opening on November 21, 2013 will be a two-person exhibition of works done in collaboration by Sone and Benjamin Weissman at the Santa Monica Museum of Art in California. The artist’s work was recently the subject of two solo exhibitions in Tokyo: Perfect Moment at the Tokyo Opera City Art Gallery in 2011 and Snow at the Maison Hermès Le Forum in 2010. Baby Banana Tree, the artist’s 25-foot tall hand-painted sculpture, was installed in 2009 as a major public artwork at the Boone Sculpture Garden at Pasadena City College in Pasadena, California.
Other venues which have hosted important solo exhibitions include Parasol unit foundation for contemporary art, London (2007); Kunsthalle Bern, Switzerland; Aspen Art Museum, Colorado; The Renaissance Society at the University of Chicago (all 2006); Museum of Contemporary Art, Los Angeles (2003); and the Toyota Municipal Museum of Art, Toyota, Japan (2002). The artist represented Japan, along with Motohiko Odani, at the 50th Venice Biennale in 2003.
Work by the artist is held in international museum collections, including The Art Institute of Chicago; High Museum, Atlanta, Georgia; Kunsthalle Bern, Switzerland; Mori Art Museum, Tokyo; Museum of Contemporary Art, Los Angeles; Museum of Contemporary Art, Tokyo; The Museum of Modern Art, New York; Tate Gallery, London; and the Whitney Museum of American Art, New York. He lives and works in Los Angeles.