Framing Sculpture. A group of 40 works and more than 60 photographs that the artists took - at the beginning of the 20th century - of their sculptures afford a unique insight into their artistic practice. Contemporary the museum is exhibiting ceramics in the Klaverblad made by the potters Lucie Rie and Hans Coper. 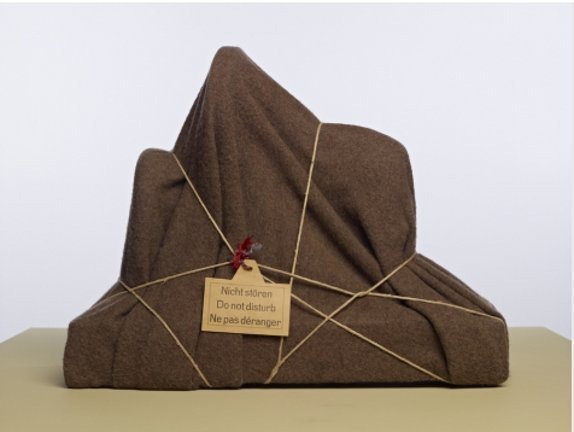 Next spring Museum Boijmans Van Beuningen is showing the work of three of the most influential artists of the twentieth century: Constantin Brancusi (1876-1957), Medardo Rosso (1858-1928) and Man Ray (1890-1976). Masterpieces will be flown in from top collections all over the world, including the Centre Pompidou in Paris and the Museum of Modern Art in New York. They include iconic sculptures never shown in the Netherlands, such as Brancusi’s ‘Princesse X’ (1915-16) and ‘Colonne sans fin’ (1918). Brancusi, Rosso and Man Ray all used photography in an innovative way in their work. A group of forty sculptures and more than sixty photographs that the artists took of their sculptures afford a unique insight into their artistic practice.

Three pioneers of modern sculpture
Rosso, Brancusi and Man Ray were decisive for the development of modern sculpture. Together with Auguste Rodin (1840-1917), Medardo Rosso is seen as the artist who introduced the Impressionist style to sculpture. Brancusi is known as the founder of modern sculpture with his highly abstracted forms in polished bronze and marble. Man Ray, who is best known as a photographer and painter, played an important role in Dada and Surrealism. He combined everyday items to create new objects, comparable to the ‘readymades’ of Marcel Duchamp (1887-1968). He also developed his own photographic technique, which he called ‘rayography’.

Framing sculpture
After 1900 technical developments made photography easier and more affordable and therefore accessible to more people. At the beginning of the twentieth century, artists increasingly sought a new language of forms in photography. Brancusi, Rosso and Man Ray employed photography not so much as a means of recording their work as a way of making clear how observers should view and interpret their works. They used experimental techniques such as overexposure, innovative camera angles and blurring the foreground or background. Brancusi, for example, photographed his works in direct sunlight so that the polished bronze flashes dramatically in the photographs. He would not allow anyone else to photograph his sculptures so that the representation of his work remained entirely in his own hands. Rosso manipulated his photographic prints by re-photographing them, cutting and writing on them. While Man Ray embraced a more versatile approach, he explored a cameraless photography technique by placing objects directly onto the phographic paper. The exhibition shows how even at the beginning of the twentieth century these three artists were preoccupied, each in his own way, with themes of representation and manipulation: themes that are considered very contemporary.

Parisian avant-garde
The rare confrontation of these three artists in a single exhibition reveals unexpected similarities in their experimental and groundbreaking approach. Although none of them was French, they each lived and worked in Paris for an important part of their careers. Man Ray helped Brancusi to create a darkroom in his studio, where he could develop his photographs, but did not rate Brancusi’s photographs highly, although he greatly admired his sculptures. There is a clear similarity between the pose of famous model Kiki de Montparnasse in Man Ray’s photo ‘Noire et blanche’ (1926) and Brancusi’s sculpture ‘Muse Endormie’ (1910), which was in turn influenced by a Rosso’s ‘Enfant malade’ (1893-95).

Multimedia spaces
Visitors to the exhibition can experiment themselves with photography and representation. In three multimedia spaces they can use the techniques employed by Brancusi, Rosso and Man Ray.
Boijmans Tour, catalogue, ARTtube video and more

The exhibition is accompanied by a specially developed multimedia tour, which will enrich the visitor’s experience through texts, images, audio and video. With the Boijmans Tour the museum invites visitors to upload a photo or video or leave a reaction. A richly illustrated catalogue in Dutch and English editions with contributions by international experts will be available from the museum shop and via webshop.boijmans.nl and there will be an introductory video on ARTtube.nl.
The museum is organising two thematic afternoon events, an introductory course and workshops for adults and children. A church service will offer an opportunity to reflect upon the exhibition and the museum is organising a historical lunch with recipes by the artists themselves.

La Muse endormie by Brancusi
Brancusi’s sculpture ‘La Muse endormie' (Sleeping Muse, 1910) can be seen in the exhibition from 21 February 2014. This is a once-in-a-lifetime opportunity to see this work in Rotterdam. The fragile bronze sculpture is one of the highlights of the collection of the Art Institute of Chicago and is rarely loaned to other museums. Following a presentation by the Chicago museum, the sculpture will come directly to Rotterdam.

The quality of Museum Boijmans Van Beuningen’s collection makes it possible for the museum to borrow important works of art such as this sculpture. In exchange for 'La Muse endormie', the museum is lending several paintings by Magritte to Chicago, including 'Youth Illustrated’ (1937).
With the support of

The exhibition 'Brancusi, Rosso, Man Ray - Framing Sculpture' has been made possible by the Turing Foundation (Turing Toekenning 2013), the Boijmans Business Club, VSBfonds, Prins Bernhard Cultuurfonds (made possible by Breeman Talle Fonds), the Mondriaan Fund, AON, Cultural Heritage Agency of the Netherlands on behalf of the Ministry of Education, Culture and Science for the indemnity grant and the Kring Van Eyck.

Museum Boijmans Van Beuningen is exhibiting ceramics in the Klaverblad made by the potters Lucie Rie (1902-1995) and Hans Coper (1920-1981). The museum owns thirty-seven pieces by Rie and twenty-six by Coper. They will be on display for six months. In 1967 former curator Dorris Kuyken-Schneider invited these two potters to Rotterdam for the first time to give a combined presentation. Since then the work of both these artists has become part of many elite museum and private collections all over the world.

Lucie Rie and Hans Coper are considered to have been the most eminent British potters of the second half of the twentieth century. Yet neither was born in the United Kingdom. Both fled from the growing menace of the Nazi regime at the end of the nineteen-thirties. Lucie Rie was a fully qualified and accomplished ceramicist when she emigrated from Vienna to London in 1938. In 1939 Hans Coper was a young man of 19 when he fled Germany, where he was born. His career as a potter started in 1946 as an assistant to Lucie Rie. It was the start of close friendship and cooperation.
The way they worked

Throughout her career Lucie Rie carried on doing her own thing regardless. Initially she ignored advice from the influential British potter Bernard Leach, and later on she similarly took no notice of the innovative trends in the work of contemporaries. Rie based the shapes of her pieces on classical ceramics, the dateless bowl, vase and pot. She experimented with colours and textures and she devised a wide range of decorations. She was best known for her line decorations, a few lines, sometimes crossing, applied in sgraffito or with a brush. A special feature of her works was that all of them were glazed when they had only been dried. This meant that they only had to be fired once.
Hans Coper's pots were less conventional than Rie's. His work is also less colourful. Coper used mainly white, buff, brown and black. Unlike the refined crockery that Coper made together with Rie, his vases are more monumental. His work can best be characterized as searching for new shapes. He created these forms using separate pieces, which he threw on a potter's wheel, but were cut to size afterwards. Sculpture was his greatest source of inspiration. He particularly admired Constantin Brancusi and Alberto Giacometti. Like them, Coper paid a great deal of attention to the correct relationship between the object and its base.
Boijmans Study

At the same time as this exhibition, the museum is publishing a lavishly illustrated study 'The essential potness - Lucie Rie and Hans Coper in Museum Boijmans Van Beuningen'. Text and final editing by Mienke Simon Thomas, based on texts by Dorris U. Kuyken-Schneider, Margreet Eijkelenboom-Vermeer and Titus M. Eliëns. The study is available in Dutch and English versions from the museum shop and the webshop.

In 2007 Museum Boijmans Van Beuningen launched a series of scholarly publications about its own collection, the Boijmans Studies. In so doing the museum is rejuvenating its rich tradition of documentation about the works it owns, in particular the catalogues. The series covers a broad range of reviews and analyses that consider a single work or a section of the collection, as well as the history of the museum and its contents.
Sponsor

The exhibition 'Lucie Rie and Hans Coper' is being made possible by the support of Stichting van Achterbergh - Domhof.

Thursday 6 February is the Press preview
The programme is as follows:
11.15 am - arrival with coffee/tea and petit fours.
11.30 am - welcome by director Sjarel Ex and introduction to the exhibition by curators Peter van der Coelen and Francesco Stocchi.
Followed by visit to the exhibition in the presence of the curators.
1.15 pm - lunch in the museum's restaurant.

Saturday 8 February is the official opening of the exhibitions ‘Brancusi, Rosso, Man Ray - Framing Sculpture’ and 'Lucie Rie and Hans Coper’.
The program:
13 pm
A discussion about the exhibition 'Brancusi, Rosso, Man Ray - Framing Sculpture' in the Auditorium with leading experts.
Reserve a place for the round table discussion here.
15 pm
Official opening in the restaurant of the museum. Guest speaker is Anne Vegter, Dutch Poet Laureate.
The museum closes at 5 pm.