Turbulence. Placed exactly at the centre of Mathaf's exhibition space, this installation lies at the heart of a linear but non-chronological presentation of works whereby a number of unexpected juxtapositions echo the complexity through which the artist has managed to challenge, and at times disturb, our experience of the ordinary. 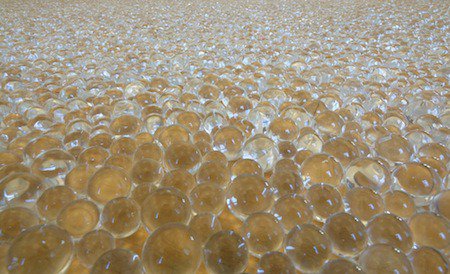 Mathaf: Arab Museum of Modern Art in Doha presents Mona Hatoum's largest solo exhibition to date in the Arab world. Mona Hatoum: Turbulence highlights the diversity of Mona Hatoum’s work over the past 30 years. Curated by Sam Bardaouil and Till Fellrath of Art Reoriented. The exhibition’s premise has evolved from a key new work: Turbulence (2012), a four-by-four-meter square composed of thousands of glass marbles laid directly onto the floor. Placed exactly at the centre of Mathaf’s exhibition space, this installation lies at the heart of a linear but non-chronological presentation of works whereby a number of unexpected juxtapositions echo the complexity through which the artist has managed to challenge, and at times disturb, our experience of the ordinary.

The Chairperson of Qatar Museums Authority, HE Sheikha Al Mayassa bint Hamad bin Khalifa Al-Thani has said about Mona Hatoum's exhibition: "Qatar Museums Authority is proud to feature one such iconic artist at Mathaf and to provide this opportunity for audiences in Doha to encounter Hatoum's diverse and challenging body of artworks produced over the last three decades."

Mona Hatoum: Turbulence consists of more than 70 works ranging from large-scale room installations such as Light Sentence (1992) and Suspended (2011) to smaller works on paper and sculptural objects such as Projection (2006), and Untitled (wheelchair II) (1999) respectively. It also includes some of the artist's kinetic installations such as + and – (1994–2004) and Home (1999). The exhibition is punctuated with a number of the artist's photographs including Van Gogh's Back (1995) and Static Portraits (Momo, Devrim, Karl) (2000), as well as documentations of early performances such as The Negotiating Table (1983) and Roadworks (1985), highlighting the diversity of artistic undertakings that span the artist’s prolific three-decade oeuvre.

The choice of the notion of turbulence as a conceptual framework for the exhibition is derived from the thematic and formal dichotomies inherent within the artist's work. These render it familiar yet perplexing, allowing for an intense aesthetic experience that is both inviting yet impenetrable, or, in other words, turbulent. On an internal level, turbulence echoes the artist's questioning of self and, in particular, of ideas of alienation and displacement. Externally, it is a reflection of her interrogation of notions of belonging and collective memory. And finally, on a formal level, turbulence can be seen as a product of the artist’s ongoing inquiry into ways of expanding the formal and material qualities of artistic expression.

Abdellah Karroum, Mathaf's Director, has said: "Mona Hatoum is one of the most influential artists of her generation. Few living artists have developed a conscious and engaged artistic vocabulary that inspires new generations of artists, art historians, and art audiences. Mona Hatoum is one of those artists. She is an artist with whom I have had the pleasure to work in the past. With this exhibition, Mathaf recognizes the centrality of Mona Hatoum's art to the history of twentieth and twenty-first century."

Mona Hatoum: Turbulence is on view at Mathaf: the Arab Museum of Modern art from 7 February until 18 May. A fully illustrated bilingual Arabic-English catalogue designed by Huda Smitshuijzen Abifares will be released by Mathaf and Silvana Editoriale publishing.