Works from the collection of the Kunstmuseum Liechtenstein at Gasometer Triesen. On show are almost forty works from 1899 to the present, including pieces by Max Bill, Le Corbusier, Marcel Duchamp, Rebecca Horn, Heinz Mack, Regina Marxer, Steven Parrino, Martin Walch. 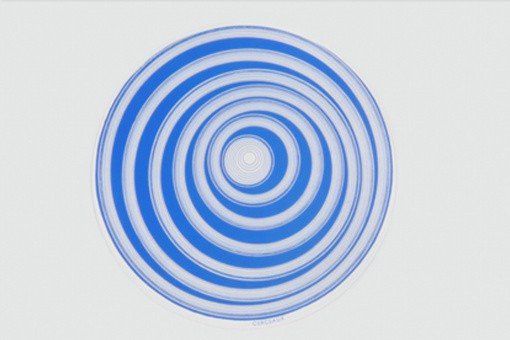 "MOVE!" is an exhibition in which the question of movement plays a key role. Movement means life: our heartbeat, breath, even thinking is based on movement. Movement, along with time, space and light, are the concepts which define the starting point of this exhibition.

Movement is, in a nutshell, a condition beyond rest. It plays a significant role in many scientific disciplines. And where do we find movement in art?

Is movement visible in the works? What role does this “Move” play for the artwork, for the viewer? Do we perceive art differently with the thought of movement in our minds?
The very act of viewing plays a key role. The eye moves up and down, to and fro. We experience the image as frozen motion, engaging with it and being moved by it. For example in the case of Le Corbusier’s drawing of women dancing wildly or the gestic movement in Richard Tuttle’s etching.
Only two works, by Rebecca Horn and Heinz Mack, are actually moved by motors.

Despite the static rest in most of the works, movement is omnipresent throughout the exhibition. The viewer reflects on himself in art, indeed quite literally so in Max Bill’s “infinite surface in form of a column”, thus beginning to move himself. Steven Parrino’s displaced canvas, finally, causes classical painting to become shaky, transforming it into a symbol of energy. Everything begins to move.

Not least, the title of the exhibition, "MOVE!", conveys the idea of transporting the Kunstmuseum to a different place. Kunstmuseum goes Gasometer!

PLEASE NOTE: the movie will be shown at TaKino (zollstrasse 10, Schaan)