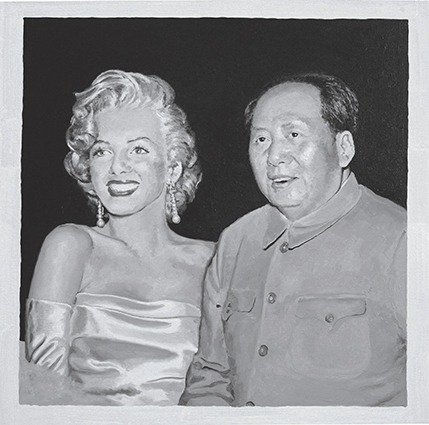 The title of the show is based on a Roland Barthes’s article, “The Face of Garbo”, in which he affirms:

Viewed as a transition the face of Garbo reconciles two iconographic ages, it assures the passage from awe to charm. As is well known, we are today at the other pole of this evolution: the face of Audrey Hepburn, for instance, is individualized, not only because of its peculiar thematics (woman as child, woman as kitten) but also because of her person, of an almost unique specification of the face, which has nothing of the essence left in it, but is constituted by an infinite complexity of morphological functions. As a language, Garbo's singularity was of the order of the concept, that of Audrey Hepburn is of the order of the substance. The face of Garbo is an Idea, that of Hepburn, an Event.

Starting from this inspiration, Shi Xinning paints forty-nine small canvases depicting the movie stars of the past using the two non-colors, black and white, characteristic of his previous production.

On show three among these paintings represent the artist's most famous work, in which the president Mao Tse-tung is the protagonist and, in an impossible reality, he is accompanied by Hollywood actors and singers like Elvis and the Beatles.

This kind of work recalls what in the 90’s was called "Mao Phenomenon": an historical circumstance in which the figure of the president has become one of the dominant elements of Chinese culture. His image, in fact, has been reproduced on any type of media: from amulets to key rings, from commemorative stamps to lighters.

During the Cultural Revolution, people hoped to keep up with the western world, to overcome it, but they were trapped by an increasingly oppressive government, where attacks and internal cleansing were the order of the day.

Shi Xinning explains that the spectator, through his works, projects his knowledge of historical facts and people represented, to open the doors of imagination.