The Sleep of Reason. The exhibition, curated by Selen Ansen, features a number of his seminal works along with some of his most recent paintings and sculptures. The show revolves around history, time and space, body and identity related themes, which the artist has been exploring since the 1990s. 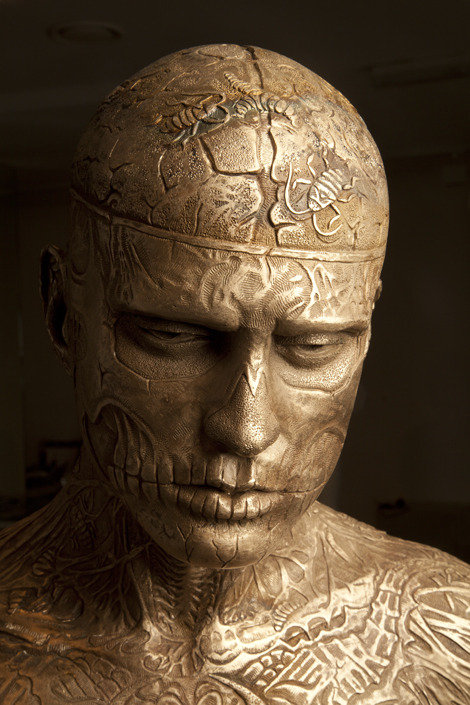 “The Sleep of Reason” brings together more than 30 works the artist has produced since 2000. Presenting the wide range of media and materials used by Marc Quinn, the exhibition features a number of his seminal works along with some of his most recent paintings and sculptures, which will be shown for the first time at ARTER. “The Sleep of Reason” revolves around history, time and space, body and identity related themes, which the artist has been exploring since the 1990s and proposes an investigation into the relationship between nature and culture as well the interaction between art and technology through dependency.

The exhibition’s title is inspired by Goya’s etching “The Sleep of Reason Produces Monsters” (from the series of aquatint plates entitled “Los Caprichos”, 1799). In the etching, the artist represents himself sleeping, surrounded by the products of his own imagination, monsters and nightmares. Named in reference to this etching and departing from its moral and historical context, Marc Quinn’s exhibition at ARTER proposes an extension of our perception towards the realm of the immaterial or that of the invisible by connecting the particular to the universal and challenging our framing of reality.

Marc Quinn’s works often abound with references to the complex process of Creation, linking human history to the cyclic temporality of the universe. The self-portraits he has been producing since 1991 using his own frozen blood, or his sculptures that invert the aesthetic norms culturally standardized for the human body, underline the artificial, temporal and historical nature of dualisms that define human life (Self/Other, Body/Mind, Nature/Culture) while exploring the mutual belonging of differences or binary oppositions such as Life/Death, Birth/Destruction. In his works, “the body” operates as a site through which the artist suggests new readings of the relationship between the “inside” and the “outside”. Marc Quinn’s works offer the “inside” a new, fascinating and troubling visibility, whereas the “outside” is revealed as being constitutive of the “inside”, both finding a common ground by being re-cast in the artificiality of the artwork.

Art theorist Selen Ansen has devised the exhibition around the theme of the “threshold”, as a passageway and as a space of reversibility between internal and external: the historical and abstract notions which refer to the categories that shape our understanding of the world, as well as our relationship to the Other in the construction of our selves.

“The Sleep of Reason” opens with the sculpture entitled “The Origin of the World (Cassis madagascariensis)”. This monumental cast of a seashell introduces a threshold from the start, owing to its half-open shape, as well as its universal form, by linking human birth to the creation of the world on a symbolic level. Previously shown in various open-air spaces, the piece finds a new home indoors and invites the outside to come inside by extending the limits of our gaze.