A World of Its Own

Photographic Practices in the Studio. Street photography is a beloved and well-known practice-but what happens when photographers find inspiration within the four walls of their studios? Find out in this engaging exhibition, including works by artists such as Berenice Abbott, Constantin Brancusi, Irving Penn, Cindy Sherman, and Robert Frank. 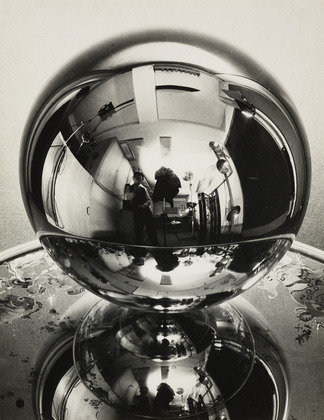 A World of Its Own: Photographic Practices in the Studio examines the ways in which photographers and other artists using photography have worked and experimented within their studios, from photography’s inception to the present. Featuring both new acquisitions and works from the Museum’s collection that have not been on view in recent years, A World of Its Own brings together photographs, films, and videos by artists such as Berenice Abbott, Uta Barth, Zeke Berman, Karl Blossfeldt, Constantin Brancusi, Geta Brătescu, Harry Callahan, Robert Frank, Jan Groover, Barbara Kasten, Man Ray, Bruce Nauman, Paul Outerbridge, Irving Penn, Adrian Piper, Edward Steichen, William Wegman, and Edward Weston.

Depending on the period, the cultural or political context, and the commercial, artistic, or scientific motivations of the artist, the studio might be a haven, a stage, a laboratory, or a playground. For more than a century, photographers have dealt with the spaces of their studios in strikingly diverse and inventive ways: from using composed theatrical tableaux (in photographs by Julia Margaret Cameron or Cindy Sherman) to putting their subjects against neutral backdrops (Richard Avedon, Robert Mapplethorpe); from the construction of architectural sets within the studio (Francis Bruguière, Thomas Demand) to chemical procedures conducted within the darkroom (Walead Beshty, Christian Marclay); and from precise recordings of motion (Eadweard Muybridge, Harold Edgerton) to playful, amateurish experimentation (Roman Signer, Peter Fischli and David Weiss). A World of Its Own offers another history of photography—a photography created within the walls of the studio, and yet as innovative as its more extroverted counterpart, street photography.