The exhibition focuses on the period between 1950 and 1970, decades when New York's cultural influence was unrivaled and some of the most important artistic movements of the 20th century were born. On view will be iconic examples of Pop Art, Fluxus, Color Field, Assemblage, Minimalism, and Abstract Expressionism. 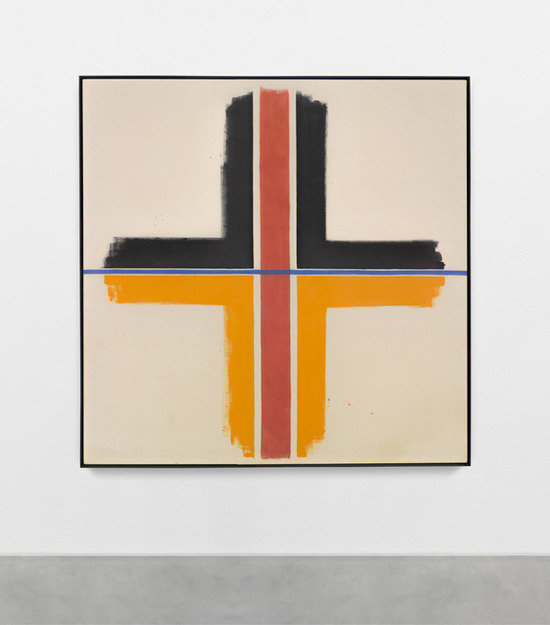 Beginning 7 February, Hauser & Wirth is honored to present an extraordinary selection of works from the collection of Reinhard Onnasch. A celebration of Onnasch’s longstanding passion for art and collecting, ‘Re-View: Onnasch Collection’ is curated by Paul Schimmel, celebrated post-war scholar and Partner of Hauser Wirth & Schimmel. The exhibition focuses on the period between 1950 and 1970, decades when New York’s cultural influence was unrivaled and some of the most important artistic movements of the 20th century were born. On view will be iconic examples of Pop Art, Fluxus, Color Field, Assemblage, Minimalism, and Abstract Expressionism.

Born in Görlitz, Germany in 1939, Reinhard Onnasch was one of the first German art dealers to open a gallery in New York City following World War II. His foray in Manhattan began in the autumn of 1973, with the debut of the Onnasch Gallery at 139 Spring Street and Gerhard Richter’s first solo exhibition in America. A pioneering figure, fascinated by the rapid succession of overlapping and competing movements, Onnasch introduced New York painters to Berlin and further exposed German artists to the American art scene. Although he emerged as a dealer and collector in the midst of the city’s financial collapse, he nevertheless succeeded in presenting major exhibitions and cementing a long-standing relationship with New York and its artists.

‘Re-View: Onnasch Collection’ proceeds through a succession of ten rooms. It begins with the vanguards of Abstract Expressionism, featuring works by Barnett Newman, Clyfford Still, and Morris Louis that trace the transition from field abstraction to gestural abstraction in the 1950s. Newman’s monumental canvas ‘Uriel’ (1955) – measuring eighteen feet wide and punctuated by ‘zips’ of white line – seems to answer Still’s insistently vertical compositions ‘PH-131’ (1951) and ‘PH-847’ (1953), made soon after the artist moved from California to New York. In contrast, Morris Louis’ iconic ‘Veil’ paintings (1954 – 1959), with billowing rivers of color on unprimed canvas, invite meditation on notions of purity.

The second room of the exhibition presents a counterpoint to the dominant style of Abstract Expressionism with works by Larry Rivers and Cy Twombly, artists who merged painting and drawing. In the ‘Journey’ (1956), Rivers depicts his own artistic and provocative personal history while Twombly’s ‘Leda and the Swan’ (1960) draws upon art historical reference, heightened by a moment of sexual energy with both male and female genitalia scattered across the canvas.

In rooms three and four, focus turns to the 1960s and the emergence Pop Art. Paying homage to the painterliness of the New York School, works by Claes Oldenburg and Jim Dine diverge in their obvious fascination with popular culture. America was rapidly becoming defined by mass production and the consumer imperative, present in day-to-day life through magazines, advertisements, and common objects. Oldenburg’s ‘Model for a Mahogany Plug, Scale B’ (1969) was among the earliest of the artist’s works to magnify everyday objects to fantastical proportions. Along with works by Robert Rauschenberg and George Segal, the art in these spaces also nods at the artists’ legacy as pioneers and promoters of early ‘Happenings’.

The fifth room appropriates Pop’s use of the ‘common object’ into the rich tradition of Assemblage. Works by Mark di Suvero, H.C. Westermann, and Christo emphasize the banal and disregard boundaries between so-called ‘high art’ and everyday life. The cool, pastel paintings of John Wesley in room six are further examples of a post-modern investigation into the common object. Sourcing images from mass media, Wesley’s work nostalgically recalls 1960s Americana; his super flat images evoke wallpaper, elements of graphic design, and decorative motifs.

Room seven exhibits works by longtime friends and collaborators Richard Hamilton and Dieter Roth, artists bent on removing the distinctions between hierarchies. For Hamilton, the Braun toaster functioned as the perfect ‘common object’, elevated to a status symbol through branding and design. While Roth’s ‘Zwerge (Dwarves)’ (1970) – a block of red-capped garden gnomes immersed in chocolate – embraces the accidental and unpredictability of its unstable materials.

Filled with art by Richard Tuttle from the 1980s, room eight offers visitors a rare immersion into a single, extraordinary body of work. Tuttle’s collage-like sculptures are generous, complex, and poetic, employing varied and modest materials, shapes, and colors that speak to his process-oriented Post Minimalist practice.

In room nine, the exhibition’s exploration of Assemblage, collage, and combine continues with George Brecht, Edward Kienholz, and Hannah Darboven, artists whose layering of sculpture with the performative and the cinematic anticipates such later influential figures as David Hammons, Paul McCarthy, and Jason Rhoades. The centerpiece of this grouping is the work of the self-taught West Coast artist, Edward Kienholz, for whom Reinhard Onnasch was an important early advocate. Confronting the horrors of nuclear war, Kienholz’s surreal work ‘The Future as an Afterthought’ (1962) exemplifies the artist’s penchant for sharp social criticism.

The exhibition’s tenth and final room looks at Minimalism and Conceptual Art – two movements arising almost simultaneously with Pop Art – through works by such artists as Ad Reinhardt, Dan Flavin, and Richard Serra, as well as select works by Daniel Buren. Two weighty, steel plates balance precariously, propped up against each other in the corner of the space, Serra’s ‘Do it’ (1983), speaks to the formal geometric abstractions of Minimalist Art while re-framing the viewer’s experience of sculptural volume and space.

Reinhard Onnasch was attracted to the individual personality of an artist’s work, a tendency that led him to build an extensive and eclectic collection with a multitude of themes and stories coursing throughout. ‘This is an unusually diverse collection,’ remarked Paul Schimmel. ‘It is rich in its strong commitment to both American and European art. It shows a uniquely openminded and exploratory approach to collecting that is incredibly rare and forms a stunningly diverse view of the currents and counter-currents of this era.’