"The secret services symbolise the highest degree of loyalty to an office, where the individual is expected to dissolve and vanish". Curated by Matteo Lucchetti, the group exhibition questions the workings of bureaucracy, in the time of so-called "leaked democracy". It features works by Lawrence Abu Hamdan, Rossella Biscotti, Libia Castro & Olafur Olafsson, Luca Frei, Jill Magid, Metahaven, Song Ta, Jonas Staal, Superflex and Pilvi Takala. 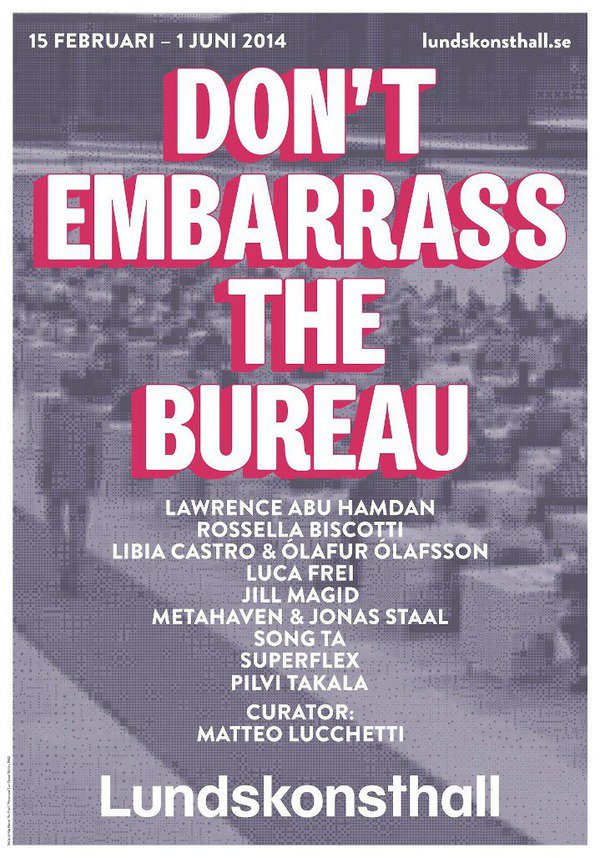 Lunds konsthall is glad to present Don't Embarrass the Bureau, a group exhibition organised by Brussels-based independent curator Matteo Lucchetti (Italy). The exhibition questions the workings of bureaucracy, in the time of so-called ‘leaked democracy’.

The title is borrowed from a novel from 1972. Its author, Bernard F. Conners, had been a FBI special agent for eight years and claimed to have written the first book revealing all the Bureau's secrets at all levels. The rule that all agents must internalise is: ‘Whatever happens, never ever embarrass the Bureau.’

The secret services symbolise the highest degree of loyalty to an office, where the individual is expected to dissolve and vanish. Any act that embarrasses the Bureau—or any other institution or organisation conscious of its reputation—will disrupt its regular functioning.

Superflex show a new work: a paper handed out to all visitors to make public the budget for Don’t Embarrass the Bureau.

Almost all these artists seem to ignore the title's imperative request by purposely contaminating an office (a workplace, a formalised function, a bureaucracy) with critical or ambiguous acts and thoughts. The works in the exhibition question the legitimacy of the structures that govern our social, political and economic life: from public administration to the corporate office, including Parliament and the secret services.

By doing this the artists also expose themselves, as professionals performing outside the operational field usually granted to them. Through their work they make us aware of a space that any citizen might decide to conquer, if only temporarily.

After WikiLeaks revelations, loud calls for transparency are now being heard, not least through the leaking of classified information, data from mass surveillance and other secrets from the Bureau. This is forcing contemporary bureaucracy to reorganize. The activism of Aaron Schwarz and others like him, and whistle-blowers like Edward Snowden, also inspire us to re-think how we perform our roles as citizens under a regime of pervasive and enforced visibility.

You can find more information on the research behind this exhibition at www.embarrassthebureau.tumblr.com/

Lunds konsthall thanks the lenders for this exhibition: Galerie Yvon Lambert in Paris, Galerie Diana Stigter in Amsterdam and Wilfried Lentz Gallery in Rotterdam. We are grateful for the support granted by Frame Visual Art Finland in Helsinki.