Baselitz and his generation

From the Duerckheim Collection. Featuring over 90 drawings and prints, this exhibition explores how six key post-war artists redefined art in Germany on both sides of the Iron Curtain. Half of the works are by Georg Baselitz, with the remainder by Markus Lupertz, Blinky Palermo, A R Penck, Sigmar Polke and Gerhard Richter. 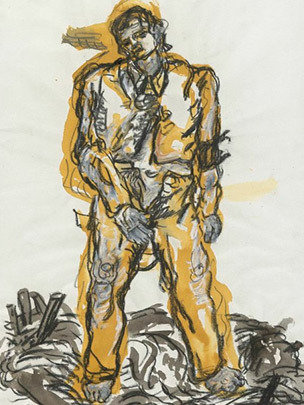 Featuring over 90 works by some of the leading names in contemporary art, this exhibition explores how six key artists redefined art in Germany in the 1960s and 70s and negotiated with the recent past, on both sides of the Iron Curtain. Half of the works on display are by Georg Baselitz (b. 1938), and 34 of the works in the exhibition, including 17 by Baselitz, have been generously donated to the British Museum by Count Christian Duerckheim. An additional loan of around 60 prints and drawings from the Duerckheim collection make up the rest of this fascinating exhibiton. The exhibition forms part of a series of shows and public programme examining Germany in 2014. A display of medals will show how Germany saw WW1 and an exhibition looking at key moments in the long history of Germany will open in October 2014.

The works come from one of the world’s finest private collections of contemporary German and British art. Count Duerckheim has presented the Museum with key works by Georg Baselitz, Markus Lüpertz, Blinky Palermo, A.R. Penck, Sigmar Polke and Gerhard Richter. Count Christian Duerckheim formed his collection of contemporary German art largely from the mid-1970s to the early 1980s. After he first came across the work of Baselitz in the early 1970s, he decided to form a collection that would represent, through key works, the dramatic history of his own times. Count Duerckheim was born in Saxony, near Baselitz’s birthplace, and has always shared a strong bond with the artist which led to him forming one of the most significant collections of his early works in private hands.

The gift included a group of eleven drawings by Baselitz from 1960 to the late 1970s, together with six prints from the same period. They cover the principal phases of his career from the Pandemonium drawings of the early 1960s, the development of his ironic ‘Heroes’ in the mid-1960s, the subsequent fracturing of his motifs to the eventual inversion of the motif from the late 1960s. There are also an important examples by Richter, including his Pin-up and Installation drawings, the characteristic Ice Age meets cybernetics stick-figures of Penck, as well as sculptural drawings by Lüpertz and Palermo, and a drawing and sketchbook by Polke satirizing the ‘economic miracle’ of post-war reconstruction in West Germany.

All the artists in this exhibition came originally from eastern Germany and migrated to the West, the majority before the borders were sealed in 1961. Some like Richter and Penck, who was the last to leave in 1980, had trained in East Germany, but it was in the West that their careers were established. As a generation they came out of the experience of growing up in the aftermath of a defeated Germany and its subsequent partition in 1949. Much of their work is informed by the sense of collective guilt experienced by the German people over its recent past, the country’s physical and psychological destruction, and the division of the country by two opposing ideologies – the democracies of the free West and the Communist socialist system of the Soviet bloc.

Count Duerckheim said ‘I am pleased to give this gift to the British Museum so that the important graphic art of 20th century Germany is reflected within its international collection. The exhibition and my collection is a story of change and movement, of life in progress. I have always felt this constant change and have gone with it, very much inspired by the artists I have collected. For me as collector it is a great honour to show my collection and to be a donor to the British Museum’
Notes to Editors:

To accompany the exhibition, a catalogue will be published by British Museum Press: Germany Divided: Baselitz and his generation. From the Duerckheim Collection, by John-Paul Stonard. This scholarly and fully-illustrated volume will feature new research and previously unpublished material from major public and private collections. Available from the British Museum Book Shop and online at britishmuseum.org. Priced £35.00 (hardback).

The exhibition will be accompanied by a public programme of lectures and events.