40 Years Galerie Max Hetzler. A particular exhibition featuring recent works by all the gallery artists. Parallel to the anniversary exhibition the gallery in Berlin-Charlottenburg will inaugurate an exhibition of works by American painter Joan Mitchell. 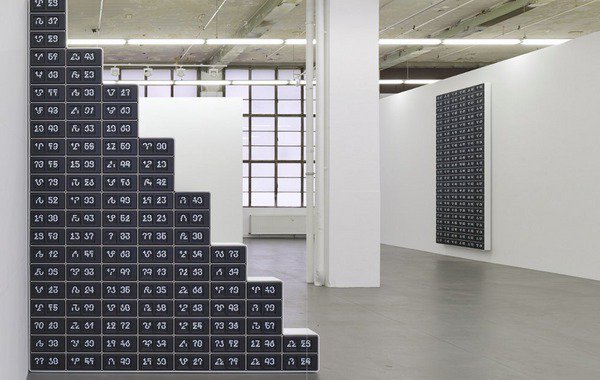 On November 10th, parallel to the anniversary exhibition REMEMBER EVERYTHING: 40 Years Galerie Max Hetzler, the Bleibtreustraße gallery in Berlin-Charlottenburg will inaugurate an exhibition of works by American painter Joan Mitchell.

On November 8th, acclaimed Lebanese sound artist Tarek Atoui will create a specific performance for the second space at Goethestraße in Berlin-Charlottenburg.

The gallery started in Stuttgart. After education at Kunsthaus Schaller and an internship at Hans Mayer, Düsseldorf, Max Hetzler decided to open his first gallery in 1974, with an exhibition by Erwin Heerich. At that time, a journalist from the Stuttgarter Zeitung noted: "Who wants to open a new gallery for avant-garde art today in Stuttgart, where galleries sprang up like mushrooms in the last years, should have a lot of bravery and optimism!" (W. Rainer, Stuttgarter Zeitung, 08.08.1974). Exhibitions by Mario Merz, David Rabinowitch, Klaus Rinke, Ulrich Rückriem and other international artists followed.

In 1983 the gallery moved to Cologne, the main art scene at the time, and pursued a programme with some of the most significant German and American artists from the 80's. The intense publishing activity of the gallery began at that time. Some exhibitions went down in history, like Das Geld by Albert Oehlen (1986), Martin Kippenberger's Peter (1987) and the two Jeff Koons solo exhibitions, Banality (1988) and Made in Heaven (1991), which were both held in a new gallery building designed by Oswald Mathias Ungers on Venloer Straße 21.

In 1989, Max Hetzler founded with American gallerists Lawrence Luhring and Roland Augustine the gallery "Luhring Augustine Hetzler" in Santa Monica, California, where Félix González-Torres, Cady Noland and Jorge Pardo, among others, have been exhibited.

The end of the art market boom at the beginning of the 90's led to the closing of the gallery in Santa Monica and brought a wind of change for Galerie Max Hetzler.

The "desire for an intellectual, cultural and political centre was obvious. It could only happen in Berlin (...). For artists, it only makes sense to show in a capital of discourse, a capital with an intellectual climate and the center for the arts." (Max Hetzler in: A. Lindemann, Collecting Contemporary, 2006, p.84).

Max Hetzler moved to Berlin in 1993, inaugurating a space in Charlottenburg in 1994 with an installation by Gerhard Merz, Berlin Travertin Romano Classico. The following year, a second space opened on Zimmerstraße, next to Checkpoint Charlie. This became soon the main gallery, where exhibitions by artists from different generations took place. Besides Darren Almond, André Butzer, Glenn Brown, Rineke Dijkstra, Vera Lutter, Albert Oehlen, Yves Oppenheim, Richard Phillips, Thomas Struth, Rebecca Warren and Christopher Wool, among others, there have been exhibitions of Soto, Twombly's sculptures and Warhol's portraits, underlining Berlin's new role as a magnet city, which was starting to attract a number of foreign artists, writers, curators and gallerists.

In 2006, Galerie Max Hetzler opened a space in a former light bulb factory, Osram-Höfe in Wedding, which became the main gallery in 2009. The 1,600 sqm of this industrial space hosted solo shows of Mona Hatoum, Marepe, Beatriz Milhazes, Ernesto Neto, Frank Nitsche, Michael Raedecker, Bridget Riley, Rebecca Warren, Toby Ziegler and others, as well as group shows, often accompanied by catalogues. The programme of Galerie Max Hetzler is conceived as a fruitful dialogue between established artists and younger generations; gathering positions in constant evolution.

A book entitled REMEMBER EVERYTHING : 40 Years Galerie Max Hetzler will be published by Holzwarth Publications, Berlin and Ridinghouse, London. Edited by Jean-Marie Gallais, this publication will document exhibitions held at the gallery since 1974, gathering conversations with the artists along with archive images.