Paintings, watercolors and drawings by Dutch artist Rene' Daniels produced between 1977 and 1987, avaible for the first time after 25 years. With this exhibition opens the Andreas Slominski's one at the Upstairs Gallery as well. 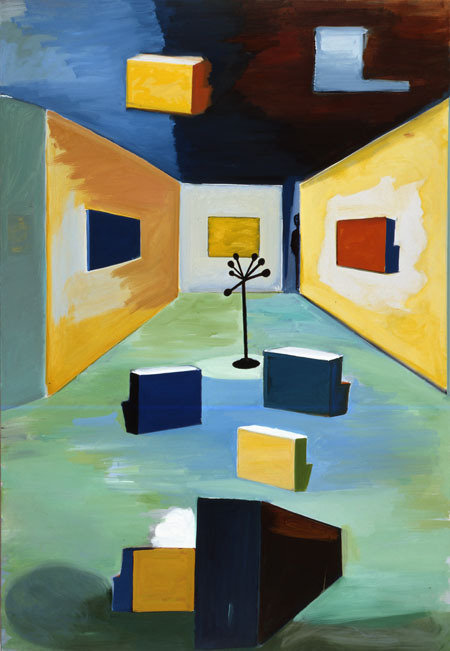 Metro Pictures presents paintings, watercolors and drawings by Dutch artist René Daniëls produced between 1977 and 1987. Selected from the artist’s own holdings, the exhibition of Daniëls’ groundbreaking work was made possible following the artist’s decision, after 25 years, to make the works available. The exhibition marks the resumption of Metro Pictures' 1980s representation of Daniëls, whose reputation has reached cult status and whose influence has grown despite the work having been virtually inaccessible.

Daniëls came to international recognition in the early 1980s and is among a small group of painters of a pivotal generation of artists who aligned themselves with the positions of conceptual artists but did not adhere to their restrictive material concerns, thus instigating an ever expanding arena of discourse. Unlike many artists at the time, Daniëls did not abandon painting; instead, he was one the first to adapt the medium to wider concerns, foregoing traditional reverence for the application of paint on canvas for more spontaneous methods that included the use of washes of color and drawn outlines that encompass a continuum of representational and abstract imagery.

Included in the exhibition are examples of Daniëls’ most iconic works and recurrent motifs. Among them are the “bowtie” works, so-called because of the abstract form that represents perspective views of gallery-type rooms with paintings on the wall. The room shape is at the base of Daniëls’ most exhaustive, but typical, pursuit of ever shifting physical, social, art historical and personal references. Along a spectrum of inclusion and exclusion, the “bowtie” works become rooms filled with paintings and objects, empty space where floating blocks of color represent paintings in a salon-style hanging, and at their most reduced, simple graphic hexagrams.

Daniëls lives and works in his hometown of Eindhoven, where he had his earliest museum shows at the Van Abbemuseum, which has the most extensive holding of his work. It was in the ‘70s that the Van Abbemuseum, under the directorship of Rudi Fuchs and then Jan Debbaut, became renowned for its pioneering exhibitions of conceptual and minimal art. During a residency at PS1 In 1977-78, Daniëls expanded his distinctive language of imagery to incorporate illusionistic forms such as skateboards and records, variants of the circle, and later spent six months prior to his first US exhibition at Metro Pictures in 1984 producing paintings that included New York subjects such as the Brooklyn Bridge and World Trade Towers. Daniëls’ second show at the gallery was in 1985. With his reputation growing but not fully established beyond close followers of contemporary art, Daniëls suffered a debilitating illness in 1987 that until recent years left him unable to continue his work. Metro Pictures presented a third exhibition in 2000 in tribute to his great work of the 1980s.