Paintings by Jules De Balincourt: whether figurative or abstract, the pictures teeter on the brink between strange yet realistic visions of life today. A selection of pieces made by Carolee Schneemann between 2000 and 2010, in particular two of her monumental works. "Sleeping beauty" presents works from the collection with nocturnal connotations or an aura of mystery. Invited artist: Jean-Francois Demeure chose Raoul Hausmann (1886-1971), founder of Berlin Dada. 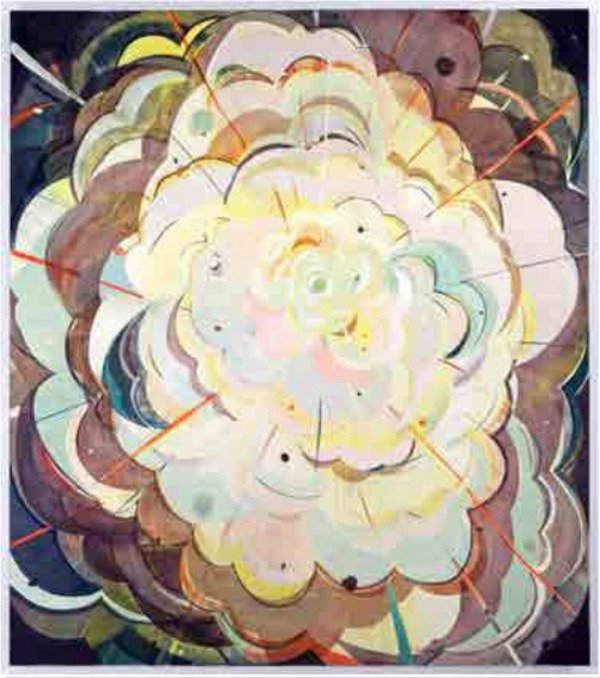 This spring, Rochechouart Museum of Contemporary Art hosts the first one-man show in France by Jules de Balincourt. Although French by birth, the artist spent his teens in California before finally settling in New York where his brand of brightly coloured neo-pop painting began to spark interest in the early 2000s.
Rochechouart's exhibition amply illustrates his original style and approach with a selection of works from 2003 to the present day. Whether figurative or abstract, the pictures teeter on the brink between strange yet realistic visions of life today. Virtually all of them were painted directly on wood panels, working without preparatory sketches or photographic models. Jules de Balincourt likens himself to a a “tourist of globalization who consumes culture visually and intellectually”. Layers of accumulated images mix references to historical paintings (i.e. exotic Gauguin’s landscapes or Jasper Johns’ maps...) together with ironic statements written in graphic letters and pixelated abstractions. Elsewhere we witness gatherings of disenchanted utopians on the roofs of giant buildings or deep in wooded landscapes. These visions of our existence today seem infused with an awareness of global society, enmeshed in modern technologies and the ambient political climate.

Many of Balincourt's signature elements such as explosions, maps and landscapes feature prominently in the fifteen paintings on display. Accompanying them for the first time is a range of material (including leaflets, posters, photos and videos) documenting three years of artists' performances, concerts and shows (as well as local festivities and yoga classes) at Starr Space, a community centre the painter opened in his studio and ran in Brooklyn. “Starr space grew organically, in 2006 Bushwick there were no bars, yoga studios, movies music venues, farmers markets or a space where the local Latin church could host a 300 person party till three followed by Sunday free communal yoga. I never thought of Starr Space as an "art project”, or in that moment did not really make the direct connection between some of the ideas in my work and what ideas or ideals Starr Space represented. But now in hindsight it is loud and clear: the connections between my work often representing "alternative" communities, removed isolated microcosms attempting something as idealistic as a better more communal based world”.

Jules de Balincourt (b. 1972) graduated from California College of Arts in San Francisco and Hunter College in New York. Recent solo exhibitions have been held for example at the Mori Museum of Art in Tokyo (2010) and at Montreal Museum of Fine Arts (2013-2014). He has participated in many other shows such as Greater New York at PS1/MoMA in New York (2005); Notre histoire... at the Palais de Tokyo in Paris (2006); Art in America: 300 Years of Innovation at the Bilbao Guggenheim Museum in Spain (2007), or more recently Parallel Universe at the Reggio Emilia Collezione Maramotti in Italy (2012) and L'Ange de l'histoire at ENSBA School of Fine Arts in Paris (2013). A 200-pages monograph on Jules de Balincourt by Rizzoli was published in December 2013 with contributions by Bob Nickas, Andrea Scott, and Eric Troncy.

Following the Rochechouart Museum of Contemporary Art’s last exhibition, Carolee Schneemann: History Works, the museum continues to show a selection of pieces made by the artist between 2000 and 2010, in particular two of her monumental works displayed in the wooden-beamed top-floor gallery at Rochechouart Castle (More Wrong Things, 2001; Precarious, 2009).

Belonging to a first generation of female artists who militated for consideration of women's art, Carolee Schneemann (B. 1939) pioneered new video, film (“expanded cinema”) and performance practices, gaining a reputation for exploring issues around the human body and the place of women in society. These recent works gathered in Carolee Schneemann.

Precarious resonate as a rebirth of historical genre painting, bringing into perspective the flood of digital images the media bombard us with, in the name of news broadcasting. A set of engravings from digital collages and video installations such as More Wrong Things and Precarious, trap spectators in crossfire of projections and reflections, illustrating clearly how this theme of media exposure has haunted Carolee Schneemann over the years. The flow of imagery and contemporary sounds and music in both works contributes to an on-going expression of her ideals and vision.

Rochechouart Museum of Contemporary Art houses a rich collection of contemporary art and the present re-hang privileges works that involve plant life, have nocturnal connotations or an aura of mystery about them.

Invited artist: Jean-François Demeure Selections from the Rochechouart Museum of Contemporary Art's Raoul Hausmann archives are on permanent display in the museum. Raoul Hausmann (1886-1971), founder of Berlin Dada, moved to the local area after the Second World War and never ceased to experiment with collage and sound poetry, seeking connections between sounds and images, between words and shapes. His work on these phenomena is brought into focus in the present exhibition which also features digital versions of his notebooks, throwing further light on the thought processes that guided this original and important artist.

Housed in an historical castle, the Musée départemental d'art contemporain's identity has been forged by a willingness to explore relations between artistic heritage from the past and contemporary creativity, as witnessed by site-specific sculptures commissioned from international artists such as Giuseppe Penone or Richard Long. Over time the museum has built up a significant collection of over 280 contemporary artworks, complemented by extensive archives of documents and collection of works by the Dadaist Raoul Hausmann.
Major renovations carried out in the late 1990s resulted in reorganisation and upgrading of the museum exhibition spaces, with a mixture of traditional "white cube" style galleries and carefully integrated historical parts of the castle such as rooms with frescos from the 16th century, towers and a massive wood-beamed castle garret.

In addition to regular presentations of the permanent collections, the museum organizes thematic or monographic exhibitions, often commissioning works from featured artists.
Examples include le Grenier du Château (Castle Garret) by Annette Messager and Christian Boltanski (1990), Thierry Kuntzel's Tu (1994) or an installation work consisting of four solid-light films by Anthony McCall in 2007. Every exhibition includes out-reach projects designed to engage with visitors and the local community, an important integral component established by the museum since its creation and an essential factor in the life of a museum situated in a rural environment.