[in cha'Allah]. Inevitably, Lahlou's work can be perceived as controversial and provocative, but rather than having a political agenda, he aims to create ambiguity and study its limits. 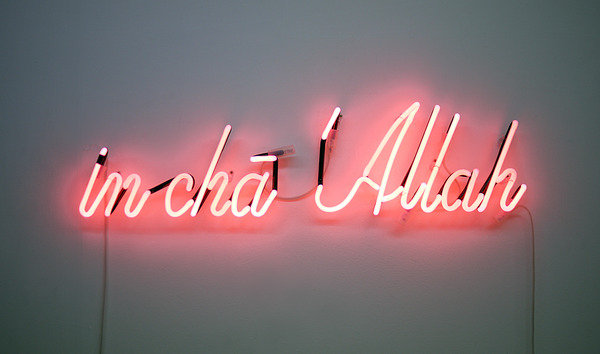 Growing up in France and Morocco with a Catholic mother and a Muslim father, the work of multifaceted artist Mehdi-Georges Lahlou manifests at the intersection of cultures. In drawing parallels between cultures and identities, he creates what could be called a surrealistic proposition--or as art critic and author Christine Vuegen calls it: a 'Lahloutopia'.

Always modifying our expectations of the body, nudity, sexuality, gender and culture, Mehdi-Georges Lahlou challenges the presumed impossible, like when he walks 18.5 miles in his signature red heels between two art galleries in different cities, or when praying on a Muslim prayer rug in the same heels in his performance 'The Call.' Inevitably, his work can be perceived as controversial and provocative, but rather than having a political agenda, he aims to create ambiguity and study its limits. In what comes off as the foolish repetition of physical movements, he tests the limits of his body's endurance. He uses these simple gestures to generate complex readings in the mind of the viewer.

With a humor that invites and sometimes leaves you with a sour taste, he plays with the idea of what is assumed to be real by creating a fictive take on reality: 'At which moment will what you see become what actually is?'

In the piece 'Devout with the Niqab,' Mehdi-Georges Lahlou holds an ecstatic movement for seven hours, three days in a row at 110 degrees. What from afar was assumed to be a Madonna figure turned out to be the artist dressed in a niqab when viewed up close. Different religious perceptions interact again in the piece '72 Vierges,' where he creates multiple identical sculptures of himself wearing a veil. The white color of the sculptures could represent mourning for Muslims just as well as innocence for Catholics.

Karen Renders (1957-2012), former director of Art Brussels, describes his work as follows: 'Lahlou's installations and performances are all about crossing limits, cultural and religious boundaries and challenging literally his physical limits... As Lahlou grew up in a mixed religious environment (…), he experienced our multicultural and multiform society in daily life. This is reflected in his work in a humoristic, intelligent kind of way.'