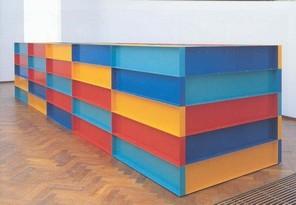 This exhibition 'Encounters with Modernism', places the works of young artists and of the generation which preceded them alongside and over against each other. Dialogues arise between the individual artworks in the various ensembles (surrounding abstraction, expressionism and conceptual developments), through which the public can distinguish both the parallels and differences.

While in early modernism there is regularly a deliberate contrast with dominant currents or tendencies, artists who began to work after 1970 have a less dogmatic attitude and, as compared with their predecessors, there is instead an acceptance, and even a willingness to make use of the achievements of modernism.

In this way the collection exhibition takes on a laboratory function, where the public can draw various connections and assess with their own eyes how, and in what ways modern art was shaped in various concepts, expressions and manifestations. Finally, questions can be asked regarding the value and significance of the individual works, and whether they fulfil the innovative aspirations of modernism.

By also emphatically including the work of the newest generation of artists in the exhibition, the public can view modernism from a contemporary perspective. Among this younger generation new talents can be distinguished who will later have had a major, influential impact on the development of modern art, in the same way that, for instance, artists who were still at the beginning of their careers in the 1970s are now considered as modern classics of the 20th century.

But if the work of Donald Judd, Georg Baselitz, Carl Andre and Bruce Nauman has in the meantime come to be fully understood, what significance their work has for the development of modern art is just as much open to discussion as the work of Marcel Duchamp, Pablo Picasso and Piet Mondriaan.

This travelling exhibition will be seen successively at the Shanghai Art Museum (January 13 through February 20), the Singapore Art Museum (March 18 through June 6), the Pinacoteca SÃ£o Paulo (July 18 through the end of September) and the Museo de Arte Moderna Rio de Janeiro (mid-October to the end of December).

The Stedelijk Museum, which over the next couple of years will have less space to exhibit its collection extensively, sees this travelling exhibition as a good opportunity to reach wider audiences in major cities where until now few such large surveys of 20th century art have been seen. The Stedelijk Museum is pleased that this project has been made possible through the ABN AMRO Bank. The ABN AMRO Art Foundation itself holds an extensive collection of contemporary art. Five paintings which will be part of this exhibition have also been selected from their collection.

A catalogue will appear to accompany the exhibition, containing articles on the development of abstractionism, geometric abstraction, expressionism, conceptual developments and the use of new media.