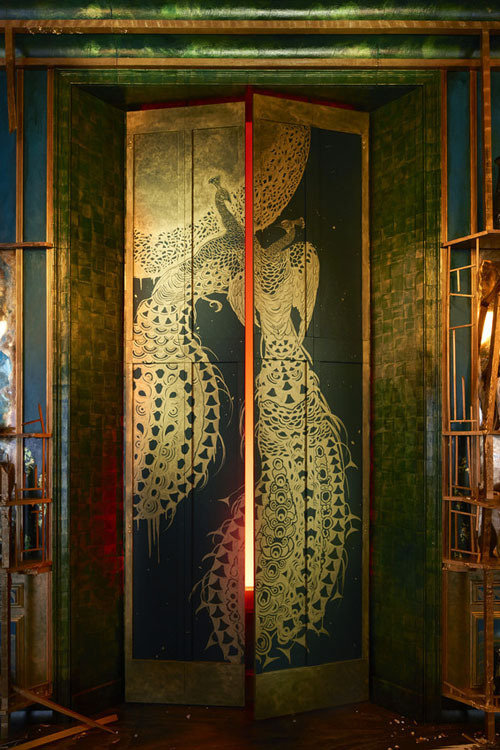 With the rapid disappearance of photochemical film, many visual artists stand out among the group of dedicated filmmakers who choose to use light-sensitive film rather than digital formats. Museums and galleries thus become a critical part of efforts to preserve a technology and discipline that is beginning to fade. The Dying of the Light: Film as Medium and Metaphor features the work of 6 artists - Rosa Barba, Matthew Buckingham, Tacita Dean, Rodney Graham, Lisa Oppenheim, and Simon Starling - who capitalize on film's particular visual, material, aural, and even metaphoric characteristics. Film's associations with light, motion, perception, time - and now obsolescence - are among the themes evident in the MASS MoCA exhibition, as is the history of film and its close relationship to the technological advances of the last century and a half. A mix of atmospheric, documentary, and sculptural works, the ensemble of works in the exhibition speak to the past and the future, vision, technology, beauty, faith, and even death. The Dying of the Light is on view beginning March 29, 2014, when an opening reception will celebrate the exhibition.

In The Green Ray (2001), Tacita Dean focuses on the setting sun, hoping to witness the moment in which the atmosphere refracts the light and causes a flash of green. The optical phenomena - well known to those who spend their days at sea, though visible only under certain conditions, has achieved mythic status, and has come to be seen as a harbinger of great change. Shooting in a remote location in Madagascar, Dean not only successfully documented the rare phenomenon on celluloid film, but succeeded where others - recording in digital - failed to register the elusive green ray.

Rodney Graham's Torqued Chandelier Release (2005) conflates his memory of a scene of a falling chandelier in the 1952 film "Scaramouche" and Sir Isaac Newton's famous bucket experiment demonstrating the properties of rotational motion. A chandelier on a twisted rope is let loose and filmed on high-speed film as it spins first in one direction and then its reverse. In this seemingly simple study of light and movement, Graham captures the essence of the moving image and its magic.

Lisa Oppenheim's Yule Log (2009) takes the New York City television tradition of broadcasting a Christmas hearth as its starting point. Oppenheim printed the image on film 28 times, one frame for every year of broadcast. Each iteration is one generation further removed from the original, transforming a clear likeness to a painterly play of light and shadow, and becoming a visual representation of the disintegration of memory. Oppenheim's fire naturally leads to Smoke (2011-13), the title of her second work in the exhibition. On two imposing screens, the artist projects images of smoke she found online. Oppenheim converts web-sourced smoke clips into 35 mm film, then makes contact prints which she exposes and solarizes with fire. Scanned and strung together as an animation, the images are a rich hybrid of analog and digital.

Filmed from a helicopter, Rosa Barba's 35mm film The Long Road (2010 - titled after the poem by Robert Creeley which is part of its soundtrack - circles above an abandoned race car track in the California desert. Referencing large Land Art works, the film is projected here on a theater-size screen bisecting the large central gallery on the museum's second floor. The revolving image recalls the looping of the film itself and emphasizes the significance of time on both human and geological scales and in both film and sculpture. A second and stunning sculptural work in the midst of oversize screens and screening rooms, Stating the Real Sublime (2009), emphasizes the connection between the two mediums. Held only by the film rotating through its body, a functional projector floats in the gallery, projecting a simple white light through the film that is its own support, an image of possibility on which dust, scratches, and other traces of time slowly build.

Five years before the Lumiere Brothers debuted their first film, Louis Le Prince had developed a functional motion picture system. Yet when the little-known inventor mysteriously vanished from a train between Paris and Dijon in 1890, he changed the course of the medium's history and future. In False Future (2007), Matthew Buckingham restages a static shot from one of Le Prince's four films and projects it in 16mm onto a cloth; the installation echoes accounts of Le Prince's workroom. A voice-over in French speculates on Le Prince's life.

While making Black Drop (2012) Simon Starling documents the 2012 transit of Venus across the sun - in what the work proposes might be the last time it will be captured on celluloid (the next transit is in 2117). The narrative unfolds as the film shows an editor in a 35mm editing booth trying to make sense of archival footage and Starling's own footage of the 2012 transit. The work examines the connection between the history of photography and moving image technology and advances in astronomical observation.

Given the challenges of projecting film in a gallery setting, where films are looped continuously instead of screened at specific times, leaving equipment susceptible to break and malfunction, the exhibition will be framed as an opportunity to share with visitors a behind-the-scenes look at the care of these mediums and the need for its preservation. Just as the artists leave the projectors in full view - a central component of their installations - The Dying of the Light will share the rituals of maintenance and repair that are required to keep the projections running.

Sponsorship
This exhibition is supported by the Horace W. Goldsmith Foundation and the Massachusetts Cultural Council.

About the Artists
Rosa Barba (b. 1972, Sicily) approaches film in a way that is more sculptural than it is filmic; she often utilizes the mechanisms of the medium's display - projectors, light, celluloid film itself - as sculptural material, creating work that transcends the traditional space of the screen. Barba exhibits widely internationally. She was recently included in Performa, New York, and in 2013 was in residence at the Chinati Foundation, Marfa, Texas, and Artpace, San Antonio. She is represented by Gio' Marconi, Milan. She lives and works in Berlin.

Matthew Buckingham (b. 1963, Nevada, Iowa) utilizes narrative, fiction, and history in his films to reframe the viewers' experience and understanding of the past. His work has been exhibited widely in distinguished institutions, including the Museo Nacional Centro de Arte Reina Sofía, Madrid; The Brooklyn Museum; and the Art Institute of Chicago; and can be found in the collections of Tate Modern, London; and the Museum of Modern Art and the Metropolitan Museum, New York; among others. Buckingham is represented by Murray Guy, New York. He currently lives in New York.

The preeminent artist working in film today, Tacita Dean (b. 1965, Canterbury, England) is known for her lyrical, meditative narratives which often reverberate with themes of time and memory. Her monumental, 2011 installation FILM at the Tate's Turbine Hall garnered her international attention and provided a platform for her efforts to preserve her medium. She is represented by Frith Street Gallery, London, and Marian Goodman Gallery, New York. Dean currently lives in Berlin.

For Canadian artist Rodney Graham (b. 1949, Abbotsford, British Columbia), the medium of film is only one element of a much larger practice which incorporates photography, performance, video, music, writing, and painting. His work has been shown in institutions all over the world, and in 2011 he was awarded the Audain Prize for lifetime achievement in visual arts, British Columbia. He is currently represented by Hauser & Wirth, Zurich; 303 Gallery, New York; Donald Young Gallery, Chicago; and Lisson Gallery, London. Graham lives and works in Vancouver.

Lisa Oppenheim (b. 1975, New York) melds digital and analogue processes to create her film, engaging contemporary modes of image-making and replication, while retaining the qualities of early experimental film. Her work is in the collections of the Museum of Modern Art and the Solomon R. Guggenheim Museum, New York, among others. She is represented by The Approach, London, and Galerie Juliette Jongma, Amsterdam. Oppenheim lives and works in New York.

In both his sculpture and his films, Simon Starling (b. 1967, Epsom, England) combines historical research with an interest in materials to tell the complex stories behind the subjects of his inquiries. In 2005 he was awarded the prestigious Turner Prize. He has been the subject of solo exhibitions at numerous international museums and created a major installation for MASS MoCA's signature gallery in 2008. Starling lives and works in Copenhagen and is represented by The Modern Institute, London; neugerriemschneider, Berlin; and Casey Kaplan Gallery, New York.

About MASS MoCA
MASS MoCA is one of the world's liveliest (and largest!) centers for making and enjoying the best new art of our time, across all media: music, art, dance, theater, film, and video. Hundreds of works of visual and performing art have been created on its 19th-century factory campus during fabrication and rehearsal residencies in North Adams, making MASS MoCA among the most productive sites in the country for the creation and presentation of new art. More platform than box, MASS MoCA strives to bring to its audiences art and shared learning experiences that are fresh, engaging, and transformative.

Painter Darren Waterston's installation Filthy Lucre -- the centerpiece of Uncertain Beauty -- is a contemporary re-imagining of James McNeill Whistler's 1876 decorative masterpiece Harmony in Blue and Gold: The Peacock Room. Waterston became fascinated with The Peacock Room both for its unrivaled union of painting and architecture and for its dramatic story of patronage and artistic ego.

The original -- the dining room of the London home of shipping magnate Frederick Leyland -- was designed to showcase Leyland's collection of Asian ceramics, with Whistler's painting La Princesse du pays de la porcelaine (1863-64) featured over the mantel. Asked to consult on the color scheme for the room, Whistler took bold -- if not egregious -- liberties while Leyland and his architect were away and in a fit of enthusiasm painted the entire room -- executing his now famous peacocks over the expensive Italian leather wall panels. The collector refused to pay the artist and banned him from his house; Whistler, in response, painted an unflattering caricature of his patron titled The Gold Scab: Eruption in Frilthy Lucre (The Creditor). Conflating the words frilly and filthy, Whistler made a jab at Leyland's own "peacocking" as well as his miserliness.

At MASS MoCA Waterston reconstructs the historical room as a sumptuous ruin. Inside, viewers will find Waterston's re-interpretations of Whistler's paintings, along with stalactite-like ceiling fixtures and crumbling shelving replete with 250 hand-painted ceramic vessels.
Glaze will appear to ooze down the wall, and the shimmering central peacock mural will partially melt into the floor in a puddle of gold. A soundscape featuring voice and cello composed by the New York-based trio BETTY will be heard intermittently through the space, punctuating the silence with hauntingly beautiful reverberations. The installation hints at parallels between the excesses and inequities of the Gilded Age and the social and economic disparities of our own time. At the same time, the work raises questions about patronage and the relationships between artists, collectors, and institutions.

Darren Waterston: Uncertain Beauty also features a selection of Waterston's works on wood panel and canvas. These luminous paintings, which seem to glow from within, transport viewers to other-worldly spaces, somewhat familiar but unhinged from a particular time or place. Like Filthy Lucre, they express both the grotesque and the beautiful, hinting at utopian fantasies and Arcadian dreams, as well as apocalyptic nightmares.

Artists Dike Blair, Hugh Scott-Douglas, and collaborative duo Guyton\Walker paint, print, and project abstract images and patterns onto the surface of shipping crates. Incorporating storage and transportation containers into vivid multimedia installations, these artists explore parallels between the physical movement of artworks and the seemingly limitless circulation of visual information across media and networks in the digital age.

This exhibition is made possible by the Sterling and Francine Clark Art Institute in support of MASS MoCA and the Williams College Graduate Program in the History of Art. Special thanks to the artists; Greene Naftali Gallery, New York; and Jessica Silverman Gallery, San Francisco.