L'oeil se noie. Their work stems from a shared interest in the gaps and fissures that make up stories, as well as the challenges and promises they hold. 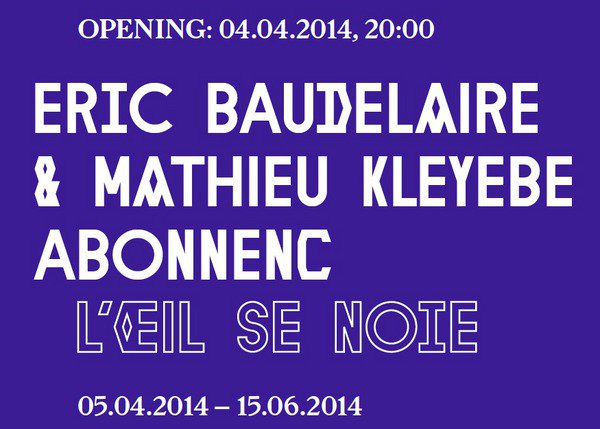 The exhibition L’œil se noie is the result of an intuitive dialogue between the two French artists Eric Baudelaire (1973, Salt Lake City, currently based in Paris) and Mathieu Kleyebe Abonnenc (1977, French Guiana, currently based in Metz). Their work stems from a shared interest in the gaps and fissures that make up stories, as well as the challenges and promises they hold.

At the heart of their practices is a desire to highlight the tensions between what has been, what seems to be, and what could have been; to pick up the traces of forgotten and unresolved questions and divert them towards uncertain destinations, out of the dead-end circuits where things and thoughts get trapped in their own finitudes. In short, L’œil se noie is about “unfinished business”, as one of the pieces in the show suggests. Sometimes quite literally, as in the case of Abonnenc’s search for the lost film Guns for Banta (1970) by Sarah Maldoror, a film dealing with the struggle for the independence in Guinea and Cape Verde that has never seen the light of day, or Baudelaire’s work The Makes based on some of Michelangelo Antonioni’s unrealized scenarios.

In other cases, their work consists more of a rewiring of connections between one sense and another, between one time and another. The film work Ça va, ça va, on continue, for example, highlights the complications implicit in remembering, representing and voicing distant histories of anti-colonial revolt and revolutionary insurrection. Chanson d’Automne, in turn, is an assemblage of clippings from The Wall Street Journal dated September 2008 that reveals a poetry of resistance within the fracture lines of a dysfunctional economic order. At odds with all laments of the ‘death of the image’ and the ‘end of history’, the works in this exhibition propose a renewed faith in the hidden potential of the present, puncturing the impasses and aporias of finitude, and giving way to the necessarily unfinished spaces for wandering and wondering.

L’œil se noie is organized in conjunction with The Fire Next Time, a two day program of interventions and screenings dealing with the militant image and its resonances (03.04.2014-04.04.2014, KASK - School of Arts Gent). Both events are organized as part of The Uses of Art – The Legacy of 1848 and 1989, a project initiated by the museum confederation L’Internationale.
More information: www.thefirenexttime.be

Opening:
Friday 4 April 2014
Public opening: 20.00
Press and professional preview (by appointment): 16.00 – 20.00
The opening will be followed by a concert at Minard theatre at 10 PM: Crazy Nigger & Gay Guerilla Julius Eastman