Belgian photographer will show a selection of his most recent work. Almost all of his work is in gradations of black and white, and the subject matter often consists of austerely furnished interiors that evoke a melancholy atmosphere. Occasionally he has done portraits of women who remain as anonymous as the spaces in which they are depicted. 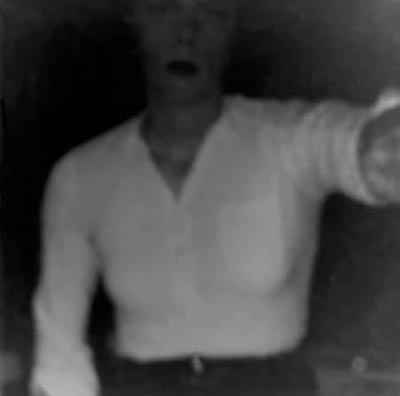 In his first museum exhibition to be held in the Netherlands, Belgian photographer Dirk Braeckman (Ghent 1958) will show a selection of his most recent work. The work of Braeckman has become widely known and appreciated in his own country, partly due to a retrospective exhibition at Ghentâ€™s SMAK in 2001 and his contributions to 2003Beaufort in Oostende and Watouâ€™s 2003 art and poetry festival. Above all, he has received considerable acclaim for his portraits of the Belgian king Albert and queen Paola. These photographs were commissioned by the Royal Palace in Brussels.

In 2002 Dirk Braeckman was granted the cultural award of the Katholieke Universiteit Leuven.

The response to the work of Dirk Braeckman has been remarkable in view of the fact that his photographs are somewhat enigmatic and not easy to grasp at first sight. Almost all of his work is in gradations of black and white, and the subject matter often consists of austerely furnished interiors that evoke a melancholy atmosphere. Occasionally he has done portraits of women who remain as anonymous as the spaces in which they are depicted. For the most part, these seem to be â€˜hotel rooms with an hourly rateâ€™ or shabby boarding houses where any attempt to renovate has been given up long ago. Braeckman photographs the dreary shower cubicles, the elevators, corridors, curtains, mattresses and frosted-glass windows. The gray photographs make these spaces appear to be even more stale than they already are in reality. Belgian art philosopher Frank Vande Veire put it aptly: â€œThe photographic haze lies across the depicted interiors like a layer of ash.â€ And Braeckman himself says, â€œBy keeping it dark and gray or by printing it out of focus, I eliminate part of the information which detracts from the essence. In this way I aim for a purified situation, into which youâ€™re thrown as a viewer. I investigate things that seem insignificant. These are all places that somehow look as though theyâ€™ve been lived in, where the space has withstood a great deal or where people have gone through a lot, though youâ€™ll never know what that was.â€

Even so, Dirk Braeckmanâ€™s concern is not the tragic aspect or the bygone events to which the wallpaper, carpet and bedspread quietly attest. He is interested in the image itself and in the direct registration of the space. The composition and the moment reveal no preconceived formal or anecdotal intentions. The image presents itself plainly at a single glance. â€œPerhaps I want to create things that are elusive. And I can do that only via photography. Youâ€™ve got an image in front of you: itâ€™s not simply formal, but you canâ€™t immediately describe it in any other way. At most you can say whatâ€™s there, but thatâ€™s not what itâ€™s about. What I want, in fact, is to take it to the point where there is nothing but that image.â€

Braeckman does not employ the static and all-inclusive type of observation (in the tradition of Bernd and Hilla Becher) that has been taking root in photography in recent years; he has opted, rather, for the ephemeral moment and the suggestiveness of the image. He is not the detached observer; he scrutinizes his subjects. The â€˜snapshotâ€™ look of his work is by no means an indication that his photographs have come about arbitrarily. The images have been determined and selected carefully, and Braeckman deliberately utilizes the potential offered to him by the medium: â€œTo me, itâ€™s about sensing and playing on certain photographic conditions â€“ the frame, the ephemerality of an exposure, the way one reads black & white or color, the blurriness, the light. I want them to keep on surprising me, never to be taken for granted by me.â€

In this respect, the quality of the printing is of great importance. Braeckman is a master of this. His prints are dark and gray, but full of distinctions and nuance. He suppresses the sharpness and detail of the image, but the blinding light of the flash is reflected on the formica table top and the plush sofa, on the shower tiles and patterned wallpaper. Texture and surface are rendered cruelly in the harsh light. It seems to be a contradiction that this very unmasking of things should be so prominent in the dark photographs of Dirk Braeckman. This contradiction emerges in another way as well: the photographs are not narrative, yet they suggest an entire history. In that sense, Braeckmanâ€™s work is never definitive. It remains open beyond the moment, beyond the context.