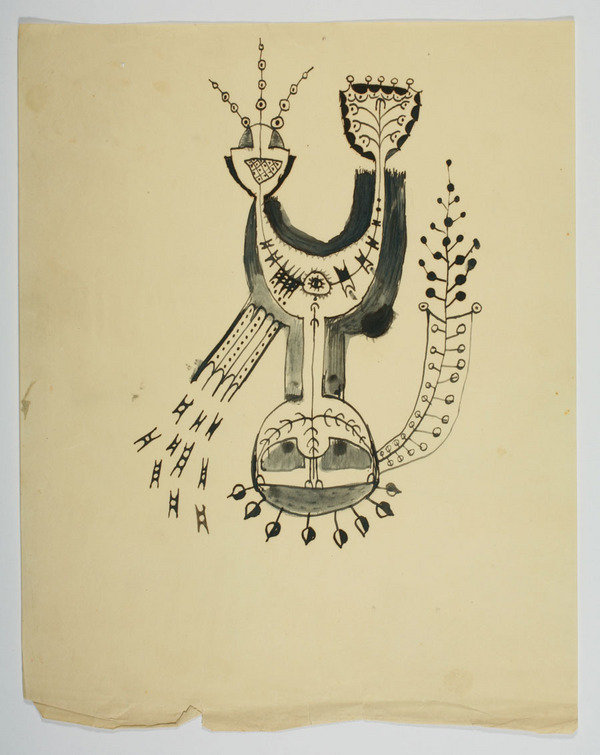 New York – The Drawing Center will present Lebbeus Woods, Architect, bringing together over 100 works from the past 35 years by one of the most influential architects in the field. Recognized beyond architecture, Lebbeus Woods (1940–2012) has been hailed by leading designers, filmmakers, writers, and artists alike as a significant voice in recent decades. His works resonate across many disciplines for their conceptual potency, imaginative breadth, jarring poetry, and ethical depth. The exhibition will feature drawings and models from the San Francisco Museum of Modern Art’s (SFMOMA) collection, along with key loans from other major design collections. Lebbeus Woods, Architect is curated by Joseph Becker, Assistant Curator of Architecture and Design, and Jennifer Dunlop Fletcher, Helen Hilton Raiser Associate Curator of Architecture and Design, SFMOMA. Prior to opening at The Drawing Center, this exhibition premiered at SFMOMA, and toured to the Eli and Edythe Broad Art Museum at Michigan State University.

Woods worked cyclically, returning often to themes of architecture's ability to transform, resist, and free the collective and the individual. As an architect whose work lies almost solely in the realm of the imagined, proposed, and the unbuilt, his contributions to the field opened up new avenues for exploring, charting, and inscribing space. Lebbeus Woods, Architect provides a thematic, rather than chronological, framework for understanding the experimental and timeless nature of Woods's work.
Acknowledging the parallels between society’s physical and psychological constructions, Woods depicted a career-long narrative of how these constructions transform our being. Working mostly, but not exclusively, with pencil on paper, Woods created an oeuvre of complex worlds—at times abstract and at times explicit—that present shifts, cycles, repetitions within the built environment. His timeless architecture is not in a particular style or in response to a singular moment in the field; rather, it offers an opportunity to consider how buildings can impact the individual and the collective, and reflect contemporary political, social, and ideological conditions, and how one person contributes to the development and mutation of the built world.

In 2011, Woods wrote: "In my work, architecture is meant to embody an ideal of thought and action, informed by comprehensive knowledge of the physical world." The exhibition explores Woods's evolutionary thinking through the recurring themes in his projects, including the political, ethical, social, and spatial implications of built forms. Many of Woods's projects addressed cities damaged by war, such as Zagreb and Sarajevo, or damaged by nature, as in the San Francisco earthquake drawings. Additional works considered political divisions of space, like in Havana, Berlin, or Jerusalem. Woods also explored alternative architectures, which could complement and provoke existing tropes, as seen in Nine Reconstructed Boxes (1999). And possibly further afield, Woods suggested entirely new approaches to organizing space, as seen in his Centricity (1987–88) and Conflict Space (2006) series.

ABOUT LEBBEUS WOODS
Born in Lansing, Michigan, Woods studied at the Purdue University School of Engineering (1958– 60) and the University of Illinois School of Architecture (1960–64). He worked for Eero Saarinen and Associates and Kevin Roche John Dinkeloo Associates (1964–68) before moving into private practice. Woods concentrated on theory and experimental projects from 1976 on; he exhibited, lectured, and published his projects worldwide, and wrote numerous articles on architectural practice and theory. Woods was a professor of architecture at the Irwin S. Chanin School of Architecture at The Cooper Union, where he taught until his death in 2012. In addition to SFMOMA’s holdings—the most in-depth institutional collection of the artist’s work to date—his works are held in the collections of the Museum of Modern Art, New York, Whitney Museum of American Art, MAK Vienna, and the Getty Research Institute. Woods's projects and writing can also be explored in the archives of his blog at lebbeuswoods.wordpress.com.

Friday, April 18 at 6:30pm
The Drawing Center will host a conversation between curator Florence Ostende and artist Franz Erhard Walther on aesthetics, space, and architecture as part of the ART2 program. ART2 is presented in collaboration with the Institut français, the French Ministry of Culture and Communication, and FACE (French American Cultural Exchange).

Thursday, May 8 at 6:30pm
Internationally renowned contemporary music ensemble, JACK Quartet, will perform compositions inspired by the encounter of music and mathematics. The concert is presented in collaboration with the Estate of Lebbeus Woods.

Thursday, May 29 at 6:30pm
A screening of the film Lebbeus Woods and Steven Holl: The Practice of Architecture will be followed by a conversation between architect Steven Holl and producer Michael Blackwood.

PUBLICATION
To accompany Lebbeus Woods, Architect, The Drawing Center will produce an extensively illustrated 160-page edition of the Drawing Papers series that will include essays by Jennifer Dunlop Fletcher and Joseph Becker, as well as an introduction by Brett Littman.

CREDITS
Lebbeus Woods, Architect is organized by the San Francisco Museum of Modern Art. The exhibition at The Drawing Center is made possible by the generous support of Elise Jaffe + Jeffrey Brown, Steven Holl + 32BNY, Edward Cella Art + Architecture, Friedman Benda, and Stéphane Samuel and Robert Melvin Rubin. Additional support is provided by the National Endowment for the Arts and the New York State Council on the Arts with the support of Governor Andrew Cuomo and the New York State Legislature.
Special thanks to the Estate of Lebbeus Woods.

New York – The Drawing Center presents Len Lye: Motion Sketch, curated by Gregory Burke, Executive Director/CEO of the Mendel Art Gallery and Remai Art Gallery of Saskatchewan, and Tyler Cann, Associate Curator of Contemporary Art at the Columbus Museum of Art and Len Lye Curator-at-Large for the Govett-Brewster Art Gallery. The first solo exhibition of the work of Len Lye in an American museum explores the filmmaker’s multidimensional practice specifically in relation to drawing. Lye’s kinesthetic approach to line—related to Surrealist automatism and anticipating aspects of Abstract Expressionism—also informed his practice in painting, photography, film, and sculpture. Not limited to works on paper, the exhibition will also reveal how Lye’s concept of "doodling" underpinned his approach to much of his work.

Len Lye: Motion Sketch includes a selection of paintings, drawings, and photograms, never before seen in the United States. In The Drawing Center’s Lab gallery, an extensive film program is presented on video, including such landmark films as Tusalava, 1929; A Colour Box, 1935; and Free Radicals, 1957/1979.

Len Lye’s career was marked by a lifelong fascination with movement and an aspiration to compose motion; the movement of the drawing hand was an important touchstone for his works in various media. In New York, Lye is now well-known for his animated experimental films. In the 1920s, however, Lye began to make what he termed “motion sketches”; abstract drawings that attempted to render the movement of his subjects, rather than their appearance. Describing his drawing practice in his own carefree prose, Lye said that doodling, “cultivates a vacuous seaweed-pod state of kelp as a skull which is attached to a pencil betwixt the arm and the fingers held doodling in turn ‘twixt you and the paper in a rather bemused, empty, harmonious state of an attitude, eyes periphering said paper.”

ABOUT LEN LYE
Len Lye was an expatriate New Zealand artist who migrated to England in the 1920s after sojourns in Australia and Samoa. His 1935 film A Colour Box pioneered the use of direct filmmaking and is generally considered to be one of the most significant works in the history of animation. His films are held in many archives, including the British Film Institute, the Museum of Modern Art, New York, and the Pacific Film Archive at the University of California, Berkeley.
In 1943 Lye moved to New York and lived there until his death in 1980. In New York, he continued to make films but also became known for his work as a kinetic sculptor; his sculpture was linked to his films as a means of "composing motion.” Lye’s sculptures are held in the collections of the Whitney Museum of American Art, the Art Institute of Chicago, the Albright- Knox Art Gallery, and the Berkeley Art Museum. In accordance with Lye’s wishes, after his death much of his work went to the Govett-Brewster Art Gallery, one of New Zealand’s foremost public contemporary art museums, where it is managed on behalf of the Len Lye Foundation, which owns the works.

Sunday, May 11 at 11am
Walkthrough with exhibition co-curator Gregory Burke, and Brett Littman, Executive Director of The Drawing Center.

Thursday, May 22 at 6:30 pm
Writer, editor, and curator Wystan Curnow examines the New York experience of the New Zealand-born artist Len Lye, asking whether his work belongs to the history of New Zealand art or America's or to some combination of the two.

Sunday, May 25 at Anthology Film Archives, 32 Second Avenue at 2nd Street
A selection of Len Lye films will be screened to celebrate Anthology’s recent acquisition his work. See anthologyfilmarchives.org for full schedule.

PUBLICATION
To accompany Len Lye: Motion Sketch, The Drawing Center will produce an extensively illustrated edition in the Drawing Papers series that will include an introduction by Brett Littman and an essay by Gregory Burke and Tyler Cann, as well as a text by Lye himself describing his artistic process.

CREDITS
This exhibition is presented by the Drawing Center in collaboration with the Govett-Brewster Art Gallery (New Plymouth, New Zealand) and draws primarily from the Len Lye Foundation Collection.

Len Lye: Motion Sketch is made possible with the support of Creative New Zealand.

ABOUT THE DRAWING CENTER
The Drawing Center is the only not-for-profit fine arts institution in the country to focus solely on the exhibition of drawings, both historical and contemporary. It was established in 1977 to provide opportunities for emerging and under-recognized artists; to demonstrate the significance and diversity of drawings throughout history; and to stimulate public dialogue on issues of art and culture.