An overall installation by Sophie Langohr (*1974) and Jacques Charlier (*1939); two generations meeting and communicating with each other, two perspectives of the holiness, yesterday and nowadays... 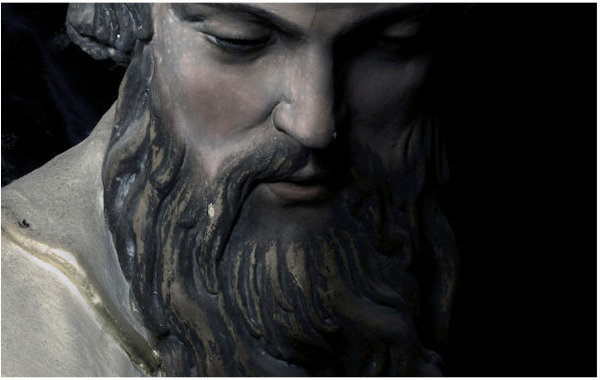 The ikob celebrates Easter... with an overall installation – Sophie Langohr (*1974) and Jacques Charlier (*1939); two generations meeting and communicating with each other, two perspectives of the holiness, yesterday and nowadays...

“But for the present age, which prefers the sign of the thing signified, the copy to the original, representation to reality, appearance to essence... truth it considered profane and only illusion is sacred. Sacredness is in fact held to be enhanced in proportion as truth decreases and illusion increases, so that the highest degree of illusion come to be the highest degree of sacredness.” Feuerbach, Preface to the second edition of The Essence of Christinanity quoted by Guy Debord in The Soc iety of the Spectacle

“From the stock of a museum, Sophie Langohr unearthed fifteen statues of the Vir gin Mary in the Saint - Sulpice style, which today represent the purest form of religious knick - knack and the beginnings of a semi - industrial art. The artist confronts the outmoded faces with the ones found on the internet of the current muses that incarnate the big brands of the luxury industry.

As diptychs, these transfigurations give us the consummate illusion of a particularly dreaded cinema - photo - digital aesthetics. Pushing the desecration even further, Langohr uses the tricks of the shooting and fashion photography to impose all the glory and the celebrity of the current models and stars on the saints, which were sculpted in 1640 by Jérémie Geisselbrunn and intended for the Church of the Friar Minors in Cologne. Today they stand on the pillars of the Saint - Nicholas church in Eupen. These are t he icons of the Fathers and the Apostles – frozen in this unexpected second (of) eternity. The casting is truly singular.

Jacques Charlier has also been exploring the fake ideal of the transubstantiation for quite some time, observing the theologies of a rt and the objet d’art which is seen as redeeming. The latter is appropriated by the market which, as the artist says, is capable of transforming the slightest draft into a transfigured object, under the strategic gaze of a global curie. [...]

From Leda to the twins of the Doublure du Monde, from Saint Rita, the patron of lost and impossible causes – of which art wouldn’t be the least – to Melusine or Morgan, art is a disenchanted physical reflection, the sign that the present could be followed by the past, an anguish that is generated by melancholy. The image of Saint Rita, the turmoil, much more than that of Marilyn or Tina Turner, he argues. As a last resort facing a society in disarray, Sergio Bonati adds, it is this Saint - Sulpice inspired image that Jac ques Charlier often ironically evokes, referring to an increasingly instrumentalized art market and history. Coming back to certain forms of devotion, could art thus be a sort of ex - voto?”
(Excerpts of a text by Jean - Michel Botquin, Galerie Nadja Vilenne, Liège)
* Thanks to the outstanding support of the Province de Liège, new works of both artists and a catalog are produced on the occasion.