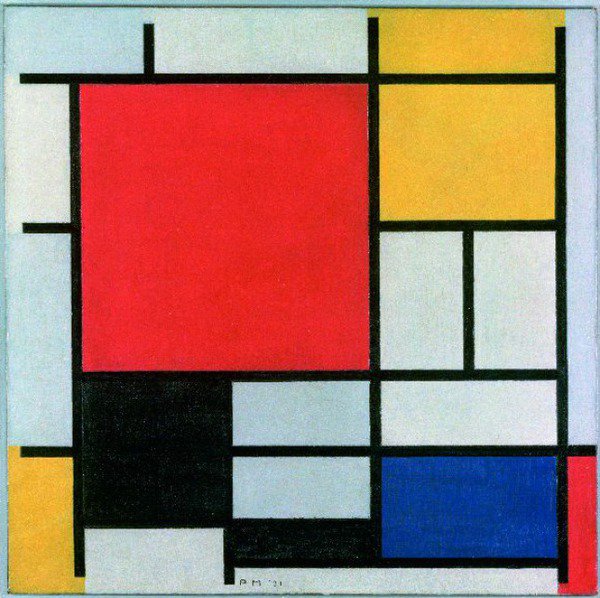 Turner Contemporary offers an exclusive UK viewing of the first exhibition to consider the significance of colour during Piet Mondrian’s early career. Mondrian and Colour explores Mondrian’s (1872-1944) practice, tracing the painter’s use of colour from figuration to early abstraction. Bringing together around 50 paintings by the artist from the Gemeentemuseum Den Haag and other collections in Europe and the USA, the exhibition will demonstrate that Mondrian’s abstract works were not simply mathematical exercises in form but also expressed his search for a new universal harmony.

This first exhibition on the significance of colour in the paintings of Mondrian will investigate his artistic career beginning with the earthy paintings of his early work, his paintings in red and blue which arose from his interest in theosophy and the colour fields he painted in the period following 1921. In the landscapes he created shortly after 1900, Mondrian painted the rays of the sun and the glow of the moon in order to make a new statement about colour. He was no longer interested in capturing a fleeting external reality in the Impressionist sense; instead, his goal was to express spirituality in painting and return it to its essential nature. In 1921, Mondrian decided to paint only in primary colours which led to his abstract works. Celebrating the pioneer of abstract art, Turner Contemporary offers a unique UK opportunity to view a large body of Mondrian’s early career in a new context.

Alongside this exhibition, Turner Contemporary will also show a group of works by contemporary artist Spencer Finch (born 1962, New Haven, CT) whose poetic installations make visible the fleeting, temporal nature of the observed world. Interested in the specificities of light and colour, his works are often made in response to an artistically or historically charged time and place, from the light in Emily Dickinson’s yard in Massachusetts (Sunlight in an Empty Room, 2004) to the wind blowing across Walden Pond over a period of two hours, two minutes and two seconds in 2007. Drawing also on moments in art history such as Monet’s water garden at Giverny (Painting Air, 2012), Finch will also select a group of works by JMW Turner as part of his exhibition.

Turner Contemporary is working in partnership with Tate Liverpool, who will present the concurrent exhibition Mondrian and his Studios: Abstraction into the World from 6 June until 21 September 2014. Mondrian and his Studios considers not only the artist’s importance in the field of abstraction, but also the complex relationship between his artworks and the space around them. The exhibition will focus on this connection between painting and architecture after Mondrian’s move to Paris in 1911, with a reconstruction of his studio at 26 Rue du Depart, Paris being a major highlight of the display. Together, the exhibitions will focus the UK’s attention on this pioneer of abstract art, timed to coincide with the 70th anniversary of his death. Mondrian. Colour runs at the Bucerius Kunst Forum in Hamburg, until 11 May 2014.

Turner Contemporary presents a major exhibition of work by American artist Spencer Finch. Finch’s first solo exhibition in an English public gallery in over 5 years brings together new and recent works by the artist, all of which reflect on the changing coastal light of Margate and other sites. The exhibition will be accompanied by a group of JMW Turner’s watercolours selected by Finch from the Tate collection.

Spencer Finch (born 1962, New Haven, CT), commissioned to produce an installation for New York’s High Line in 2009 and selected by Crossrail to create a permanent monumental work for Paddington Station, is known for his poetic artworks that distil his observations and experience of the world into glowing installations of light and colour. Finch, who works in a range of media, is particularly interested in the specificities of light, colour, memory and perception and his works are often made in response to an artistically or historically charged time and place such as a shadow falling in Monet’s garden at Giverny, or the colours in a series of Turner paintings. Other works deal with more personal spaces and experiences, seeking to capture the colours of places and objects in his dreams over an extended period of time or the exact colour and intensity of sunlight falling on the wall of his New York studio.

Conceived for Turner Contemporary’s North Gallery, the exhibition includes a large-scale suspended ‘cloud’ sculpture, made from simple translucent filters that subtly alter its transparency and opacity as the natural light in the space changes throughout the day, recreating the effect of a passing cloud. Back to Kansas (2013) replicates colours from scenes in The Wizard of Oz in a grid of painted squares, scaled proportionally using the original aspect ratio in which the famous movie was projected. As daylight fades, the colours gradually evaporate, reversing the original film’s transition from black and white to Technicolor in a work that encourages slow, focused looking and gives a knowing nod to twentieth-century abstraction. The exhibition also presents new work by the artist, including a brightly coloured fluorescent light sculpture, made in response to the ever- present horizon line in Margate, and a group of drawings in an ongoing series recreating the changing natural light on the artist’s studio wall over time.

Among the group of seven works on paper by JMW Turner, which have been selected by Spencer Finch to accompany his exhibition, is the late watercolour sketch A Wreck (possibly related to 'Longships Lighthouse, Land's End') 1834-40, which the artist keeps a postcard of in his New York studio. Finch is particularly interested in the dynamic between abstraction and representation in these works, which are primarily views of Margate and the Kent coast.

About Spencer Finch
Spencer was born in New Haven, Connecticut in 1962 and lives and works in Brooklyn, New York. He studied comparative literature at Hamilton College, Clinton, New York and undertook an MFA in sculpture at the Rhode Island School of Design. Finch’s solo exhibitions include Back to Kansas part of SFMOMA’ s Project Los Altos (2013), Indianapolis Museum of Art (2013), the Art Institute of Chicago (2011), Massachusetts Museum of Contemporary Art, North Adams, Indiana (2007) and Portikus, Frankurt am Main (2003). He participated in the Folkestone Triennial in 2011 and the 53rd Venice Biennale in 2009.