(T)here, installations. Speaking elsewhere about his relationship with viewers, Ohanian says, ''Whether they are contemplating or understanding, the freer they feel vis-a-vis my work, the happier I am. A piece is first and foremost a receptacle, it gives off something of course, but it is also a structure that gets something in return as well.'' 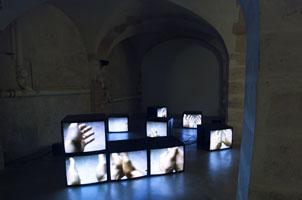 The Centre for Contemporary Images is pleased to present [T]HERE, a solo show by Melik Ohanian featuring several pieces, White Wall Travelling (1997), The Hand (2002), Sign Word Book (2003), You are mY destinY (2003) and Selected Recording.

In the first gallery, pieces of wooden furniture invite visitors to enter into the artist's world. Speaking elsewhere about his relationship with viewers, Ohanian says, ''Whether they are contemplating or understanding, the freer they feel vis-Ã -vis my work, the happier I am. A piece is first and foremost a receptacle, it gives off something of course, but it is also a structure that gets something in return as well.'' A piece of furniture serves as a support for Sign Word Book, an edition of books created during an art event at BF15 in Lyon in May 2003. For the event, the artist invited Armenian refugees and political asylum seekers to graphically erase the definition of the words from a popular French dictionary, the Larousse illustrÃ©; the result is a blank book in which words, graphs and illustrations float on the page.
You are mY destinY, an installation first mounted in 2003 in Atlanta, is based on Ohanian's chance discovery of a man with the same name living in New York. Born in France of Armenian descent, the artist was spurred by this discovery to look into his roots. The result was his reimagining of the Armenian exile in the form of a diary that viewers can consult. These installations are accompanied by three photographs from the series Selected Recording.

In the main hall, viewers will discover the film White Wall Travelling. The piece's starting point was the artist's project to go and work with ''500 Sacked Dockers'' of Liverpool, who had been on strike for two years. The idea was to write a fictional story with them, the resulting text to be superimposed over the image. As is often the case in Ohanian's art, however, the project changed as things developed, modified by the reality he came up against in the field and the work. Of the three succeeding tracking shots through the deserted docks of Liverpool, only the first comes with subtitles transcribing a real conversation between three old out-of-work longshoremen. Between the three filmed sequences combining three different time frames, an interval devoid of any image gives way to the soundtrack.

The Hand, the fifth piece that Ohanian is showing at the Centre pour l'image contemporaine, features nine pairs of hands that have been filmed separately and which together build a fragmented image on nine monitors scattered around the venue.

Melik Ohanian. Born in 1969 in France. Lives and works in Paris.
Ohanian has shown his work at several solo exhibitions in the past: at the Galerie Chantal Crousel in Paris, the Museum in Progress in Vienna, the Galerie BF15 in Lyon and the Palais de Tokyo in Paris. He has also taken part in a large number of collective shows, notably at the MusÃ©e d'art moderne de la Ville de Paris, Zurich's Kunsthalle. Art Unlimited in Basel, SFMOma in San Francisco, the Museum of Modern Art of KyungjoÃ¼o in South Korea and in Erevan in Armenia.